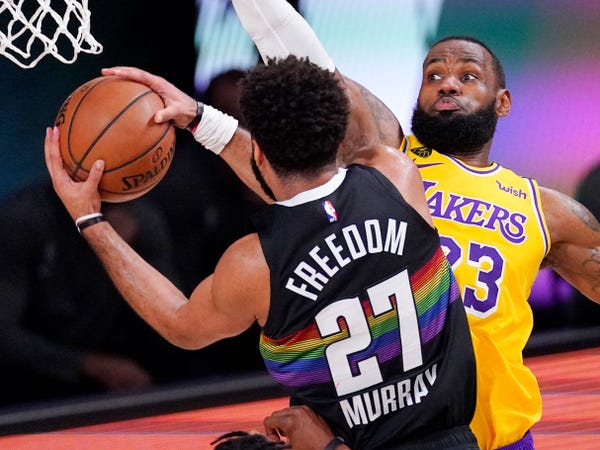 Jamal Murray's ridiculous shot-making was on full display in Game 4 of the Western Conference Finals against the Los Angeles Lakers.

Entering the series with a 2-1 deficit, Murray pulled out all of the stops, putting up 32 points, including one bucket that was stolen straight out of Michael Jordan's playbook.

In the waning minutes of the second quarter, Murray took the ball at the top of the arc and drove hard down the lane. As he went up for his shot, he was met by LeBron James in the air, but rather than take him head on, Murray went under and around James to pull off a shot that takes multiple viewings to fully comprehend.

Murray's layup earned high praise from Manu Ginobili, himself the author of some astounding layups over his career.

The shot was also immediately compared to some of Jordan's most iconic layups, including his hand-switch in the NBA Finals against the Lakers and his up-and-under against the New Jersey Nets.

Unfortunately for Murray and the Nuggets, his crafty shot was only worth two points, and Denver would go on to lose the game 114-108, trailing the Lakers 3-1 in the series. That said, the Nuggets have already erased 3-1 deficits twice through the first two rounds of the playoffs.

If they can do it again, chances are it'll involve a few more ridiculous shots from Murray.