James Middleton has surprised his French fiancée Alizee Thevenet by shaving off his beard for the first time in seven years.

Taking to Instagram, Kate Middleton’s brother, 32, shared a video where he can be seen taking a razor to his stubble, and captioned the post: ‘It’s been 7 years since I last shaved, so I decided to surprise Alizee…’

In the short clip, filmed during lockdown where he is isolating at his parents Carole and Michael’s very lavish home in Bucklebury, he can be heard saying: ‘Seeming as Alizee and myself were due to get married this month, she’s never seen me without a beard.

‘I thought it was about time to show her what’s behind it. In fact, what I’m most worried about is that these lots might not recognise me after. Say goodbye!’ 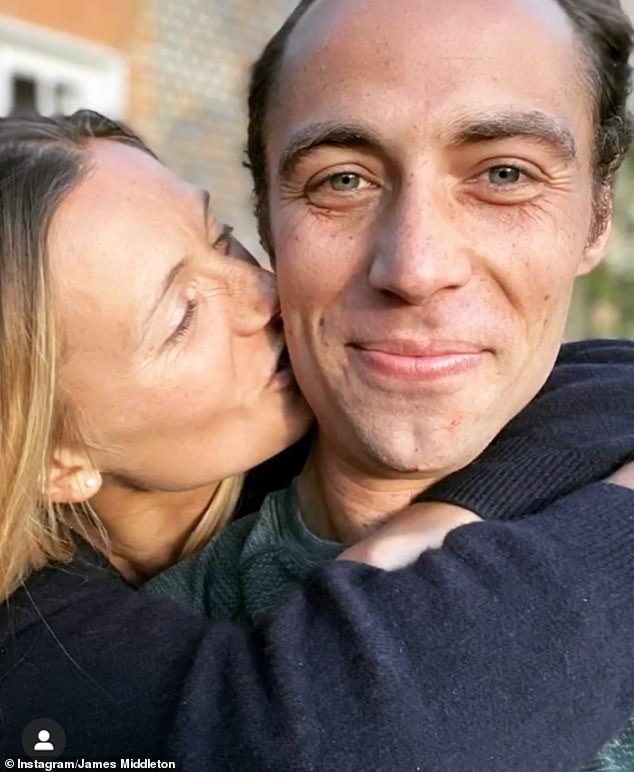 James Middleton, 32, has surprised his fiancee Alizee by shaving his beard off for the first time in seven year (pictured together, after) 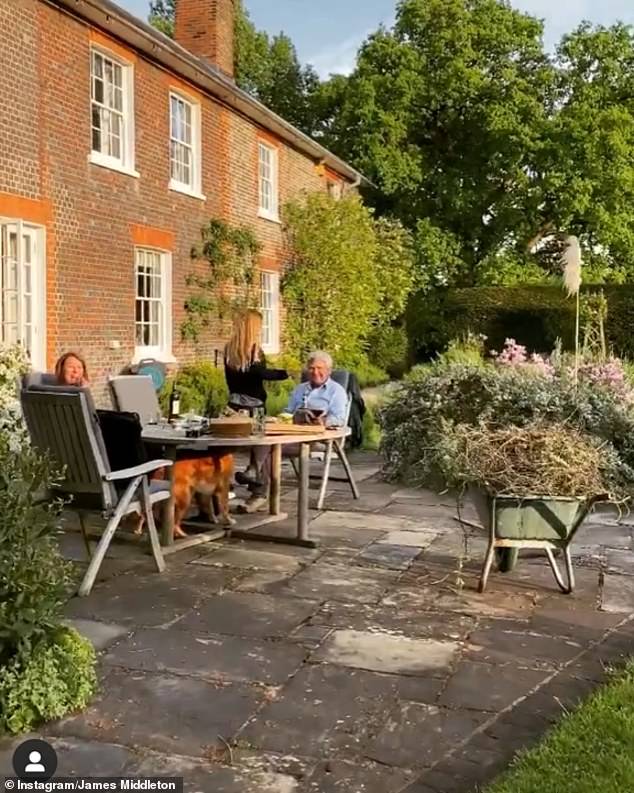 A shocked Alizee runs over to him and squeals: ‘Ahhh omg! It’s so weird! Even when I kiss you it’s different!’ Pictured, with James’ parents Michael and Carole Middleton 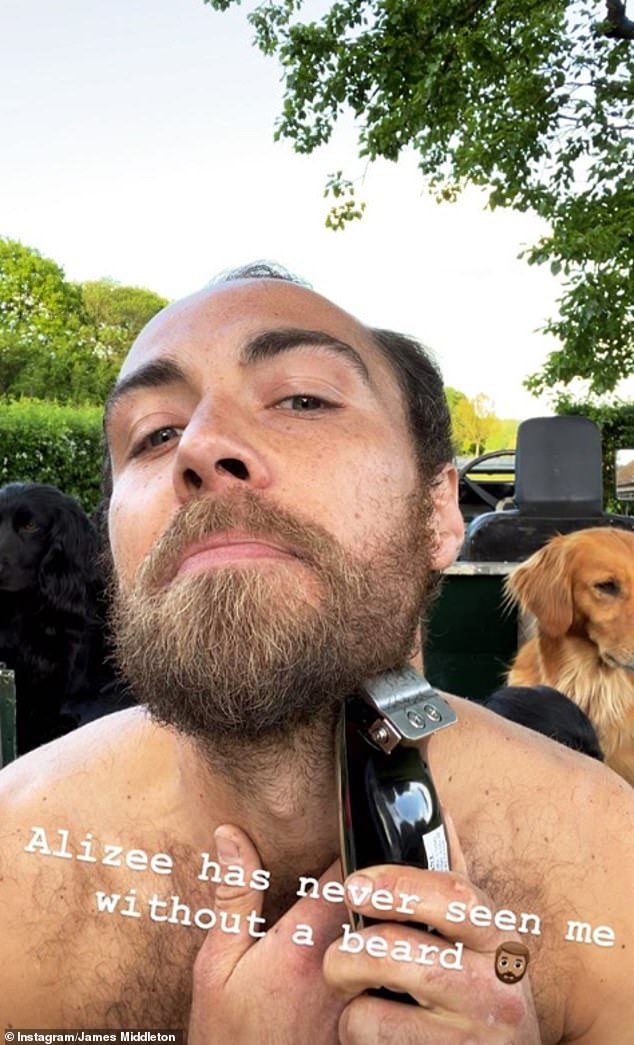 In the short clip, James can be heard explaining that Alizee has never seen him without a beard. Pictured, during the shave

He then gets up and heads towards his parents house in Berkeley, where financial expert Alizee, 29, can be seen sitting alongside his parents Carole, 65, and Michael Middleton, 70.

Within seconds, a shocked Alizee runs over to him and squeals: ‘Ahhh omg! It’s so weird! Even when I kiss you it’s different!’

In June, James shared his first picture alongside Alizee, who he started dating two summers ago.

The pair were pictured holidaying in St Barts with Pippa Middleton, her husband James Matthews, brother-in-law Spencer Matthews, and his wife Vogue Williams at the beginning of the year. 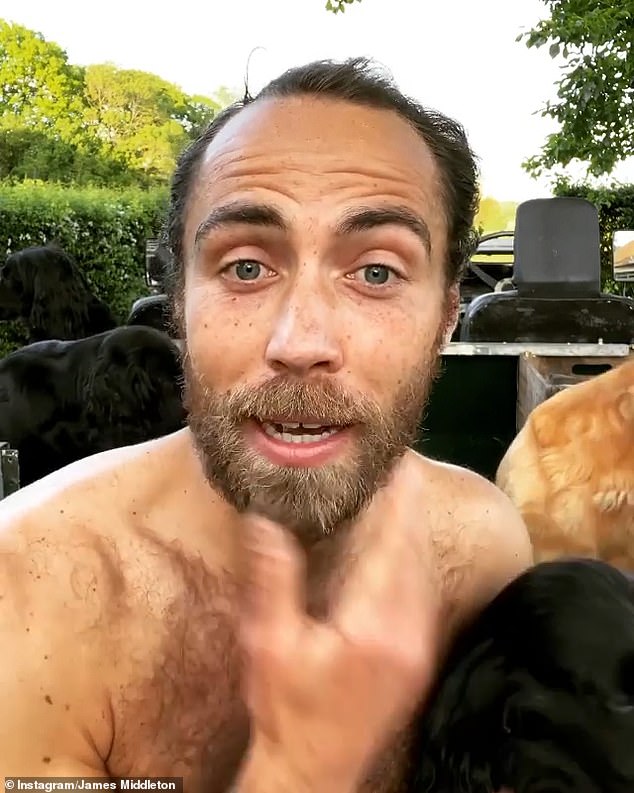 In the video, James explains that the couple were due to get married this month, but that Alizee has never seen him without a beard. Pictured, before 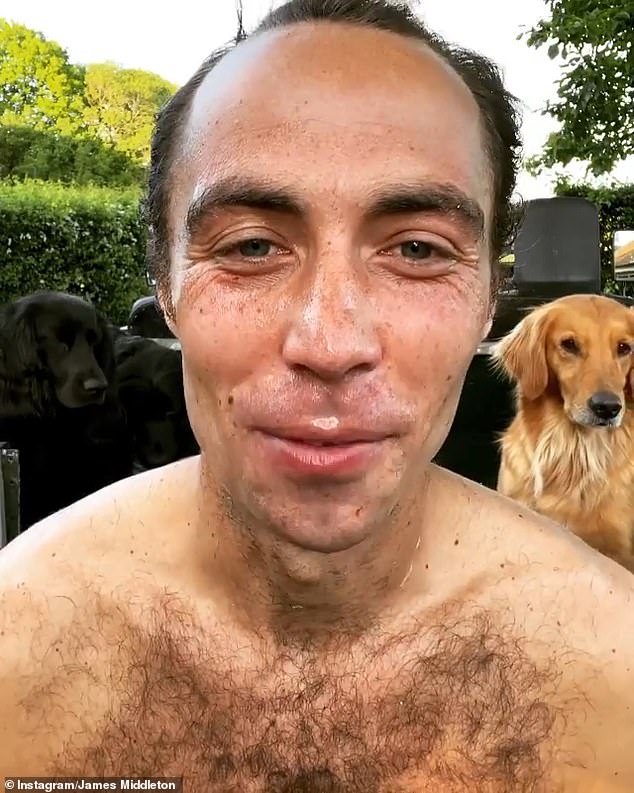 Kate Middleton’s brother jokes that he’s worried his beloved dogs won’t recognised him after his transformation. Pictured, after

Last autumn he proposed to French girlfriend Alizee, 30, privately with a sapphire ring while in the Lake District.

James shared a beaming picture with Alizee snuggled into his arms, revealing a large ring on her left hand.

Announcing the engagement to his 165k followers on Instagram, he posted several heart emojis, alongside the words: ‘She said OUI. Our secret is out but we couldn’t be happier to share the news.’

The ring may have been inspired by sister Kate Middleton’s, after Prince William popped the question with a dazzling oval blue 18-carat sapphire and diamond ring in 2010.