“I fell apart after I released this album. Thank you for celebrating something that once felt like destruction.”

This week, #buyARTPOPoniTunes went viral on Twitter after fans begged Gaga to release a “volume II” to the album. On Tuesday morning, as the album surged to #1 on iTunes, the singer/”A Star Is Born” actress took to Twitter to show her gratitude towards the campaign.

“The petition to #buyARTPOPoniTunes for a volume II has inspired such a tremendous warmth in my heart,” she wrote. “Making this album was like heart surgery, I was desperate, in pain, and poured my heart into electronic music that slammed harder than any drug I could find,” Gaga confessed.

“I fell apart after I released this album,” Gaga admitted. “Thank you for celebrating something that once felt like destruction.”

The 35-year-old star concluded, “We always believed it was ahead of its time. Years later turns out, sometimes, artists know. And so do little monsters. Paws up.”

While the album did debut at #1 when it was first released, it was considered a disappointment by critics and some fans. The experimental album has gone on to become a cult favorite in the years since.

This morning, album producer DJ White Shadow shared his excitement on social media as well — saying he had spoken with Gaga last night and “she shared my incredible joy.”

“We made a plan to get together and discuss your wishes,” he added, referring to a possible Act II. “No promises made, but kindness and love are strong as steel. Now is not the time to let up. Go harder. Forget the past. Think about the future. Apply positive pressure to the universe and let’s make a diamond. I am so in love with you all.” 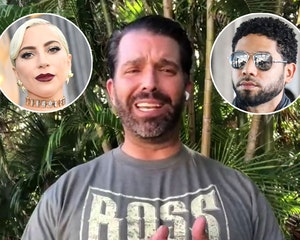 Lady Gaga's Dogs Got So Much Attention Because Jussie Smollett is Running the FBI, Don Jr. Wildly Claims