Liberal MPs are demanding the federal government consider radical plans to bring the runaway housing market under control after new figures showed the value of the nation’s homes soared by a record $450 billion in three months.

Sydney MP John Alexander said some of his own government’s policies were feeding into dysfunctional property market while Melbourne MP Tim Wilson said the tax system has to be overhauled to bring some balance back to house prices. 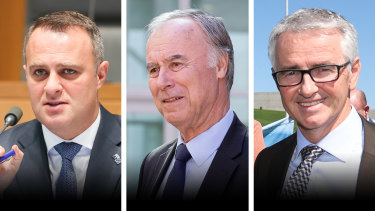 Data from the Australian Bureau of Statistics released on Tuesday showed dwelling prices jumped by 5.4 per cent through the March quarter, the largest quarterly lift since the end of 2009.

All cities reported an increase, led by Sydney (up by 6.1 per cent). Canberra prices jumped by 5.6 per cent, in Perth they were up by 5.2 per cent while in Melbourne they increased by 5.1 per cent.

The total value of the nation’s 10.6 million residential dwellings increased by $450 billion to $8.3 trillion, the single largest quarterly rise on record.

At the same time, special research led by UNSW found the national economy was less stable and suffering from a drop in productivity due to runaway house prices. It found the lift in prices was diverting money away from more productive pursuits and affecting the lending policies of the nation’s major banks.

Mr Alexander said all governments had to work together to put in place policies that would gradually bring house prices down to about three times annual household income. In parts of Sydney, they are currently at 17 times income.

He believes an independent authority should set the proportion of losses an investor could deduct for their investment properties, based on trends in the property market.

Similar to how the Reserve Bank targets an inflation rate of between 2 and 3 per cent, this authority could be able to reduce deductibility to 50 per cent of expenses when investor activity is driving up house prices.

“I think you have to put in place policies that are far sighted, ones that make our biggest asset class as safe as houses,” he said. “The common wealth of this nation is tied to home ownership. But we now have home ownership at its lowest level in 60 years.”

Mr Wilson is also concerned about housing affordability, warning if people can’t afford to buy then more rising rental costs will lead to a higher need for social housing.

“There are too many factors driving money into homes to think if we just tinker with supply, prices will decline – the biggest barrier for young Australians to buy their first home is saving enough for a deposit while renting,” he said. For this reason, Mr Wilson wants first home buyers to be able to tap into their superannuation for a deposit.

He also wants a rebasing of the tax system, with the same rate of tax applied to income also applied to capital growth. Several other Coalition MPs support his push, including Senator Gerard Rennick who wants capital gains tax charged on homes sold for more than $2 million.

“It’s really going to be important to focus on the supply side. While the population growth rate is down [we have] the opportunity to really accelerate the construction of new residential property in Australia because when the borders do reopen we’re going to have more demand”.

University of Michigan Professor of Economics and Public Policy Justin Wolfers, also speaking on the panel, agreed driving demand higher would cause prices to rise.

“That suggests that what we really need to do is every time we have a conversation about housing we talk about supply because it’s the supply side that seems to be really very constrained,” Professor Wolfers said.

A rise in investors jumping back into the housing market was noted by the Reserve Bank of Australia in board meeting minutes for June, released on Tuesday morning.

“Acknowledging house prices had continued to rise in all major markets, the central bank board re-emphasized the need to maintain lending standards and careful monitoring of borrowing trends in an environment with strong housing demand, rising prices and low interest rates.”

Labor’s housing spokesman Jason Clare said the federal government could take some pressure out of the market by backing the efforts of NSW and the ACT to get rid of stamp duty.

“Doing this will cut the cost of buying a home by tens of thousands of dollars and also get rid of one of the big obstacles that stops people moving and downsizing. We also need to build more affordable housing and more social housing.”