Line of Duty creator Jed Mercurio has praised a fan who spotted the link between the murder of fictional reporter Gail Vella and the real life assassination of Maltese anti-corruption journalist Daphne Caruana Galizia.

Mother-of-three Caruana Galizia, 53, whose maiden name was Vella, was killed in a car bomb attack near her home in 2017.

Described as a ‘one-woman WikiLeaks’, she was known for exposing cronyism and sleaze within Malta’s political and business elite and contributed to the 2016 Panama Papers data leak. Her murder sparked international outrage and protests that forced prime minister Joseph Muscat to resign.

One of three men believed to have been involved in her killing, Vincent Muscat, was sentenced to 15 years in prison in February. Last month he revealed the original plan was to shoot the journalist, but that was dropped in favour of a car bomb. 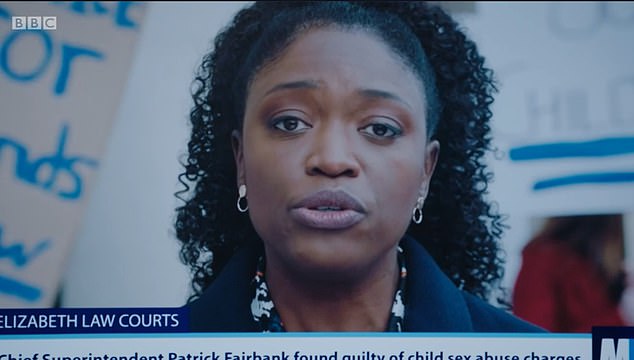 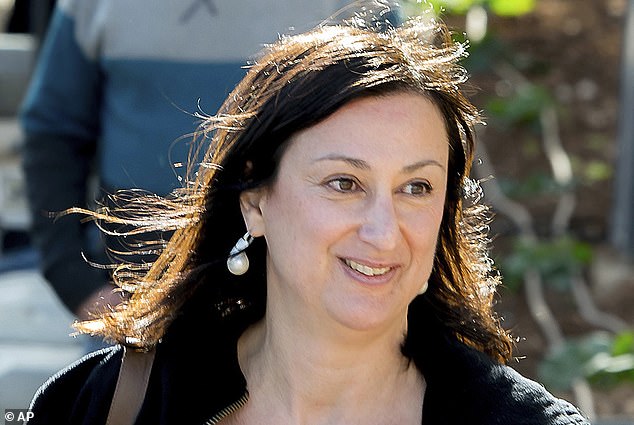 Mother-of-three Caruana Galizia, 53, whose maiden name was Vella, was killed in a car bomb attack near her home in 2017

Twitter user Loredana, from London, asked Mercurio whether series six of the popular crime drama was ‘somewhat inspired’ by the unresolved murder case.

She tweeted: ‘@jed_mercurio been wondering, is #LOD6 somewhat inspired from the unresolved murder case of #DaphneCaruanaGalizia? My first hunch was the use of the Maltese surname #Vella. Also, same car model, similar journalism and similar potential motive!’

In Line of Duty, journalist Vella, played by Andi Osho, worked as a crusading journalist until she was shot dead after arriving home in her Peugeot 108 – the same model as Caruana Galizia’s.

Michael Shaw, an education technology executive based in the Netherlands, posted a further tweet observing that Vella was Caruana Galizia’s maiden name. 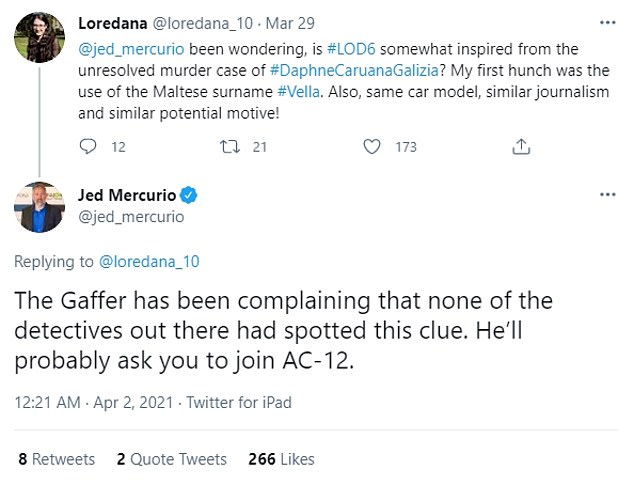 Twitter user Loredana , from London, asked Mercurio whether series six of the popular crime drama was ‘somewhat inspired’ by the unresolved murder case

In response, the show’s writer replied: ‘The Gaffer has been complaining that none of the detectives out there had spotted this clue. He’ll probably ask you to join AC-12.’

Mercurio also exchanged tweets with one of Caruana Galizia’s sons Matthew, who posted: ‘My mum loved British cop shows and I can imagine coming home to find her watching Line of Duty. The lighting in British TV is terrible, I used to tell her. She liked that they always cracked the case.’

The writer replied: ‘Your mother was incredibly courageous in her fight against corruption. I’m so sorry for your tragic loss.’

Mercurio previously professed his admiration for Caruana Galizia’s work during an interview with the Radio Times.

Speaking about the latest series opening with the story of a dead journalist, he said: ‘I was actually thinking of investigative journalism, which deserves a lot of admiration – such as the work of Maltese reporter Daphne Caruana Galizia, who spent much of her career investigating high-level corruption, and was assassinated. 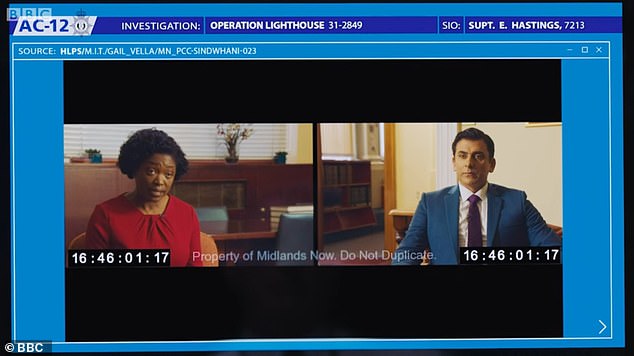 It’s not the first time Mercurio has woven real events into his narrative; in Sunday’s episode, there was a reference to the police search of Cliff Richard’s home during a child sex investigation

‘In a lot of countries led by autocratic leaders, where corruption is rife, journalists’ lives are in danger. In the UK, we have a different phenomenon: large chunks of the press seem to be entirely supine to the corruption in the highest levels of society.’

Two alleged co-conspirators are still awaiting trial over the October 16, 2017 attack, while a businessman, Yorgen Fenech, is also awaiting trial for allegedly masterminding the murder.

In a statement read out by their lawyer, Jason Azzopardi, the victim’s family expressed their ‘hope that this development will begin the road for total justice for Daphne Caruana Galizia’.

The 53-year-old’s murder ‘destroyed her right to life and removed her right to enjoy her family and grandchildren who were born after her murder’, he said. 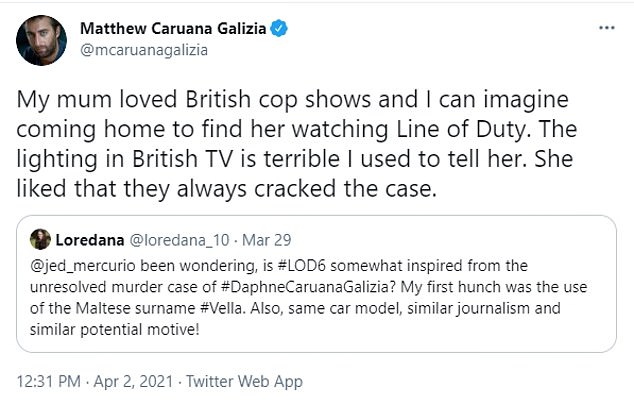 Mercurio also exchanged tweets with one of Caruana Galizia’s sons Matthew, who posted: ‘My mum loved British cop shows and I can imagine coming home to find her watching Line of Duty. The lighting in British TV is terrible, I used to tell her. She liked that they always cracked the case’ 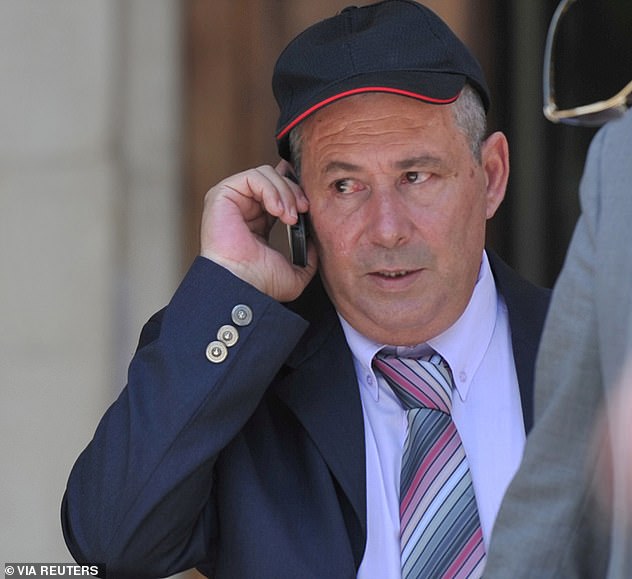 The lawyer added: ‘I say all this because if Daphne’s family were to respond today with all the emotions, it would be obvious as to what their reply would be.’

It’s not the first time Mercurio has woven real events into his narrative; he’s previously named the child abuser Jimmy Savile, and in the latest episode on Sunday, there was a reference to the police search of Cliff Richard’s home during a child sex investigation.

The singer, who was never arrested and subsequently received an apology from police, sued the BBC for breach of privacy after it sent a helicopter to capture footage of the raid.

In episode three of the latest season, a newly emerged recording of Vella interviewing a senior officer sees him walk out when she declares ‘officers arguably colluded with the BBC in enabling a news helicopter to film the search of an elderly pop star’s home’.

On October 16, 2017 Daphne Caruana Galizia is killed in a car bomb targeting her vehicle not far from her home in the north of the island.

Aged 53, she was known for investigating high-level corruption, including contributing to the 2016 Panama Papers data leak.

Her killing triggers an outpouring of grief on the island, one of her sons accusing Muscat of being complicity and turning Malta into a ‘mafia island’.

On December 4, 2017, authorities arrest eight people in connection with the murder.

On July 16, 2019, three suspects are formally charged in connection with the assassination: brothers Alfred and George Degiorgio, as well as Vince Muscat, all in their 50s.

The mastermind has not yet been identified.

On September 20, the government announces a public inquiry into the killing, just ahead of the expiry of a three-month deadline by the Council of Europe to set up such an investigation.

On November 20, Maltese police arrest tycoon Yorgen Fenech in connection with the murder as he is sailing away from Malta on his yacht.

Fenech owns a Dubai company called 17 Black that Caruana Galizia had reported had connections with the government.

The arrest comes a day after the prime minister promises to pardon an alleged middleman if he names the person who ordered the assassination.

On the 23, Fenech demands legal immunity before revealing what he knows about the case. He is released on bail three days later.

On November 26 Muscat’s chief of staff, Keith Schembri, and his tourism minister, Konrad Mizzi, resign. They had been accused by Caruana Galizia of being involved in corruption, which they denied.

Economy minister Chris Cardona says he is ‘suspending himself’.

Schembri is arrested but released two days later without charge, sparking accusations of a cover-up. Some sources claim Schembri was the mastermind of Caruana Galizia’s killing.

On November 30, party sources say Muscat will step down on January 18 once those behind the murder of Caruana Galizia have been charged

‘He always said that he will be leaving soon and he feels that now is the time to go,’ said one party source.

Muscat pleaded guilty of charges including murder, possession of explosives, placing the bomb, and criminal conspiracy.

He was sentenced to 15 years in jail – a relatively lenient sentence after the judge said he had cooperated with police in the case that had rocked the Mediterranean island nation.

Muscat revealed they felt using a car bomb was ‘cleaner’ because killing her with a close-range rifle shot would have been ‘too noisy’.

Muscat claimed the alleged group of assailants hired a car similar to the one Caruana Galizia drove to practice breaking into it. He also used his statement to apologise to members of Ms Galizia’s family, who were sitting in the courtroom.