Yet another sighting of the Loch Ness monster has supposedly been recorded, with a new image doing the rounds. A photograph supposedly taken at the Scottish lake or loch shows what appears to be a large grey hump moving through the water. Subsequent images reveal the ‘monster’ is heading away from the camera.

The images were posted to the Facebook group Anomalous Universe by the group’s founder Steve Carrington.

According to Loch Ness research blog Loch Ness Mystery, Mr Carrington said: “Took this in Loch Ness last September but I don’t know what kind of fish it is”.

While fooling many of the group, the Twitterverse was quick to conduct its own investigation.

As it turned out, the Loch Ness monster in this image was a catfish – and had been photoshopped into the photo. 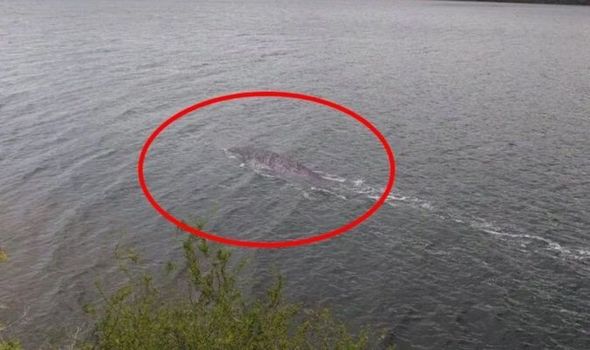 The specific catfish has even been tracked down, which had been captured in the river Po in Italy by anglers Benjamin Gründer, Kai Weber, and Marcus Brock in 2018.

Markings on a catfish’s back are unique, much like a fingerprint, so the people of Twitter troweled through famous images of catfish and discovered the one in the picture, which weighed a staggering 286lb when it was captured.

By analysing the back of the beast which is poking out the water, Twitter account @supahflylol discovered the identical markings on the catfish from the 2018 image.

Supahflylol said of the image: “Can’t believe we gotta say this, but the loch ness monster picture is fake. Compare these unique patterns here.”

In September last year, scientists from New Zealand extracted DNA samples from across Loch Ness, and found no dinosaur-DNA. The mythical monster had been rumoured to be a plesiosaur, a dinosaur which lived up until the end of the dinosaurs’ time on Earth 66 million years ago.

The team also managed to rule out the presence of giant crocodiles, sturgeon, otters and seals.

However, Dr Neil Gemmell, from the University of Otago, said he was “surprised” by the “sheer volume” of eel DNA.

Dr Gemmell said divers saw massive eels in the loch, which he theorises could have been mistaken for a massive monster.

Juvenile eels, known as elvers, make their way to Scottish rivers from the Sargasso Sea near the Bahamas, a gruelling 3,100 mile (5,000km) journey, each year to lay eggs.

Dr Gemmell said that while isolated in the loch, the eels could have grown “even larger”.

“We can’t find any evidence of a creature that’s remotely related to that in our environmental-DNA sequence data.

“So, sorry, I don’t think the plesiosaur idea holds up based on the data that we have obtained.”

END_OF_DOCUMENT_TOKEN_TO_BE_REPLACED

END_OF_DOCUMENT_TOKEN_TO_BE_REPLACED
This website uses cookies to improve your user experience and to provide you with advertisements that are relevant to your interests. By continuing to browse the site you are agreeing to our use of cookies.Ok