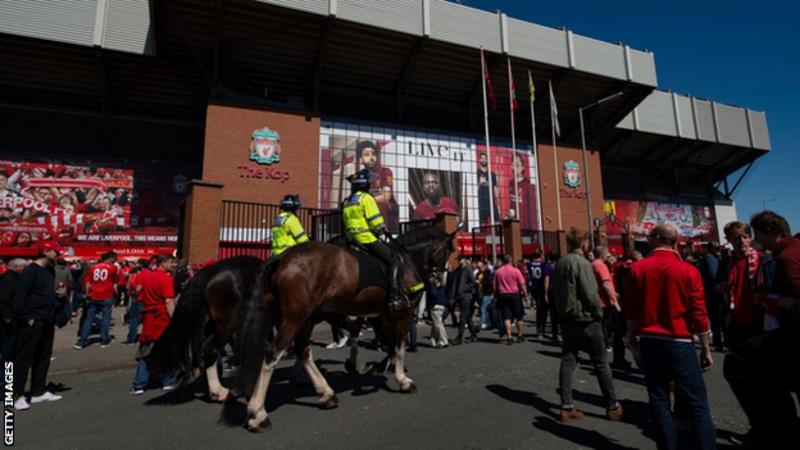 Playing all remaining Premier League and EFL fixtures at their original venues would “present challenges” to the emergency services, says the national lead for football policing.

The Premier League has told its clubs only “approved venues” will be used, raising the possibility of matches being played at neutral grounds.

Further details will be provided to clubs at a meeting on Friday.

There are 92 fixtures in the current campaign left to be played in the Premier League, and 341 remaining across the Championship and Leagues One and Two.

“Playing all those fixtures [in the original venues] would present challenges,” said Roberts. “That’s an awful lot of people moving around the country.

“I think we all need to look at options about what games absolutely need to be played.

“Let’s look at how they can be managed, potentially at their own stadiums, but equally whether we can see benefits of playing at a neutral, controlled venue, both from the health aspects of it but also minimising any disruption to the police, the ambulance service and all those other functions that are going to be stretched as we go back to normality.

“There’s common sense and I think any group of football fans can probably highlight now the fixtures that are probably likely to generate attention.

“One of the things that the Premier League and the Football League are acutely aware of is that clubs would have to get the message out that if matches are taking place they need the continued buy-in of supporters and the public.

“There might be a fair deal that if people start gathering and causing public health or public order issues then that might mean that games can’t actually go on.”

Plans to resume the Premier League season stepped up this week in what has been labelled ‘Project Restart’, with Arsenal, Brighton and West Ham opening their training grounds to players for individual work on Monday.

The league is hopeful of a potential 8 June restart and finishing at the end of July to fit in with Uefa’s European competition plans. This would require full training to begin by 18 May.

The EFL is also expected this week to further develop its contingency plans before the potential resumption.