Home » Lifestyle » McDonald's Eat Out to Help Out menu prices revealed – and you can get a Big Mac for £1.60

McDonald's Eat Out to Help Out menu prices revealed – and you can get a Big Mac for £1.60

MCDONALD’S fans can get a Big Mac for £1.60 from today as part of the new Eat Out to Help Out scheme, which will run until the end of August.

The fast food chain has confirmed each item on its menu will be reduced by 50 per cent. 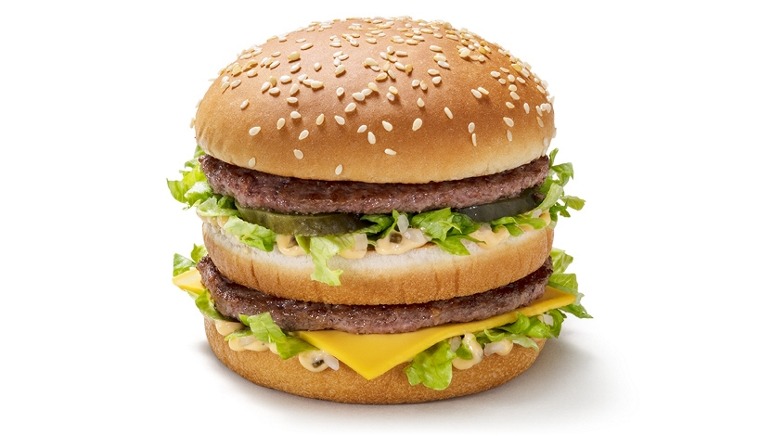 The cheap junk food deals come as Boris Johnson revealed plans to get the nation to lose weight.

The "Better Health" campaign is backed by Matt Hancock, who claimed if every Brit lost 5lbs it could save the NHS £100 million. 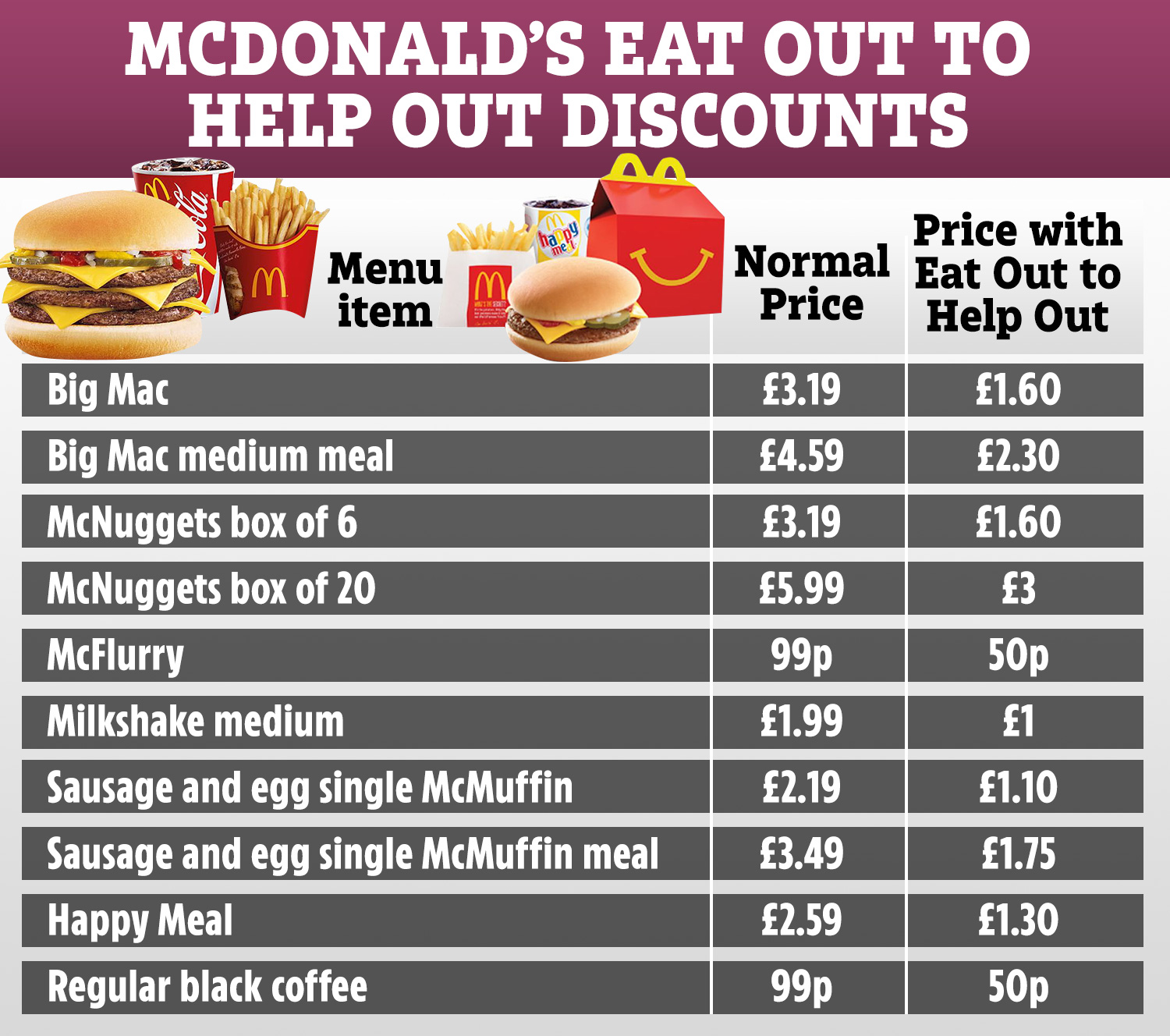 Under the plans, shops will be banned from offering Buy One Get One Free deals on junk food and placing treats near store entrances and tills.

But as of August, the Chancellor's Eat Out to Help Out scheme will make eating fast food even cheaper.

As non-alcoholic drinks are included in the deal, McDonal's customers can get a medium milkshake for £1 instead of £1.99.

McFlurries are also being reduced and will cost 50p rather than 99p.

You can see more examples of reduced McDonald's prices in the box above.

You'll just need to keep in mind these discounts only apply on days where the Eat Out to Help Out deal is on.

Prices will also vary slightly depending on your location – but you'll still get 50 per cent off the original cost upto to a max of £10 per person.

How will the Eat Out to Help Out scheme work?

THE government will cover half of the cost of a meal out, up to £10 a head, including children's meals.

There is no limit to the number of times you can use the discount, so in theory you can get half price meals on every Monday, Tuesday and Wednesday in August.

Businesses will need to register with the scheme on Gov.uk before being able to offer the discount, as well as be Food Standards Agency approved.

Instead of issuing discount vouchers – which the government felt increased the risk of fraud – restaurants, cafes and pubs will be able to claim back the cash.

The refund will then been transferred into restaurants, cafes and pubs' bank accounts within five working days.

Customers will only receive the discount if they eat out at a registered business.

The government has just launched a new postcode checker so you can see all the businesses that will be offering the scheme.

Eat Out to Help Out sees diners get half price meals and non-alcoholic drinks, up to £10 a head, in restaurants, cafes and pubs throughout August.

It launches today and will run until August 31, with the discount applying on Mondays, Tuesdays and Wednesdays.

We've rounded up how much prices will drop by if restaurants use the scheme.

Businesses don’t have to sign up to the scheme, but McDonald’s has confirmed it’ll be participating.

McDonald's has already lowered the price of some menu items after Rishi Sunak announced he was slashing VAT for businesses in the hospitality industry.

The Chancellor has cut VAT from 20 per cent to 5 per cent.

McDonald's hasn't lowered prices on everything, but fan favourites that are included are Happy Meals and Big Macs – see more examples here.

Businesses don't have to pass on any saving to customers.

McDonald's has just reopened 700 restaurants for eat-in diners with food being served by table service only.

The fast food chain has also reopened the majority of its restaurants for either takeaway, drive-thru or home delivery.

Not every branch will offer each of these options, so make sure you use the McDonald's restaurant finder tool to see what your local has available.

McDonald's shut all of its 1,350 restaurants across the UK in March amid the coronavirus lockdown.

The restaurant chain is still running a reduced menu, although it started serving breakfast again in more than 1,000 sites.

McDonald's has confirmed it now asks customers to wear masks if they're just collecting food and not sitting in.

END_OF_DOCUMENT_TOKEN_TO_BE_REPLACED

Family photo! Chelsea Houska posted a sweet shot taken moments after her and Cole DeBoer‘s daughter Walker June was born. Teen Mom 2 Tots: My, How They’ve Grown! “What a life we have built @coledeboer,” the Teen Mom 2 alum, 29, captioned a Wednesday, January 27, Instagram picture. The former reality star smiled with her infant held to her chest in […]

END_OF_DOCUMENT_TOKEN_TO_BE_REPLACED
This website uses cookies to improve your user experience and to provide you with advertisements that are relevant to your interests. By continuing to browse the site you are agreeing to our use of cookies.Ok