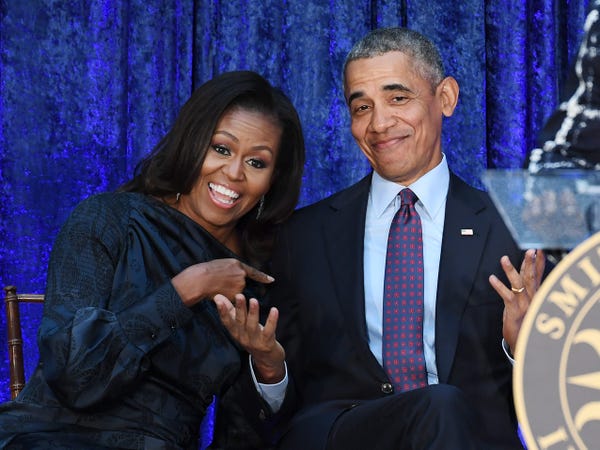 In the eyes of many, Michelle and Barack Obama are relationship goals.

The former president and first lady of the US will next month be celebrating their 28th wedding anniversary, and Michelle recently shared some advice for making a relationship last.

Speaking with Conan O'Brien on "The Michelle Obama Podcast," the host said it's important not to rush the process of getting to know someone.

'You can't Tinder your way into a long-term relationship'

"People aren't perfect, marriage is hard, it's a struggle for everyone," she said.

"There's no magic way to make that happen except the basics of finding somebody, being honest about wanting to be with them, to date them seriously, to plan on making a commitment to date them, seeing where it goes, and then making it happen.

"You can't Tinder your way into a long-term relationship."

Pick your partner like you'd pick a basketball team

Obama and O'Brien agreed that it's more common for men to take more time to feel ready for a serious relationship than women, but she thinks women should think about doing the same.

"A man's inclination to wait and to go out there and search and get himself ready, I think is a good instinct that more young women should think about," Obama said.

"If we approached a marriage and family like we, particularly men, would approach picking your basketball team, we'd have better marriages."

It’s been another heavy stretch for so many of us. And this week’s episode of The #MichelleObamaPodcast is a conversation I had a little while back with my friend Conan O’Brien. It’s about marriage—a source of strength and perspective through times like these for so many of us. We reflect on our own marriages and experiences as parents––and talk about the importance of honesty, authenticity, and being your true self with your partner. And because it’s Conan, this one’s a lot of fun. I think we all can use that right now. Listen in at the link in my bio.

Obama said that when picking a winning team, you want everyone to be strong.

"If you're on a team, you've got to be able to do everything — especially in basketball, you would never pick somebody that says, 'I only dribble. I don't shoot, I don't defend, I just dribble.'

"If we look at marriage as a real team, then you want LeBron."

Don't give up when times are tough

"There were times that I wanted to push Barack out of the window," Obama said.

"And I say that because it's like, you've got to know the feelings will be intense. But that doesn't mean you quit. And these periods can last a long time. They can last years."

Last week on The #MichelleObamaPodcast, Conan and I reflected on our marriages. This relationship can be one of the most foundational pieces of our identities—bringing us so much joy, meaning, and support every single day. But one thing is for sure: It also takes a lot of work; a lot of honesty with ourselves and our partners. That’s one thing I’ve learned. I’d love to hear some of the things you’ve learned about marriage and about yourself. Let me know in the comments. ❤

It doesn't mean your relationship is "broken" and you should give up when you face challenges, Obama advised young couples.

"I just want to say, look, if that breaks a marriage, then Barack and I have been broken off and on, throughout our marriage, but we have a very strong marriage," she said.

"And if I had given up on it, if I had walked away from it, in those tough times, then I would've missed all the beauty that was there as well."