Home » Lifestyle » Mike Tindall does the 2.6 Challenge in place of the London Marathon

Mike Tindall does the 2.6 Challenge in place of the London Marathon

Mike Tindall leads people doing the 2.6 Challenge in place of London Marathon as one owner challenges her dog to catch a ball 26 times and a woman even has WATER thrown in her face repeatedly

Today should have marked the 40th edition of the London marathon, but the great sports event was cancelled due to the coronavirus pandemic.

Mike Tindall, 41, ran an eye-watering 72,73 kilometres during a 2h36 hour run this morning, and encouraged followers to donate ‘generously’ to three charities of his choice as he is currently on lockdown with his royal wife Zara, 38, in Gloucestershire.

Meanwhile, in Whiltshire, Ros Oswald enlisted the help of puppy Molly, who caught 26 balls for the Whiltshire Wildlife Trust as neighbours watched.

In London, the CEO of the Get Kids Going charity, which provide opportunities for disabled youngsters to take part in sports, volunteered to have 26 buckets of water thrown in her face for the good cause.

The annual 26-mile run was postponed until October due to the coronavirus crisis, but that did not stop runners heading out this morning, nor families from taking part in the challenge from home. 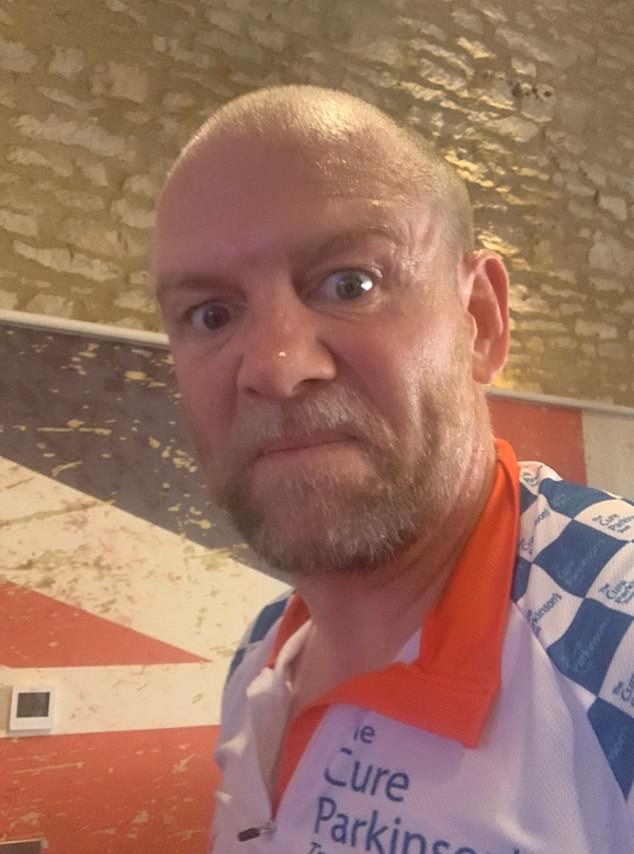 Mike Tindall, 41, ran an eye-watering 72,73 kilometres during a 2h36 hour run this morning, and encouraged followers to donate ‘generously’ to three charities of his choice as he is currently on lockdown with his wife Zara, 38, in Gloucestershire (pictured halfway through his run) 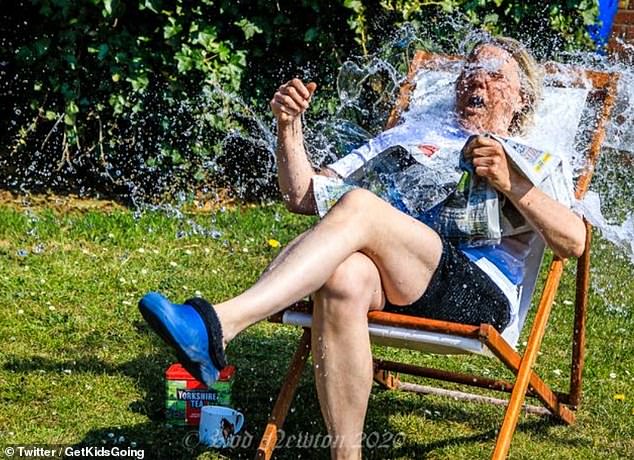 The CEO of Kids Get Going, a children’s sports charity based in London, agreed to have 26 buckets of water thrown in her face (pictured)

Mike Tindall had announced he would be taking part in the challenge on Friday and called for people to donate to smaller charities.

Starting at 7:53am today, he ran a total distance of 72.73km for 2h36 straight in order to raise funds for three charities dear to his heart: Cure Parkinson’s, Rugby For Heroes and the Matt Hampson Foundation.

The 2.6 challenge saw thousands complete sports activities of their choice in order to raise money for charities around the country. 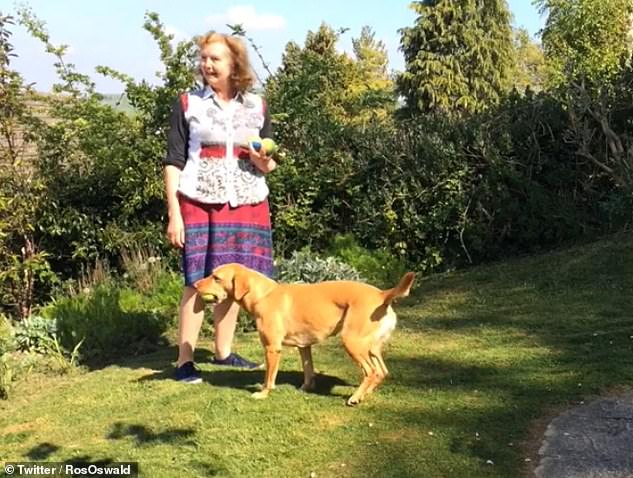 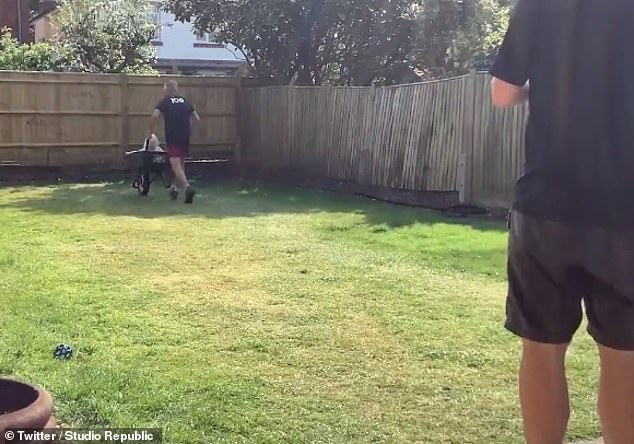 The commercial director of Studio Republic, the agency behind the 2.6 Challenge, pushed his daughter in a wheelbarrow in his garden for 26 laps (pictured)

Ros Oswald, a music teacher from Aldbourne, took a more creative approach and enlisted the help of her dog Molly to raise funds.

Crowdfunding for the Whiltshire Wildlife Trust, Ros and Molly aimed to have their dog catch 26 balls, as their neighbours acted as judges from a safe distance.

Excited Molly managed to catch 22 of the 26, a solid effort for the cute dog, who managed to fundraise £420.

In London, the CEO of the Get Kids Going took one for the team when she agreed to have 26 buckets of water thrown in her face in her quirky version of the challenge and raised £78. 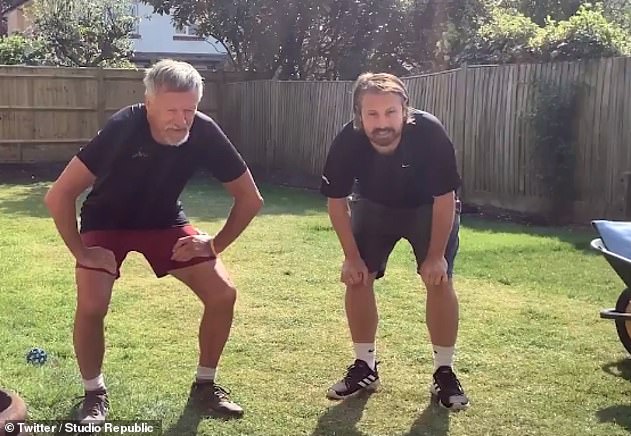 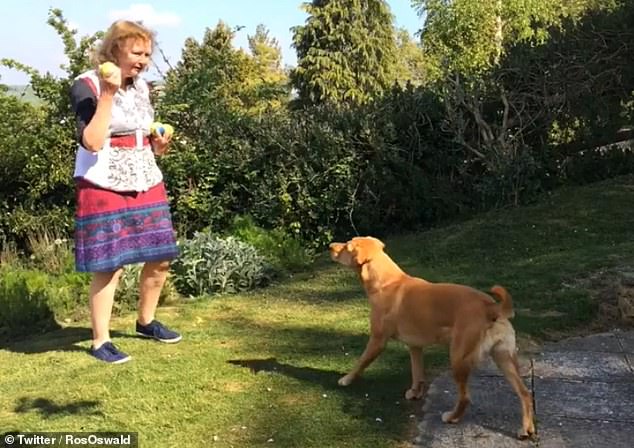 Molly managed to catch 22 of the 26 balls Ros threw her (pictured). A solid effort for the excited pup

A picture showed the poor woman completed soaked as a large bucket of water landed on the chair she had been reading in.

Meanwhile, BBC breakfast’s Louise Minchin completed the challenge by running up and down her stairs 26 times.

Another inventive Briton was filmed doing 26 back flips on their trampoline to raise money for the Parkinsons UK charity, which supports people living with the debilitating condition.

Some parents around the country got their children involved in the great fundraising effort.

Studio Republic, the agency behind the 2.6 Challenge,  of course also took part. 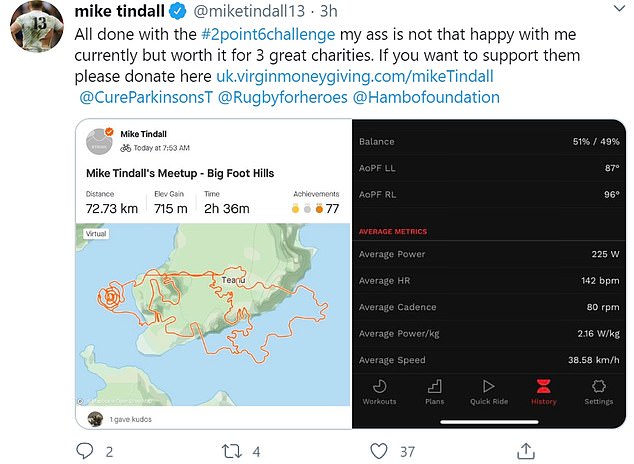 In Gloucestershire, Mike Tindall raised £2,300 for three charities during his 2h36 run this morning (pictured)

The agency’s commercial director, Jack, and his father, ran 2.6 miles in their back garden carrying his daughter in a wheelbarrow to the sound of the Benny Hill unmistakable soundtrack.

The initiative is an attempt to replace the millions of pounds-worth of donations which charities would have received from events such as the London Marathon which have been postponed or cancelled.

Nearly £4million has been raised so far, with celebrities including presenter Jake Humphreys – who is raising money for children and young people’s cancer charity CLIC Sargent -, Stephen Fry and cyclist Chris Froome all pledging to take part.

Lonely joggers took to the streets in Britain’s capital city this morning on the day of what would have been the London Marathon, while other would-be entrants have taken up other challenges to raise money for charity.

The annual 26-mile run was postponed until October due to the coronavirus crisis but that did not stop runners heading out this morning.

They were pictured in colourful tracksuits as they jogged across Tower Bridge and down the Mall, both of which are ordinarily part of the iconic marathon’s route.

Whilst some were in pairs, many kept up social distancing guidelines by jogging alone and keeping their minds occupied with music played through headphones.