Mother, 27, is set to marry her former boss, 72, after she proposed to him in on the stage of a crowded strip club where she paid for him to have a lap dance

A mother proposed to her former boss at a strip club despite him being 45 years her senior said they have a ‘phenomenal sex life’ and she cannot wait to marry him.

Photographer Rachael Chenault, 27, from Belle Vernon, Pennsylvania, was at the club with her now fiancé John Penzera, 72, in May 2018.

The couple were with a bunch of friends at the nightspot where Rachael ordered John an exotic dance before joining the performers on stage to ask him to marry her.

Rachael, who met Vietnam war veteran John three years ago when he employed her as a guard at the security firm he runs, said: ‘It’s quite a vulgar story. 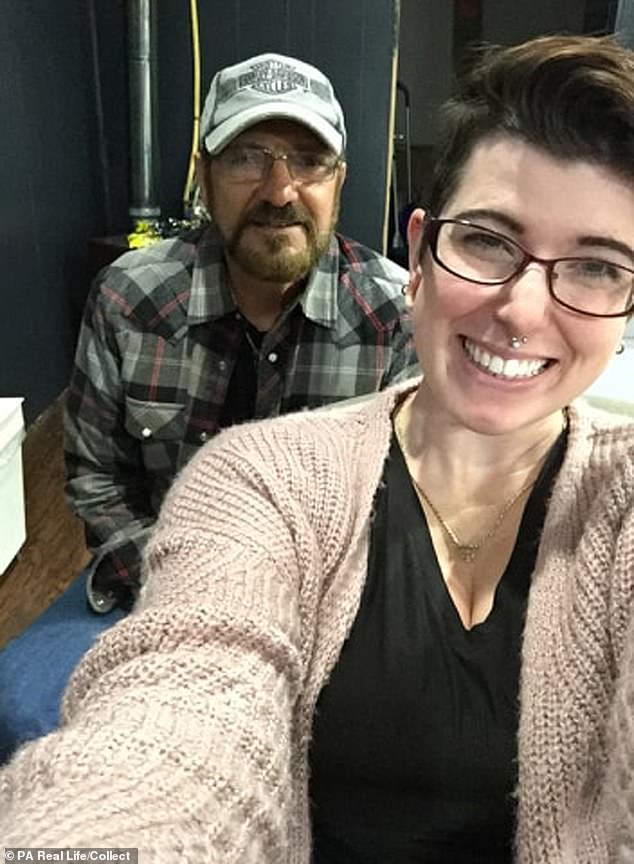 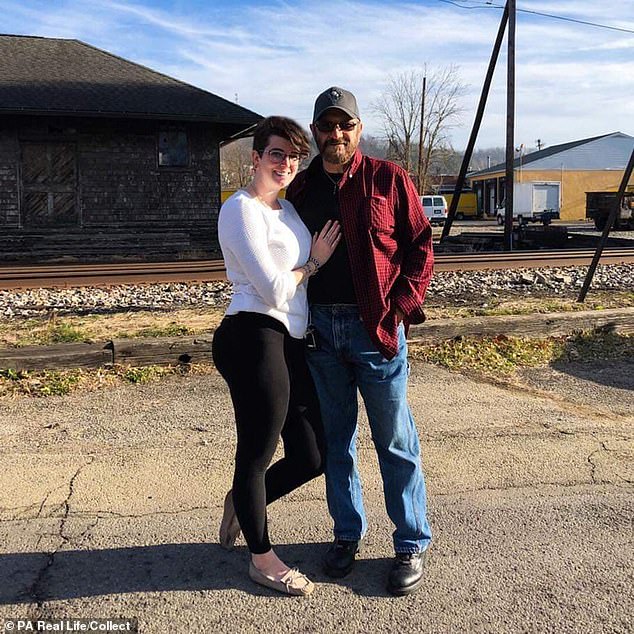 Photographer Rachael Chenault, 27, from Belle Vernon, Pennsylvania, has been engaged to John Penzera, 72, since May 2018

‘It was not a traditional proposal by any stretch of the imagination. We were with a bunch of friends at a strip club and I had ordered a ring online, which I had with me.

‘I’m terrible at keeping secrets and was worried about ruining the surprise, so it was a bit spontaneous.

‘I arranged for him to have an exotic dance with three beautiful dancers. He was sitting on the stage in front of a room full of people when, fully clothed, I joined the three naked dancers and proposed to him there and then.

‘I told him to get this out of his system because he would never have a naked woman dance for him again except me!

‘It’s definitely not the traditional way to do it. He had no choice and said yes straight away!’ 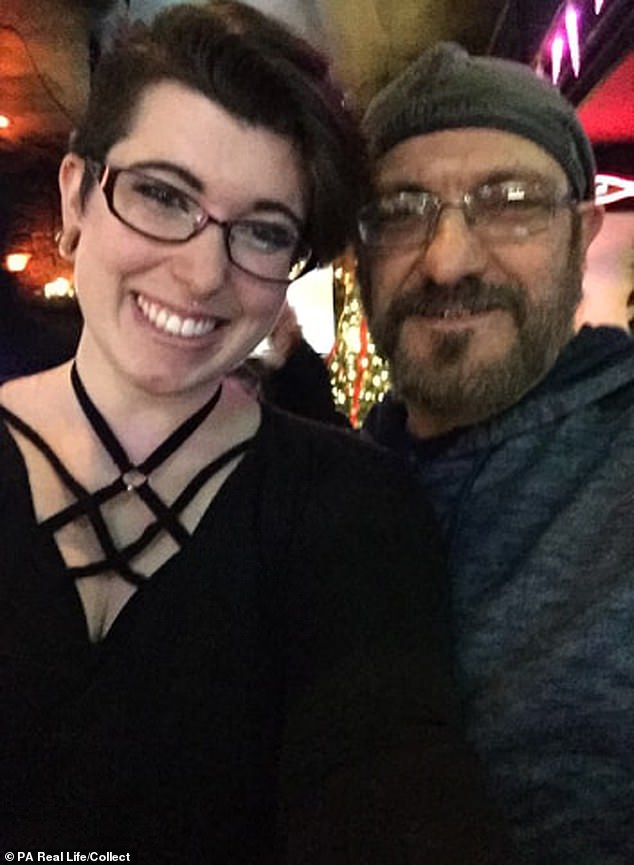 Rachael, who has a son, Levi, five, from a previous relationship, said: ‘To us, age is just a number. He’s my soulmate and the love of my life.

‘I have no intention of being with anyone else even after he has gone. I know nobody could compare to him. It does put a dread on things if you think too far ahead, but I try not to. I have him now and I’m thankful for him.

‘We have an incredibly close relationship. It’s scarily close, we can both read even a slight change in mood in the other.’

Rachael expressed how the couple are unable to keep their hands off each other and ‘rarely make it to the bedroom’.

‘And we have a phenomenal sex life, too. Age has nothing to do with that, we are spontaneous and can’t keep our hands off each other,’ she said. 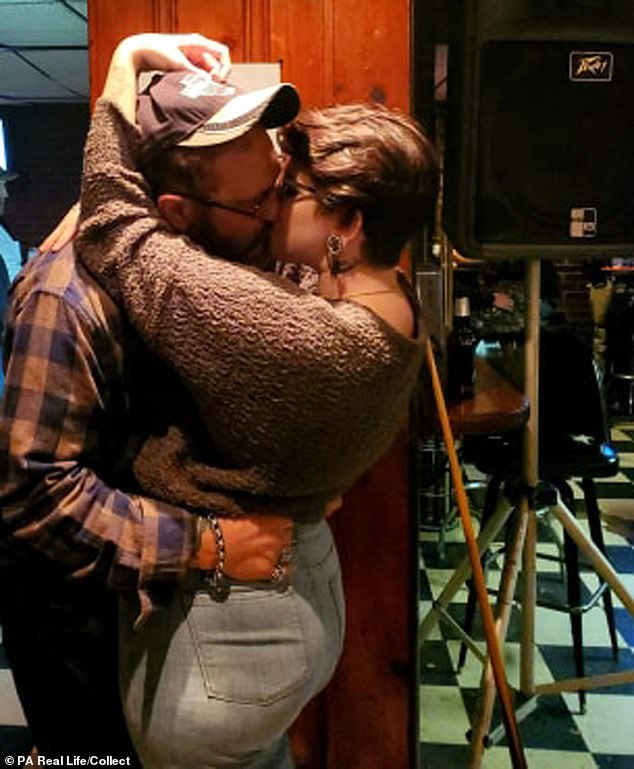 ‘We rarely make it to the bedroom. Sometimes it will just happen outside, in the parking lots or in woods.’

John interviewed Rachael for the security role in December 2017 where she said the chemistry was immediate. However she feared that romantic feelings might endanger her position.

‘I was like, ‘I want him’. It was his mannerisms, the way he carried himself. It was an instant attraction for the both of us,’ she recalled. 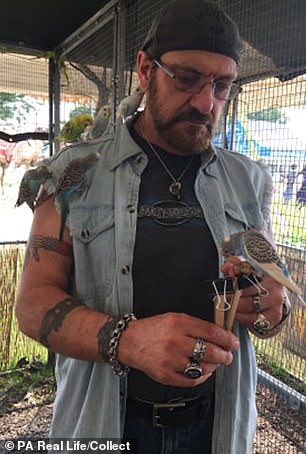 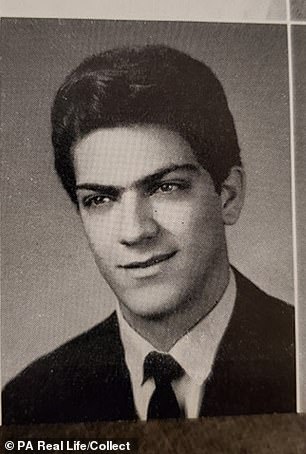 John, 72, she he was attracted by Rachael’s demeanour (left). John worked in the US army and as a prison officer before running his security firm

‘I think we both knew how we felt straight away, but he was going through a divorce at the time, so I didn’t want to rush things, or be the one to make the first move.

‘My son’s father is 58 years old, so age gaps have never been a problem for me, but I definitely had no clue that John was as old as he is.

‘I thought he was in his late forties or early fifties, because he does not look or act his age.’ 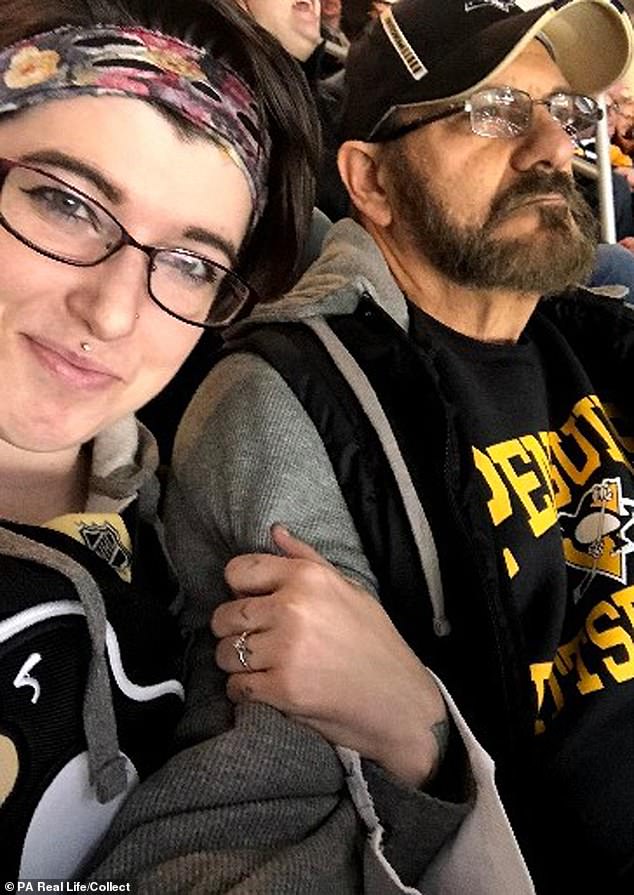 John said: ‘I wasn’t looking for love, but she came into my life and it’s just got better and better. I can’t wait to marry her’

And John was clearly unfazed by the fact his admirer was younger than his own son.

‘He made the first move and kissed me,’ said Rachael. ‘It was a month after I was hired.

‘He had been teaching me how to input a code into a digital box and as I went to walk out he grabbed me and pulled me in for a kiss. It felt like fireworks.

‘It was amazing and I wanted him so much, but because of what he was going through at the time, I didn’t think it would happen.

She continued: ‘It was like my dreams had come true.

‘It was like that movie moment when the guy grabs the girl and leans her over for a kiss. 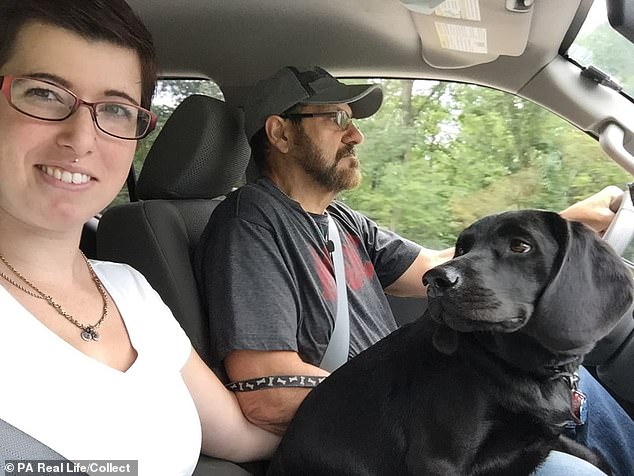 ‘But I did then freak out because I was worried about getting fired.’

Overcoming her fears, a week later the pair went on their first date to a bar, where they realised how much they had in common.

‘We have the same taste in music. We both like classic rock. He was into motorcycles and I absolutely love them. And we both have the same fashion style,’ Rachael said.

‘We just kept talking and haven’t stopped since.’

A month later, the pair officially became boyfriend and girlfriend, but kept the relationship quiet for two years until John’s divorce was finalised.

Then they broke the news to John’s 28-year-old son and 23-year-old daughter, who were simply pleased to see their father happy. 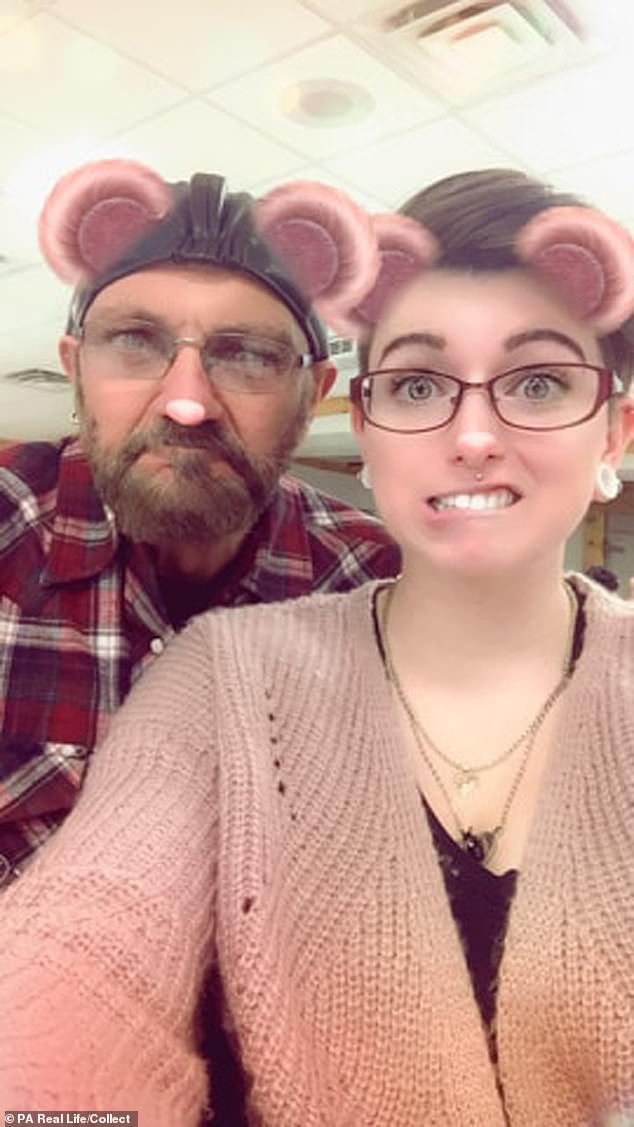 ‘It was never an issue, I did not think it was weird at all. When I do see his children, we get along well,’ Rachael added.

Being attracted to older men is nothing new for Rachael, who dated a man of 34 when she was just 17, while she started seeing Levi’s dad when she was in her early 20s.

She said: ‘Older men are more mature. Men at the age of 27 are still boys and I’ve never found them appealing.

‘They just don’t have it together. I’ve always been an old soul. I have myself together and know what I want from life, so I find it easier to connect to older guys.

‘It drives me crazy when people say, ‘Do you have daddy issues?’ No I don’t, nor have I ever and I certainly wouldn’t look at my fiancé as a father figure for myself.

She continued: ‘At first, my family were not happy about me dating older men, but when I was 18, I told them I wasn’t going to date guys my own age as there was no attraction, so they accepted it.

‘When they met John, they were surprised because he doesn’t look his age. They were worried because he was much older than any other guy I’d dated, but once they got to know him, they really liked him and now we do things together as a family.’

And, a week after the strip club proposal, John, who had already bought a ring with the same intention, got down on one knee at Rachael’s favourite childhood haunt, Roundhill Park in Elizabeth, Pennsylvania, and asked for her hand.

‘It was a ring I’d been looking at online and I’d showed him how pretty it was, even before we were dating and he had remembered,’ Rachael said.

‘It was a complete surprise and was the best thing. 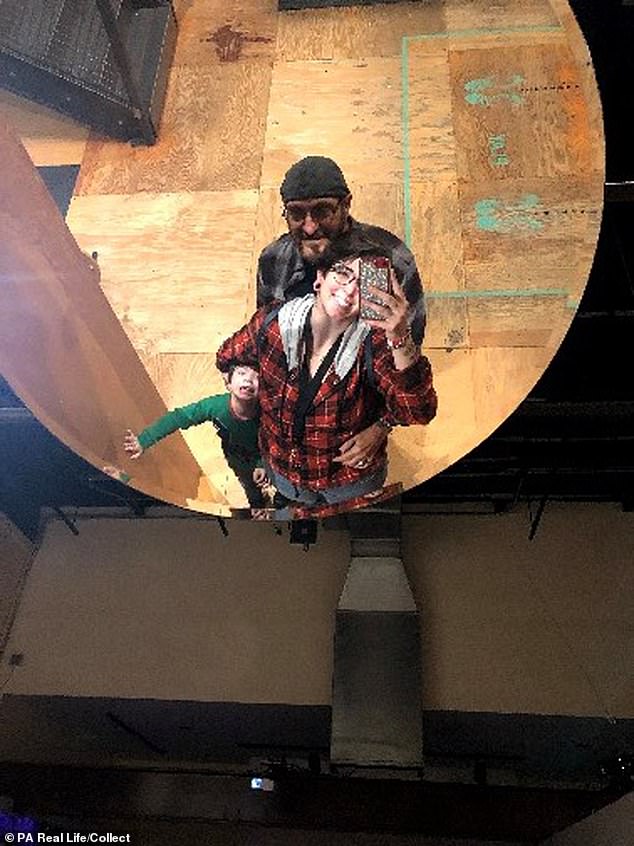 She added: ‘We want to get married at Roundhill Park, too, hopefully on top of the hill.

‘We’re not sure when it will happen now though, because of Covid-19, so we’re enjoying the engagement.’

Rachael is currently living in an apartment with her son, while John does up a home in Latrobe, Pennsylvania, for them to move into as a family.

‘My son is close to John and really looks up to him,’ she said. ‘Levi has Attention Deficit Disorder (ADHD) and is mildly autistic, and John is great with him, really patient. He’s a really good role model.’

Although the couple have been accepted by friends and family, they do get the odd comment from strangers, who assume Rachael is out with her father and that John is her son’s grandfather.

‘We don’t even listen to it, we just shrug it off,’ Rachael said. ‘Anyway, more often than not people tell us how good we look together.’

And the age gap has certainly not hindered things in the bedroom either.

Rachael laughed: ‘I think he was quite old fashioned until he met me but I’ve taught him a lot.

‘We do have our differences. He is stuck in his ways and I know he’s not going to change now.

‘We do have disagreements about some things – mostly old movies! He will be explaining them to me and I won’t know what he’s talking about.’

Rachael’s only fear about their age gap is that she will lose John too soon.

She said: ‘I know he’s not going to live forever, which is something I worry about every day.

‘But all that aside, it’s so nice to be with someone older because they have their head together. He’s mature and has opened my eyes to new experiences.

‘It’s never got boring with us. He is considerate and tells me every day that he loves me.’

Meanwhile, John, who previously worked as a prison officer, before running his security firm, is devoted to Rachael.

He said: ‘I was attracted by her demeanour, the way she carried herself. She was a fast learner and so easy to talk to.

‘I was a bit concerned because of the age difference, but it didn’t bother her at all. We don’t look at it as being a major difference. We continue like any other couple.

‘People tell us we make a good-looking couple. I look 20 to 30 years younger, so people rarely question it.’

He continued: ‘My kids had no concerns about it, either.

‘Rachael’s my life, she’s beautiful, intelligent, sexy and I love her. She’s so smart and really helps me out, and I hope I do the same for her.

‘I wasn’t looking for love, but she came into my life and it’s just got better and better. I can’t wait to marry her.’