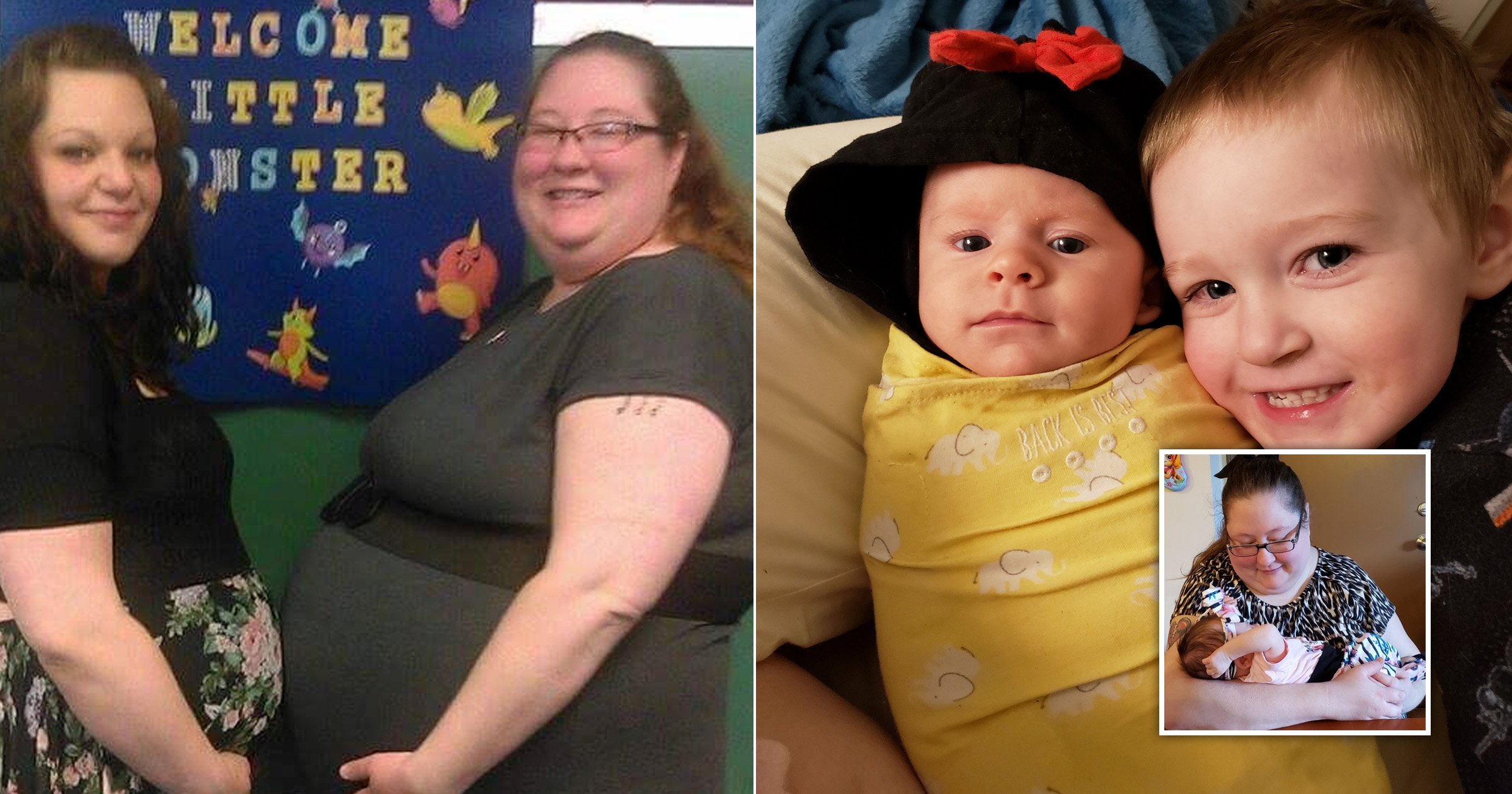 Danielle Blair was heartbroken was she learnt that her best friend, Alicia Ward, was struggling to concieve.

Alicia, 34, was already a mum-of-one to Declan, six, but longed to have more children with husband, Austin, 33.

So in a remarkable show of friendship, Danielle offered to help.

Not only did the 28-year-old volunteer to be a surrogate for the pair, she also offered to donate her eggs.

Danielle fell pregnancy in January 2019 via intrauterine insemination, and gave birth to Maisie, now 2, in October 2019.

Alicia says: ‘Danielle was already my best friend, but her doing this incredibly selfless act for us has brought us so much closer together.’

Danielle and Alicia met on Facebook when they were both pregnant with their first children and have been inseparable ever since – despite living two hours away from each other.

Alicia, who works at a day-care centre, in Ohio, US, said: ‘I was shocked she was willing to do such an amazing thing for us.

‘I was worried about bonding with Maisie and worried that she would miss Danielle.

‘But when I first held her that all washed away. This was my child and I felt the connection instantly.

‘Now she’s a mummy’s girl, she definitely prefers me over her dad.

After having a difficult first birth with her son, Declan, now six, Alicia and Austin debated whether they should have another child.

Alicia also suffers from polycystic ovary syndrome – a condition that affects how the ovaries work.

They decided to try for a second child, but struggled to conceive again.

Alicia said: ‘Danielle phoned me and said: “Let me have your baby for you.”

‘At first I laughed, I didn’t really think she was serious.

‘But a few weeks later she called me again and said: ‘I’m serious about this. If you want to let’s do it.’

Alicia said she was nervous about the surrogacy and that she had concerns her daughter would only be a half-sibling to her son, so she may not look like him.

When Danielle found out she was pregnant she called Alicia with the good news.

‘I just couldn’t believe it.’

For the following nine months, Alicia went with Danielle to all the appointments she could and was kept updated with regular messages and photos.

Alicia found out her baby was going to be a girl after Danielle did a home gender reveal test and surprised her with the news.

‘She came to visit and handed me this egg that she had wrapped up and inside was a note asking my son to get a bag from the hall,’ Alicia said.

‘He opened the bag and inside was a little pink outfit.

‘I was so excited, I was going to have a little girl.’

On the day of the birth, Alicia got a call from Danielle to tell her she was having contractions and Alicia immediately rushed to UPMC Women’s Hospital, Pennsylvania, US, with Austin.

The doctors had to induce Danielle and break her waters – little Maisie was born an hour later.

‘I was holding Danielle’s leg and all of a sudden I could see the baby’s head,’ Alicia said.

‘Then in one push she came right out.’

Alicia was able to hold Maisie for the first time just after she was born.

‘It was magical, it felt no different to when I held my son for the first time,’ she said.

They stayed in hospital two days before they were able to take Maisie home, where she settled in straight away.

‘I will tell her from an early age how she was made and I want it to be normal – not a surprise.

‘She is no different, just because she doesn’t have my DNA.

‘Danielle is always going to be in her life and I am so thankful that she could give us the second child we always wanted. I never thought it would be possible.

‘It was definitely a rollercoaster of emotions but once they are in your arms it’s all worth it.’

Danielle said: ‘There was never a doubt in my mind that this was something I wanted to do for her.

‘Seeing her reaction to the positive test and seeing Maisie for the first time on the ultrasound was so indescribable.’

Austin said: ‘It never felt any different to me than our son. She was ours from the start.

‘It was a little awkward watching our friend give birth, but I wouldn’t change it for anything.’