Ingenuity, a small robotic helicopter currently attached to NASA’s Perseverance rover, will attempt the first powered flight on another planet in just over a week.

The 4-pound (1.8-kilogram) rotorcraft is attached to the belly of Perseverance, which touched down on Mars on February 18.

Ingenuity is now ‘uncocooned’ from its carbon-fibre shield that acted as a protective casing during landing, and is set for deployment from April 8, NASA says.

Before it can track the first flight of an aircraft on the Red Planet, Perseverance needs to ‘drop off’ Ingenuity in a clear, safe area that will become the first Martian helipad.

Ingenuity carries a small amount of fabric that covered one of the wings of the Wright brothers’ aircraft, known as the Flyer, during the first powered, controlled flight on Earth in 1903. 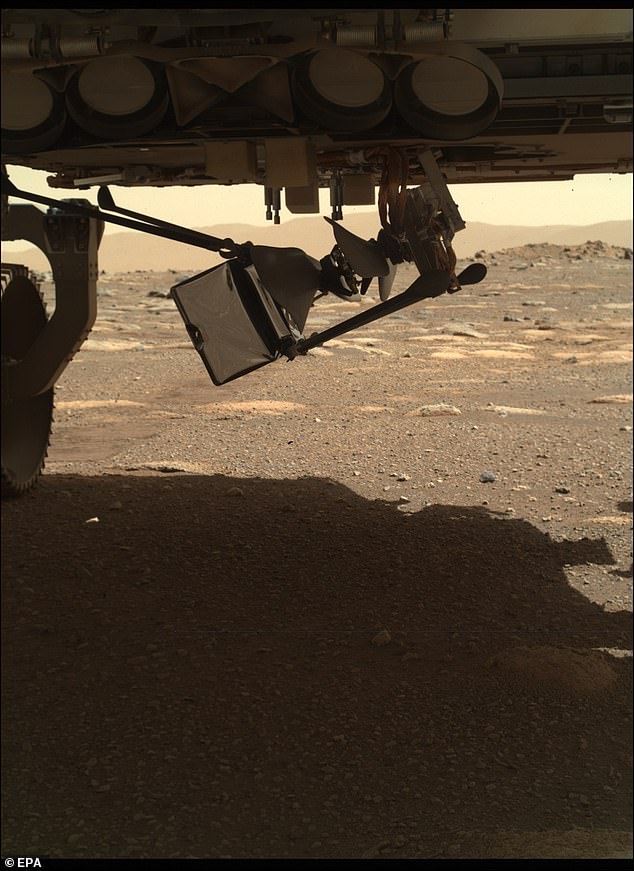 A handout photo made available by NASA shows an image of NASA’s Ingenuity Helicopter attached to NASA’s Perseverance Mars rover. This image was acquired using the SHERLOC WATSON camera, located on the turret at the end of the rover’s robotic arm, on Sol 37, the twentieth Martian day of the mission, March 28, 2021. Having landed on Mars on February 18, Perseverance’s main mission on Mars is astrobiology and the search for signs of ancient microbial life

NASA is set to fly where no one has flown before – Mars’ atmosphere.

Named Ingenuity, the craft will fly at an altitude that is similar to 100,000 feet on Earth, allowing it to gather geology data in areas the rover can’t reach.

NASA is comparing this mission ‘to the Wright brothers moment,’ as it will be the first time in history an aerial vehicle has flown on another world.

It will first spend up to 60 days charging strapped to the Perseverance rover, before being released.

If it survives the hard -90C Martian night, NASA will make the first flight attempt within 30 days.

Orville and Wright covered 120 feet in 12 seconds during the first flight.

The Wright brothers made four flights that day, each longer than the previous.

A small amount of the material that covered one of the wings of the Wright brothers’ aircraft, known as the Flyer, during the first flight is now aboard Ingenuity.

‘Since the Wright brothers first took to the skies of Kill Devil Hills, North Carolina, December 17, 1903, first flights have been important milestones in the life of any vehicle designed for air travel,’ NASA said in a statement

‘Aptly named, Ingenuity is a technology demonstration that aims to be the first powered flight on another world,’ said Lori Glaze, director of the Planetary Science Division at NASA Headquarters.

‘If successful, [it] could further expand our horizons and broaden the scope of what is possible with Mars exploration.’

Before Ingenuity takes its first flight on Mars, it must be squarely in the middle of its ‘airfield’ – a 33-by-33-foot patch of flat Martian land, which it’s currently making its way towards.

Once the helicopter and rover teams confirm that Perseverance is situated exactly where they want it to be inside the airfield, the process to deploy the helicopter on the Martian surface begins.

‘As with everything with the helicopter, this type of deployment has never been done before,’ said Farah Alibay, Mars Helicopter integration lead for the Perseverance rover.

‘Once we start the deployment there is no turning back – all activities are closely coordinated, irreversible, and dependent on each other.

‘If there is even a hint that something isn’t going as expected, we may decide to hold off for a sol [a Martian day] or more until we have a better idea what is going on.’

The helicopter deployment process will take about six sols – which equates to six days, four hours on Earth.

On the first sol, the team on Earth will activate a bolt-breaking device, releasing a locking mechanism that helped hold the helicopter firmly against the rover’s belly during launch and Mars landing.

The following sol, they will fire a cable-cutting pyrotechnic device, enabling the mechanized arm that holds Ingenuity to begin rotating the helicopter out of its horizontal position. The rotorcraft will also extend two of its four landing legs.

During the third sol, a small electric motor will finish rotating Ingenuity until it latches, bringing the helicopter completely vertical, and on the fourth sol, the final two landing legs will snap into position.

On each of those four sols, the Wide Angle Topographic Sensor for Operations and eNgineering (WATSON) imager will take confirmation shots of Ingenuity as it unfolds into its flight configuration. 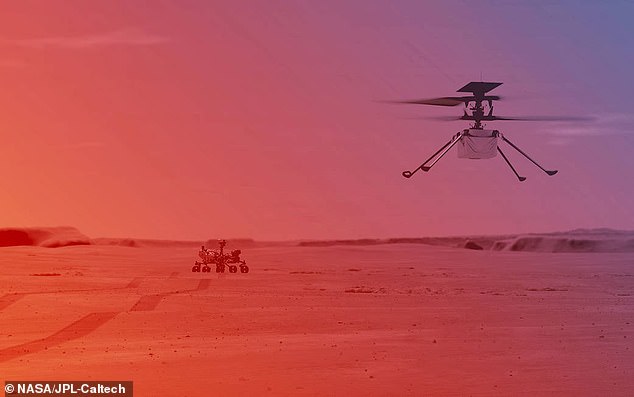 An illustration of NASA’s Ingenuity Helicopter on Mars. The space agency confirmed that the 30 days ‘test flight window’ for the rotorcraft will begin ‘no earlier than the first week of April’

In its final position, the helicopter will hang suspended at about five inches (13 cm) over the Martian surface.

At that point, only a single bolt and a couple dozen tiny electrical contacts will connect the helicopter to Perseverance.

On the fifth sol of deployment, the team will use the final opportunity to make use of Perseverance as a power source and charge Ingenuity’s six battery cells.

Once deployed, Ingenuity will have 30 Martian days, known as sols, (31 Earth days) to conduct its initial test flight.

This image shows where NASA’s Ingenuity Mars Helicopter team will attempt its test flights. Helicopter engineers added the locations for the rover landing site, the airfield (the area where the helicopter will take off and return), and the flight zone (the area within which it will fly) on an image taken by the High Resolution Imaging Experiment (HiRISE) camera aboard NASA’s Mars Reconnaissance Orbiter, which reached Mars in 2006

‘Ingenuity is an experimental engineering flight test – we want to see if we can fly at Mars,’ said MiMi Aung, project manager for Ingenuity Mars Helicopter at JPL.

‘There are no science instruments onboard and no goals to obtain scientific information.

‘We are confident that all the engineering data we want to obtain both on the surface of Mars and aloft can be done within this 30-sol window.’

The exact timing of the first flight will remain fluid as engineers work out details on the timeline for deployments. 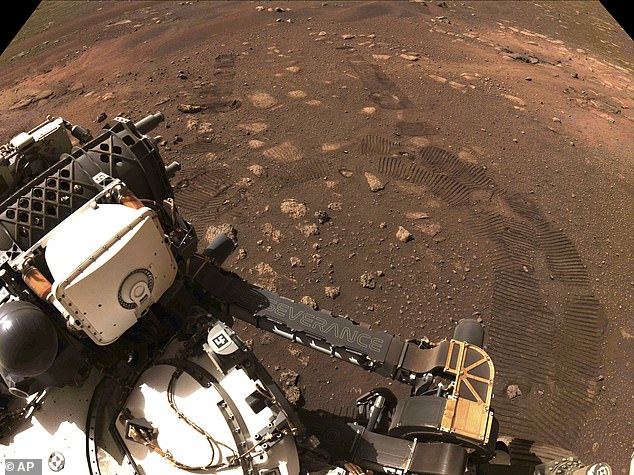 The Perseverance rover has been on Mars for more than a month, collecting data and finding a location to deploy the Ingenuity helicopter 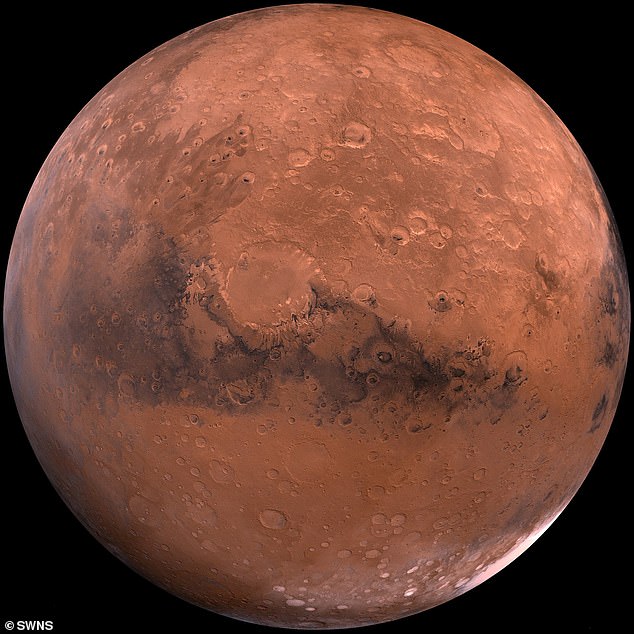 The rover currently is in transit to the “airfield” where Ingenuity will attempt to fly. Once deployed, Ingenuity will have 30 Martian days, or sols, (31 Earth days) to conduct its test flight campaign

NASA said: ‘Several factors will determine the precise time for the flight, including modeling of local wind patterns plus measurements taken by the Mars Environmental Dynamics Analyzer (MEDA) aboard Perseverance.’

Flying in a controlled manner on Mars will be far more difficult than flying on Earth, as the Red Planet has about one-third the gravity of Earth’s.

Mars’ atmosphere is also just 1 per cent as dense as Earth’s at the surface.

During Martian daytime, the planet’s surface receives only about half the amount of solar energy that reaches Earth during its daytime.

Nighttime temperatures can drop as low as minus 130°F (-90°C), which can freeze and crack unprotected electrical components.

To survive the frigid Martian nights, it will need enough energy, generated by its solar powers, to power internal heaters. 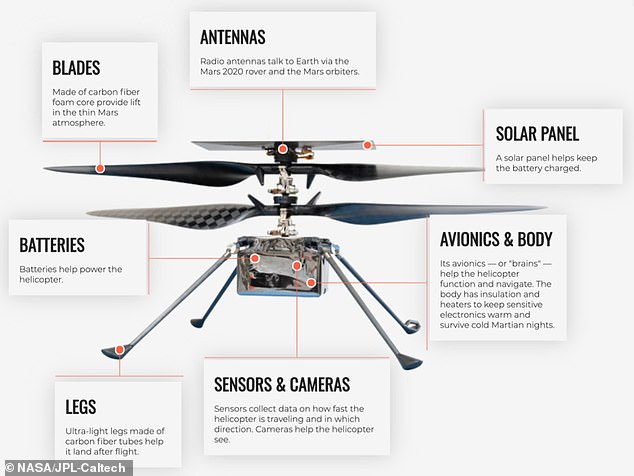 Diagram showing the different components of Ingenuity. The Ingenuity Mars Helicopter was built by JPL, which also manages the technology demonstration for NASA Headquarters

The main mission of Perseverance, or ‘big friend’, as NASA calls it, is astrobiology and searching for signs of ancient microbial life on the Martian surface.

It’s continuously sharing new images of the Red Planet, including the rock-strewn landscape that mission command used to find a take-off location for Ingenuity.

Its primary goal is to look for ‘biosignatures’ – signs of past or present microbial life – as well as gathering rock samples.

The rover will drill into the dusty surface and gather material into titanium, germ free tubes in the vehicle’s belly.

NASA aims to gather at least 20 samples with a variety of material that can be brought back to Earth for further analysis.

However, Perseverance is not bringing the samples back to Earth – when the rover reaches a suitable location, the tubes will dropped on the surface of Mars to be collected by a future retrieval mission, which is currently being developed. 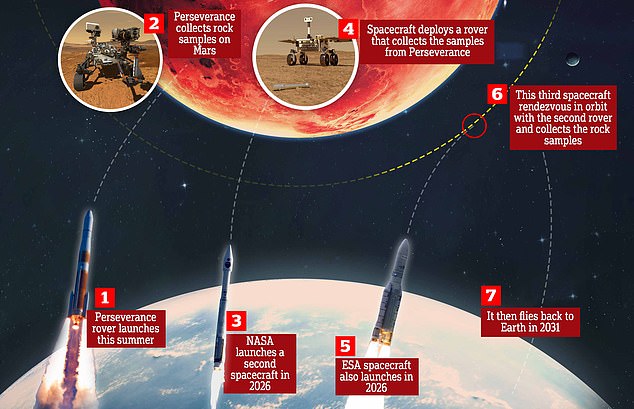 Currently, NASA and ESA plan to launch two more spacecraft that would leave Earth in 2026 and reach Mars in 2028.

The first will deploy a small rover, which will make its way to Perseverance, pick up the filled sampling tubes and transfer them to a ‘Mars ascent vehicle’ – a small rocket.

This rocket will blast off – in the process becoming the first object launched from the surface of Mars – and place the container into Martian orbit, meaning it will essentially be floating in space.

At this point, the third and final spacecraft involved in the tricky operation will manoeuvre itself next to the sample container, pick it up and fly it back to Earth.

Providing its re-entry into the Earth’s atmosphere is successful, it will plummet to the ground at a military training ground in Utah in 2031, meaning the Martian samples won’t be studied for another 10 years.

NASA MARS 2020: THE MISSION WILL SEE THE PERSEVERANCE ROVER AND INGENUITY HELICOPTER SEARCH FOR LIFE

NASA’s Mars 2020 mission will search for signs of ancient life on on the Red Planet in a bid to help scientists better understand how life evolved on Earth.

Named Perseverance, the main car-sized rover will explore an ancient river delta within the Jezero Crater, which was once filled with a 1,600ft deep lake.

It is believed that the region hosted microbial life some 3.5 to 3.9 billion years ago and the rover will examine soil samples to hunt for evidence of the life.

Perseverance landed inside the crater and will collect samples that will eventually be returned to Earth for further analysis.

A second mission will fly to the planet and return the samples, perhaps by the later 2020s in partnership with the European Space Agency.