Opposition Leader Matthew Guy’s election prospects have been dealt another blow, with new state electorate boundaries predicted to give Victorian Labor a net gain of two seats ahead of November’s state election.

An analysis of redrawn electoral boundaries by the Victorian Electoral Commission found that if the 2018 vote were repeated, two seats currently held by Labor would be won by the Liberal Party, but four seats held by Coalition MPs would be returned to Labor. 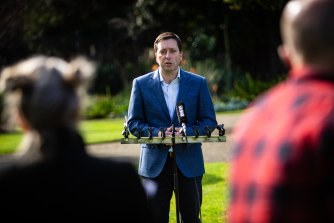 The electoral commission announced the new boundaries in October.

Releasing its analysis of the changes on Monday, the commission found the Coalition would suffer a net loss of one seat after the boundary redistribution, based on the 2018 vote.

Labor would have lost Bayswater and Bass – held by first-term MPs Jackson Taylor and Jordan Crugnale – but the Liberals would have been unlikely to hold Caulfield, Hastings, Ripon and the new seat of Pakenham.

The Coalition is entering the November election from a low base of 27 seats after the wipeout 2018 result, which left the opposition 18 seats below the 45 needed to form a majority government. 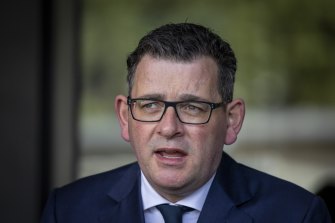 The new electoral boundaries are predicted to be a boon for Premier Daniel Andrews’ party.Credit:Wayne Taylor

According to the latest Resolve Political Monitor, undertaken for The Age, Labor’s primary vote has fallen to 37 per cent, a 6 percentage point drop since winning in 2018 with a landslide 43 per cent primary vote.

The government still retains an election-winning lead over the Coalition, which recorded a 33 per cent primary vote in the survey.

Monash University senior politics lecturer Zareh Ghazarian said he expected minor parties and independents to have success at the state poll in November, as voters turned away from the major parties. However, he said it remained Labor’s election to lose.

“I think there’s great volatility in the electorate,” he said. “We saw that at the federal election; we saw the appetite that some people have to support a non-major party candidate.”

The emergence of so-called teal independents is another headache for the Liberal Party, after the independents mopped up once-safe seats in inner Melbourne at the May federal election.

A recent poll commissioned by Climate 200, the funding vehicle that backed several teal independents at the federal election, found progressive independent candidates would receive strong support in the state seats of Caulfield, Kew, Sandringham, Hawthorn and Brighton, despite no challengers being announced in those seats.

Four of the five seats are held by Liberal MPs by margins of less than 5 per cent. Only Hawthorn is represented by Labor.

Liberal-held rural seats will also come under attack from independents.

Jacqui Hawkins, who was an adviser to former federal MP Cathy McGowan, will take on Liberal MP Bill Tilley in the seat of Benambra in Victoria’s north-east. The seat sits entirely within the federal seat of Indi, which has been held by an independent for almost a decade.

An independent candidate linked to the community independent movement is also expected to run in South-West Coast, which is held by Liberal MP Roma Britnell.

The Greens, buoyed by a strong performance at the federal election, were also hoping to pick up votes in progressive inner-Melbourne seats.

Victorian Greens leader Samantha Ratnam said: “We have good prospects of picking up seats like Richmond, Northcote, Albert Park, and even traditionally safe Liberal seats like Hawthorn, Caulfield and Brighton are in play for us at this election.”

Opposition leader Matthew Guy’s chances took a hit last week when The Age revealed his chief of staff unsuccessfully sought more than $100,000 in payments to his private company. The deal never went ahead.

On Monday, Guy said everyone had a view on the boundary changes. “I think everyone’s got a different take on regularised boundaries … The election is the election. Whatever the boundaries are, we’ll fight them. Simple as that.”

Deputy Premier Jacinta Allan said the government was not focused on commentary.

“There’s going to be a lot of conversation and chatter I’m sure over the next three to four months about what may or may not happen on November 26,” Allan said. “What we’re focused on is doing the work we’ve been elected to do.”

The boundary changes pushed 910,384 people into new districts — after the electoral commission took submissions into account — to reflect population growth, particularly in the booming outer fringes.