Home » Lifestyle » Nurse, 31, who didn't know she was pregnant, gave birth after a shift

Nurse, 31, who didn't know she was pregnant, gave birth after a shift

Mental health nurse, 31, who didn’t know she was pregnant and put weight gain down to lockdown snacking gives birth to 5lb 8oz baby girl at home after 12-hour shift

A mental health nurse, who didn’t know she was pregnant, gave birth to a baby girl at home after finishing her 12-hour shift.

Emma Hindmarsh, 31, from Sunderland, Tyne and Wear, gave birth to daughter Isabelle Rose, weighing 5lb 8oz, with the help of her husband Daniel, 34, in their bedroom.

The nurse, who had just finished a long shift at a complex care unit, revealed how she had been sufferings sharp pains throughout her work on the ward and put her weight gain down to overeating during lockdown.

And Emma and her husband Daniel, who also have three-year-old Oliver, are still in shock after welcoming their newborn daughter. 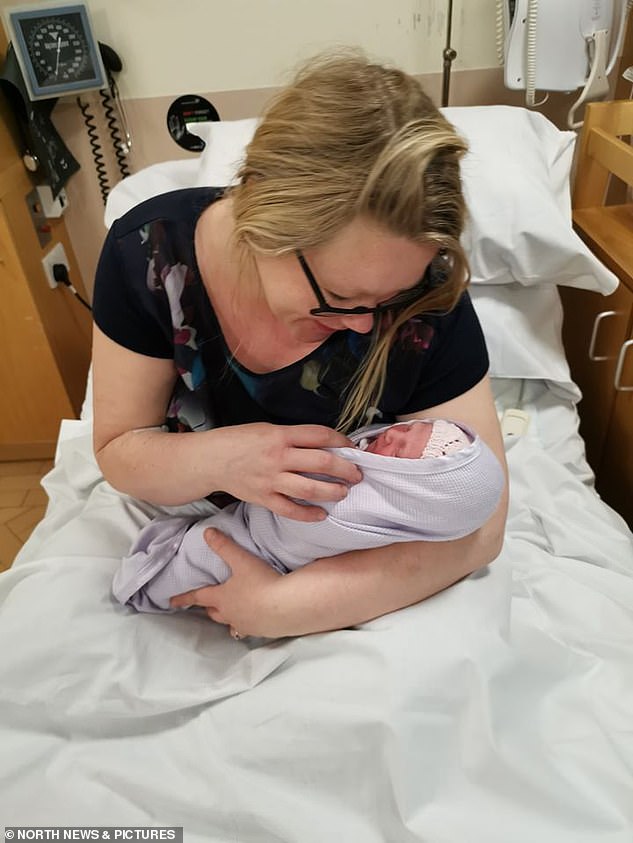 After finishing work on May 3, Emma had a shower, something to eat and two paracetamol before texting Daniel in agony from upstairs at 11.30pm.

Daniel dialled 111 before an ambulance was called when Emma’s pains progressed.

But just two hours later, Isabelle, thought to be five weeks early, was delivered with the help of Daniel and Emma’s mother over the phone before paramedics arrived.

Speaking about the night of the birth, Emma said: ‘Something didn’t feel right and I thought it could be my appendix because of the really sharp pain. 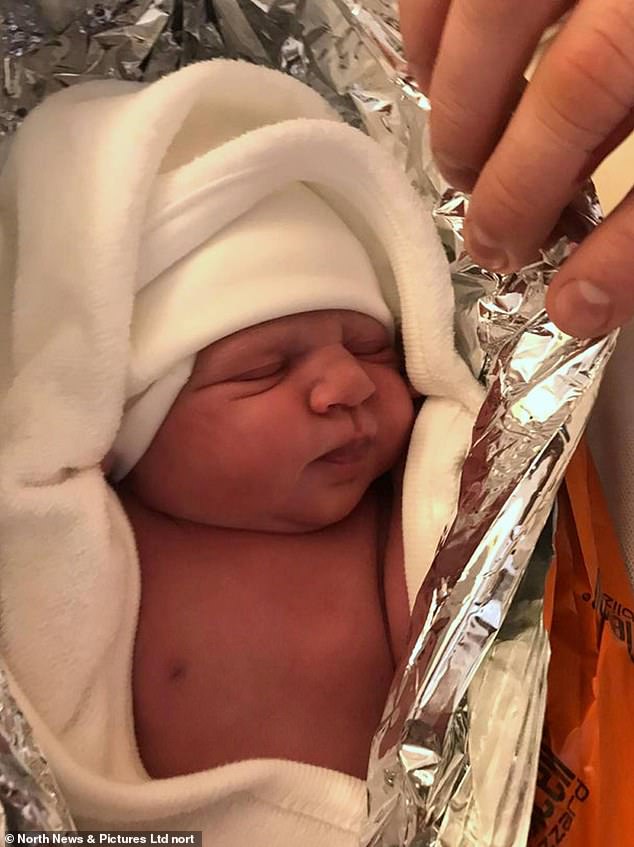 Isabelle, thought to be five weeks early, was delivered with the help of Daniel and Emma’s mother over the phone

‘We spoke to 111 and they agreed that was possible and did an assessment, to see if we could save going to hospital under the current circumstances.

‘That’s when I rang my mam to say we were waiting for an ambulance and asked if she could come and look after Oliver.’

She continued: ‘Then the pains got worse and I was lying down on the bed when my waters broke.

‘Isabelle started to appear and Daniel could see her head and my mam shouted that I needed to really push. 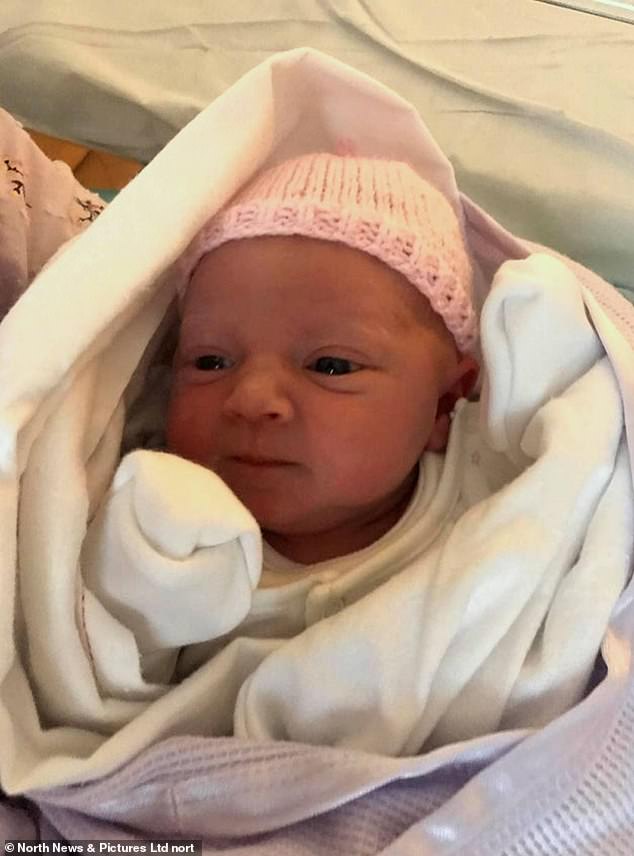 Emma said: ‘She’s here and she’s tiny but perfect and I don’t think it mattered what happened, she was coming into the world at that time’

‘I never dreamed I would be walking out to the ambulance carrying a baby. It was totally different to when I had Oliver and was induced.’

Emma revealed how she had no morning sickness and was still wearing her everyday clothes, which despite being a little tighter, didn’t make her question if she was pregnant.’

She said: ‘I had no pregnancy symptoms, I didn’t have any morning sickness, cravings, hadn’t gone off anything and I was still in my normal clothes, which were a little bit tight, but I thought that was through the lockdown and have been eating a bit more. 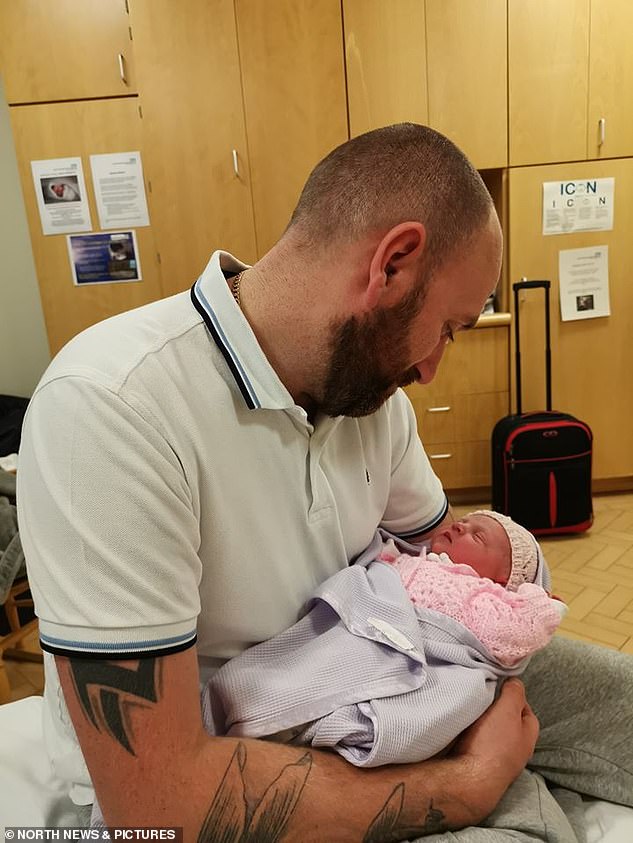 ‘She’s here and she’s tiny but perfect and I don’t think it mattered what happened, she was coming into the world at that time.

‘It’s totally surreal. I can’t put into words how it feels. It’s just so lovely that she’s ours and we literally didn’t have anything, not even a baby grow.

‘Oliver is going to be a fantastic big brother and he loves babies, so he’s just going to be besotted with her. Everyone has just been so amazing and supportive, rallying around.’

Emma and Isabelle are now at home following days of extra monitoring at Sunderland Royal Hospital where doctors said the position of the placenta may have hidden feelings of Isabelle’s movement. 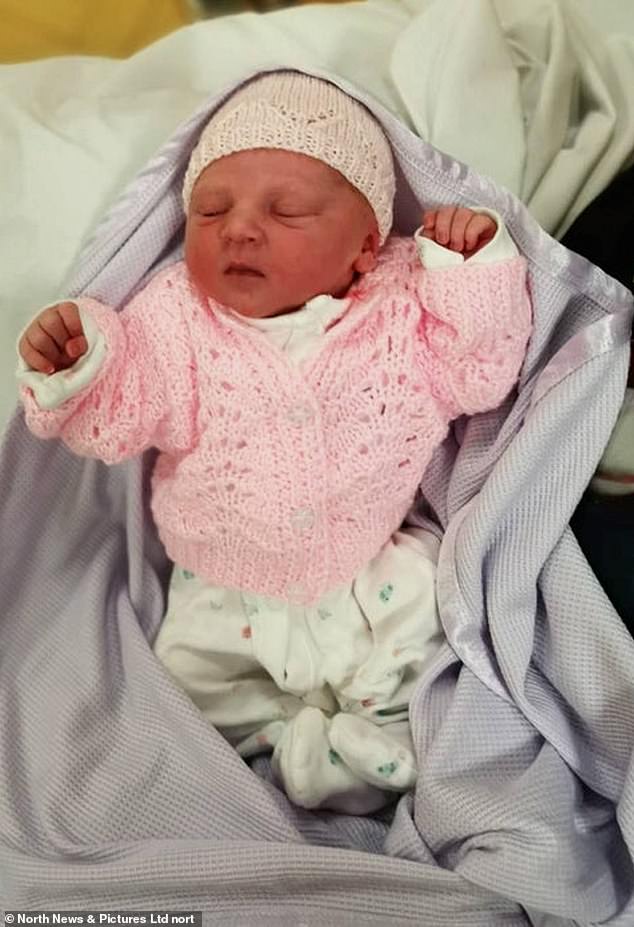 The second-time mother said: ‘Obviously now I’m on maternity and Dan is on paternity leave and it’s been a massive shock to everybody – the ambulance staff, the hospital, family and friends, but they have all been so supportive.

‘Daniel is over the moon. I think the sheer experience of it all took away the panic. He’s such a hands-on dad and so good with Oliver.’

She added: ‘My mam was just so good as well, she just talked me through it.’

Daniel, who is an engineer at Caterpillar in Peterlee, added: ‘It’s still just mind-blowing and we’re trying to get our heads around it.

‘We didn’t have any inkling at all, Emma came in from work, had a shower, something to eat and popped a couple of paracetamol.

‘Then she sent me a text from upstairs at 11.30pm saying she needed me and she was writhing on the bed in agony, so we called 111 and they put her on a wait for an ambulance.

‘Then I had to phone the ambulance back and say I think it’s labour, just because the pains seemed like contractions.

He continued: ‘I had to phone my parents and tell them my wife was having a baby and I couldn’t believe it in that moment that we were going to have a baby.

‘I just can’t sing Emma’s praises enough, she did an intensive job all day, took two painkillers and then gave birth. We couldn’t wait to get them both home.’

Daniel announced the news on Facebook, posting: ‘After coming in from a 12 hour shift last night and going to bed with the most horrendous pains Emma Hindmarsh and myself were most surprised when 2 hours and 2 paracetamol later this little one arrived completely out of the blue.