At one level, Plate of Origin is just another TV cooking show, albeit one whose own origins are shrouded in shame and scandal: the increasingly out-there views of former MKR judge Pete Evans, and the wage scandal that has haunted former MasterChef judge George Calombaris.

But this is a new dawn, even if the coming together of its three judges is presented as a decade in the making. 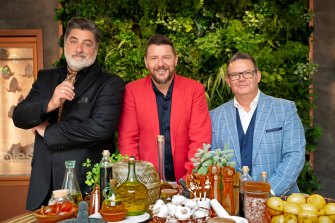 Together at last: Matt Preston, Manu Feildel and Gary Mehigan.Credit:Seven

"I was that close," MKR survivor Manu Feildel said in Sunday's premiere of his almost-inclusion among the original MasterChef line-up. "Apparently the reason I didn't get the gig at the time was my French accent."

"No, it's not," Matt Preston joked. "Gary and I both said, 'you're too good looking, we want a little Greek guy'."

The personalities of the three judges are to the fore here, and their interaction — collegial, familiar, gently snarky — is the most enjoyable aspect of a show that, no matter how much it wants to be taken seriously as a World Cup of cooking, is destined to be forever known as POO.

Among the things we quickly learn about them is that Manu laughs like Muttley, Gary Mehigan is a "food god" in India, and Matt's professed connections across the globe are a source of hilarity to his long-time colleague.

Dispatching him to find out what the competitors are up to in this Sunday's showdown, Gary says: "I'm sure you have some Lebanese roots, and certainly Indian. And every other country in the world. Off you go."

"My great-grandfather was born in India," begins Matt.

"Of course," scoffs Gary. "From Beirut to Bangalore." And to Manu: "The same with every country in the world. Philippines? 'Oh yes, my aunty used to live in the Philippines'."

Origins are a tricky business (ask a Greek and a Turk who "owns" that thick, syrupy take on coffee, say, or an Israeli and a Lebanese about hummus), but you don't need mitochondrial DNA to establish this show's lineage: the way the French duo are rapidly cast as villains is pure MKR (ditto the "you can see who wears the pants" dynamic of Indian couple Simran and Ash in this Sunday's contest).

The French hommes accused the Aussie homies of ripping off classical techniques as they tarted up meat and three veg with sous vide and turned the humble vanilla slice into something you might find in a high-end Parisian patisserie. 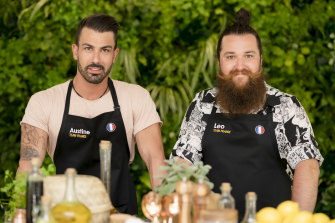 The judges rightly argued that this is precisely what defines modern Australian cooking — it's all about taking influences from elsewhere and fashioning them into new forms. Which is all well and good, but it kind of begs the question of why Australia is even represented here, doesn’t it?

Of course, they could just have asked Stew and Ethan the question everyone else on the show has no doubt been asked a million times — where are you really from? Originally? But that would be to acknowledge an uncomfortable truth about the notion of Australian-ness on display here: I am, you are, we are Australian … but especially so if you're white.

POO’s intentions are honourable enough — a celebration of the more easily digested aspects of multiculturalism. But in plating up a couple of white boys as "original" Australians, and putting them in opposition to all the ever-so-gently stereotyped hyphenate-Australians who are by implication not, it’s a missed opportunity to do something genuinely bold and all-embracing.

Perhaps something like having a pair whose take on Australian cuisine really could lay claim to being part of a long and storied tradition: grilled goanna, anyone? Muntrie mousse?

Serving that up really would have been original.