If Scott Morrison’s government had hoped the dire days of strong women producing evidence of appalling treatment at the hands of powerful men were over, or even moderating, Christine Holgate wearing “suffragette white” is here to provide a reality check.

Ms Holgate’s evidence that she had become suicidal in the days after Prime Minister Morrison called for her to go as Australia Post boss from the floor of Parliament will surely resonate across Australia’s currently fractured political landscape. 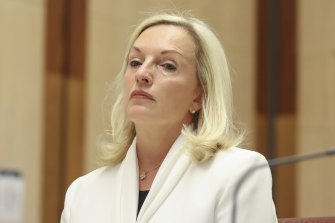 Christine Holgate takes her seat at the start of a hearing on Australia Post on Tuesday.Credit:Alex Ellinghausen

Who among those who feel let down by a political system would not empathise with Ms Holgate’s narrative of begging for a hearing from two cabinet ministers – Simon Birmingham and Paul Fletcher – of being told such a meeting would be arranged, only to hear nothing further at all?

Her assertions that she was illegally bullied out of her job and humiliated by the chairman of a board stacked with Liberal Party-connected appointees are about as damaging as could be at any time, let alone in today’s climate.

And what might the restive make of Ms Holgate’s recollection of a statement by the most politically-canny of all the Australia Post board members, Tony Nutt, who was for 10 years principal adviser to then-prime minister John Howard and later federal and Victorian state director of the Liberal Party?

Nutt, Ms Holgate said, had told her she had no choice but to stand down because Scott Morrison was demanding it.

“I was told, Christine, you need to understand it was the Prime Minister,” she recalled Nutt telling her.

The political world, in short, crashed in on Christine Holgate – right from the very top.

All because it was revealed that she had two years earlier purchased four Cartier watches worth $20,000 as rewards for Australia Post executives who had pulled together a crucial deal that ensures customers can use post offices for their banking.

The executives could have received bonuses of up to $150,000 each, said Ms Holgate, but the watches were physical recognition of the organisation’s pride in the “incredible contribution” of the executives. Today, she might buy Seikos instead, she said ruefully.

If those who brought her down over the watches thought she would go easily, however, they would have been in no doubt about their mistake when she attended a Senate hearing on Tuesday.

She arrived, as promised at the weekend, not only wearing “suffragette white” herself, but flanked by two supporters also wearing white.

“This is the day,” she said in the first minutes of her long and damning testimony, “When the chairman of Australia Post and all the other men involved in what happened to me will be held to account.”

And with that, she launched her forensic attack on some of the most powerful men in the nation.

The chairman of Australia Post, Lucio Di Bartolomeo, testified during the afternoon that he had done nothing wrong.

But this time, Christine Holgate had got in first.

Before, you might think, she could be damned without warning, as occurred last year when no less than the Prime Minister of Australia had bellowed in Parliament that if she didn’t voluntarily stand down from her job, “she can go”.