This article is part of Overlooked, a series of obituaries about remarkable people whose deaths, beginning in 1851, went unreported in The Times.

In her lifetime and for many years after, Eve Adams was variously called a “novelty girl,” “a bit of an anarchist,” “the queen of the third sex,” “a self-professed ‘man-hater,’” the author of an indecent book and, finally, Passenger 847 on Transport 63 to Auschwitz.

But Adams was also an outspoken gay writer and Polish Jew in an often homophobic, anti-Semitic, anti-immigrant America in the 1920s and ’30s, one who published an early example of American lesbian literature written by a lesbian.

Her “Lesbian Love,” a collection of short stories and illustrations, was published in February 1925. Written under the pseudonym Evelyn Addams, it explores the sexual awakenings and gender-defying nature of several dozen women of varying social pedigrees whom Adams had met in Greenwich Village and in her travels around the country as a roving saleswoman of revolutionary multilingual periodicals. She changed the names of her characters to protect their identities.

“I merely intended to describe these characters with the aim to help them,” she said later. “To show them the truth of their lives.”

Ms. Adams gave copies to friends in the Village, where she ran Eve’s Hangout, a lesbian-friendly tearoom where she hosted salons and poetry readings. (Earlier, while living briefly in Chicago she had run The Grey Cottage, another literary haunt that doubled as a refuge for gay people.) 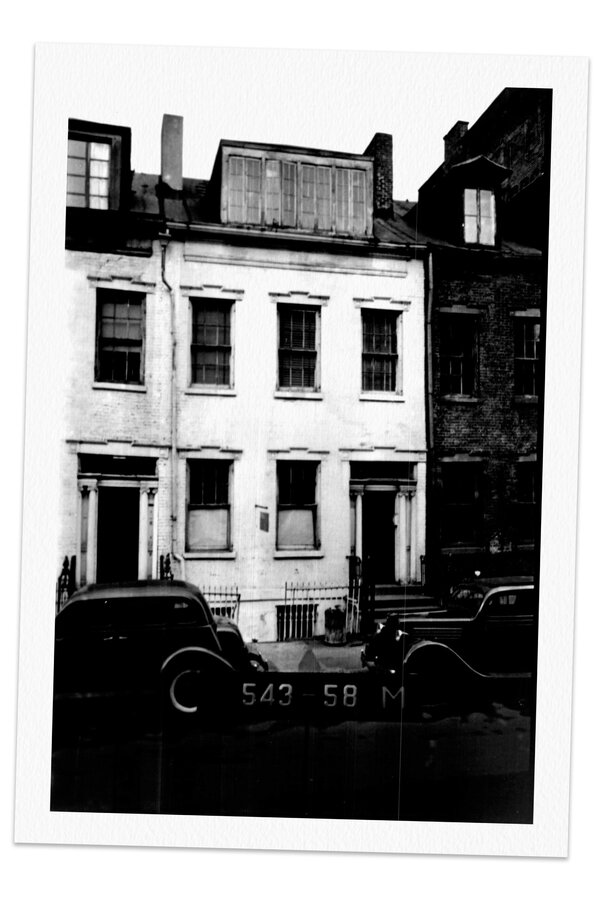 At the time, books like Adams’s were considered indecent and often burned. Her 150 printed copies of “Lesbian Love” disappeared. Over time her work faded from memory.

Her youngest brother, Yerachmiel Zahavy, lost track of her during World War II. He sent letters to the Red Cross asking about her whereabouts, but they were returned unanswered. He later looked for her and other family members in Israel and the United States but to no avail.

On his deathbed in 1983, Yerachmiel asked his grandson Eran Zahavy, then 18, to continue the search. “You must look for Chawa,” he said, using Adams’s birth name.

What he did not know was that his sister had been seized and sent to the Auschwitz concentration camp in Nazi-occupied Poland.

The younger Zahavy heeded his grandfather’s request and began doing research. He connected with a playwright who had written theater pieces about Adams, as well as a historian working on her biography, both of whom had come to her story separately. Eventually people in Israel, Switzerland, France and the United States — none of whom knew Adams during her lifetime — began jointly resurrecting the story of her life.

Chawa Zloczower was believed to have been born on June 27, 1891, in Mlawa, Poland, the eldest of seven children of Mordechai and Miriam Zloczower. Her father was a grocer, her mother a homemaker. (Some records show her birth date as March 31, 1891.)

Filled with wanderlust as a young woman, she boarded the S.S. Vaderland in Antwerp, Belgium, and, at age 20, arrived alone on Ellis Island in New York on June 4, 1912.

She spoke seven languages, including Hebrew, and wrote in a letter to a friend that she felt fully at home nowhere. “In all the world, a foreigner,” she wrote, “and in the country I was born, a Jew.”

Soon she assumed the English translation of her first name, Eve. And leaning into what her biographer, Jonathan Ned Katz, described as “her androgenous persona,” she combined “a bit of Eve, a bit of Adam” for a name better befitting herself.

Preferring men’s clothes and women’s company, Adams lived her life boldly at a time when the world considered the only decent way to live it was to keep it behind closed doors. She counted among her friends the anarchists and revolutionaries Emma Goldman and Alexander Berkman as well as the taboos-shattering author Henry Miller.

The United States government considered Adams an “agitator,” records show. Headed by J. Edgar Hoover, the “Radical Division” of the agency that would become the F.B.I. had been charged with spying on her since at least 1919.

She was arrested in 1927 by an undercover police officer, Margaret M. Leonard, who had walked into Eve’s Hangout and obtained a copy of “Lesbian Love.” The book was deemed indecent, and Adams was held on several charges, including disorderly conduct. She was convicted and spent 18 months in jail before being deported to Poland on Dec. 7, 1927.

By 1930 Adams was living in Paris and writing stories about her time in prison, submitting them to magazine editors with little apparent success. In cafes she hawked forbidden books, including Miller’s “Tropic of Cancer” (1934), which had been barred from several countries as sexually explicit.

In 1933, Adams met Hella Olstein Soldner, a cabaret singer from Germany. Adams later described their meeting as “fate.” In a letter to a friend, she called Soldner a “most beloved girl.” They lived together from then on — even after Soldner had married a man — though their relationship was never openly described as romantic.

By June 1940, as German troops were approaching Paris, the women fled to the south of France. There are suggestions in the research about them that they may have aided the Resistance. The women were arrested while living in Nice and hauled to the Drancy internment camp in Paris in December 1943.

Later that month they were crammed, with about 850 Jews, onto cattle cars headed for Auschwitz, according to Nazi police records. The journey took three days. Just 31 of the group lived to see liberation, in 1945, and though there is no record of their deaths at the camp, Adams and Soldner were not among them.

On a recent Sunday, distant relatives of Adams — some meeting for the first time — gathered in the basement of what used to be Eve’s Hangout, at 129 Macdougal Street. (It is now an Italian cafe.) Among their guests were the biographer Katz, the author of “The Daring Life and Dangerous Times of Eve Adams” (2021), and Barbara Kahn, a New York playwright who wrote or co-wrote the Off Off Broadway plays “The Spring and Fall of Eve Adams,” “Unreachable Eden” and “Island Girls,” in which Adams is a main character. The group commemorated Adams with readings from letters and excerpts from the biography.

“We have been separated for 100 years,” her relative Eran Zahavy said. “Our strength is in our union. I think Eve would be very glad that we’re here.”

A street in Paris’s 18th Arrondissement, on the right bank near Porte de La Chapelle, now bears her name, celebrating her contribution to the city as a “pioneer activist for women’s rights.” A school and nursery there are also named for her, and a dedication ceremony involving the Polish and American embassies is scheduled for this fall.

In 1999, Nina Alvarez, a college student in Albany, N.Y., found a green clothbound book in the lobby of her apartment building. When she picked it up she became the owner of what is now believed to be the only extant copy of “Lesbian Love.” Katz reprinted the book at the end of his biography.

“I feel Eve with me,” Alvarez, who went on to start her own small publishing press, said in an interview. “I sense she was a fierce person who knew what she wanted.”

And what she wanted, surely, was to encounter the world. Responding to a friend asking her for a book chapter, she wrote:

“Why, my dear man, if I wanted to write my experiences of my wanderings and people and adventures which still continue with every blessed day, it would take me years to write and I could fill volumes, not chapters.”