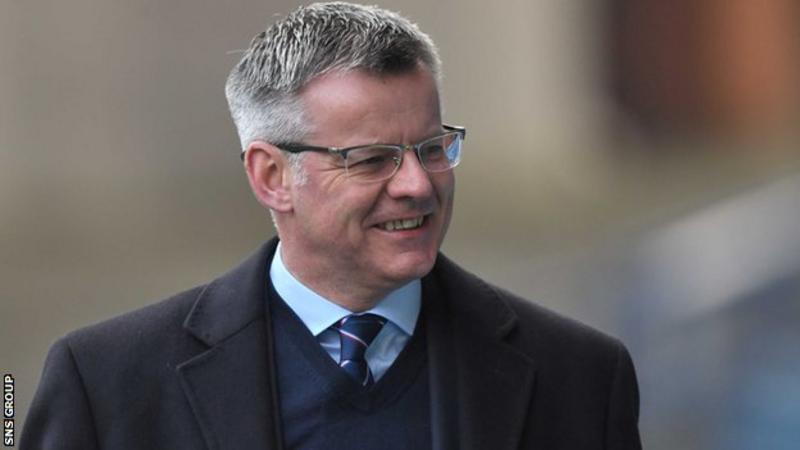 Rangers say “no fair-minded person” can take the SPFL’s vote to curtail the lower leagues in Scotland seriously.

The Ibrox club voted against the plans, and tabled their own resolution, which was dismissed by the league.

Rangers repeated their call for an independent investigation and the suspension of the SPFL’s chief executive Neil Doncaster.

“The SPFL has conducted a process which has been misleading and deeply flawed,” a statement said.

“No fair-minded person can take the outcome of this vote seriously.”

The league’s plans were passed when Dundee belatedly changed their decisive vote to back an early end to the lower divisions.

It means Dundee United, Raith Rovers and Cove Rangers have all been named champions of the Championship, League One and League Two, respectively.

Partick Thistle, bottom of the Championship by two points but with a game in hand and Stranraer, League One’s bottom side by eight points, have dropped down a division.

Hearts, who sit bottom of the top flight, four points behind Hamilton Academical, are also in danger of relegation, should the Premiership season also be called with eight rounds of fixtures remaining.

The resolution – which was backed by 81% of the 42 clubs – gave the SPFL board the power to “call” the top flight if they deem the season cannot be completed. Celtic are 13 points ahead of Rangers, who have a game in hand, while Motherwell are third, 21 points further back.

Partick Thistle and Stranraer have ruled out legal action, but Rangers say they “continue to examine all legal options available”.

“It is imperative that constructive engagement begins immediately with members to evaluate all options for completing the 2019/20 Premiership season including on the field of play,” Rangers added.

“The SPFL must allow every opportunity to do so. There is precedent within Scottish football that a league must not be compromised by changing the rules during the course of the competition.”

Rangers have repeated their concerns about “bullying” and “coercion” of clubs into back the proposal and again called for Doncaster and the league’s legal advisor Rod McKenzie to be removed while a probe was launched.

Earlier on Thursday, manager Steven Gerrard described the situation as “a mess” and now the club say the league chose to “obstruct” their proposal to forward money to struggling clubs without curtailing the season.

“The fact that this solution was not afforded sufficient consideration defies belief and further underlines the view held by many clubs that the processes and behaviours of certain individuals must now be the subject of forensic examination,” the club added.

In response, the SPFL say Rangers are yet to produce evidence to back up their claims, and believe they have acted “wholly properly” at every stage of the process.