Reading for victory! The wartime library that went underground 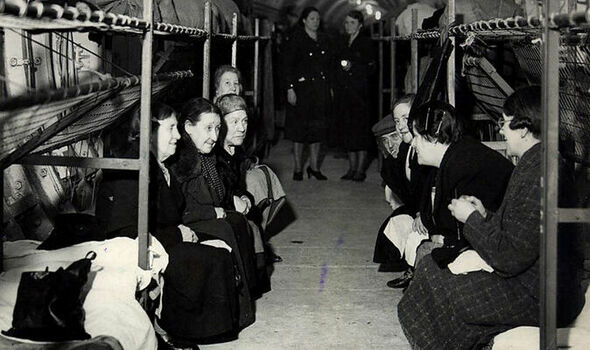 The time was 5.55pm. The date, September 7, 1940. Fortunately, nobody was killed by this opening salvo on the first night of the Blitz, but chief librarian, George Vale, was determined to do what he could to save the surviving volumes.

Before rushing to the nearest air raid ­shelter, Vale and his deputy, Stanley Snaith, hurriedly hauled a tarpaulin over the ­shattered glass and mess of smoking paper.

That might well have been the end of Bethnal Green’s library until the cessation of hostilities, but Vale was determined Hitler would not stop a single Londoner from accessing a library book, and he set about planning a pioneering social experiment that would transform lives.

He wanted to open the country’s only underground library in the nearby Tube station – a project which would become one of the great resistance stories of the Second World War.

Tragically today, in Ukraine, a similar ­situation is playing out. On March 11, Russian air strikes destroyed the Chernihiv Regional Library for Youth in northern Ukraine, leaving a pile of smoking timber and the powdery black remains of thousands of destroyed books.

At least nine other libraries have suffered damage or complete destruction since the Russian invasion began.

Libraries, like schools, museums and ­hospitals are not military targets and yet they are being ruthlessly targeted by Russian troops.

Where once librarians worked in an atmosphere of tranquillity, now they find themselves on the front line.

But Ukraine’s defiant librarians have come out fighting and now as well as issuing books, they are ­writing what could end up being one of the greatest resistance stories of this war.

“We have set up bomb shelters in many of our country’s libraries and are providing shelter to many families,” Oksana Brui, ­president of the Ukrainian Library Association and Library Director of Igor Sikorsky Kyiv Polytechnic Institute, said, her tone full of defiance.

“Our libraries are buzzing like hives, full of librarians, readers, refugees and volunteers.” Oksana is proud of the way the library service is reacting to the crisis. “Many of our libraries have turned their underground storage spaces into bomb shelters for local communities – they are cosy with lots of interesting books around! Tea and support is also offered.”

She acknowledges the importance and power of trustworthy information.

“Ukrainian librarians are warriors against fake news and hostile information,” she says. “Libraries stand for truth and information. We are the strategic weapon in the fight against disinformation.”

If it all feels rather familiar, if depressing in 21st-century Europe, the parallels are indeed striking.

Back in wartime London, the library in Bethnal Green Underground station, just a short walk across the park from its destroyed home, was completed in October 1941 and began loaning out the saved books.

Just 15 feet square, the new facility was built with a grant of £50 approved by the council.

The emphasis was firmly on escapism. Romance sat alongside literary classics, children’s books, poetry and plays.

“The library had a captive audience during a raid when the doors to the shelter were locked,” says author Kate Thompson, who researched this remarkable story for her new novel.

“Many looked to the past for comfort, reassurance and escape, so historical fiction like Gone With The Wind and Pride And Prejudice flew off the shelves.”

Titles such as Treasure Island, Secret Garden and other classics, including Enid Blyton, nourished young minds and helped children to escape the unfolding nightmares above.

At 78 feet below ground, it was the ideal place to hide. A week after the Blitz began, locals defied official orders not to shelter in Tube stations, and claimed their right to safety.

Less than three months after the destruction of the library, Bethnal Green Borough Council officially leased the disused station from the London Passenger Transport Board.

It was to become a haven for up to 7,000 people every night who were able to stay safe in metal bunks that stretched three-quarters of a mile up the eastbound tunnel.

Meanwhile, throughout the ­summer, the westbound tunnel of the new shelter echoed to the din of hammers and saws as the tracks were gradually boarded up and a 300-seat theatre with a stage, spotlights and a grand piano emerged in the gloom.

A café was built, serving hot pies and bacon sandwiches. There was a doctor’s ­surgery and a Women’s Voluntary Service nursery, which enabled women to go out to work knowing their children were safe.

Kate Thompson had first learned about the underground library at Bethnal Green Tube station from Pat Spicer, now aged 92, while researching her debut novel in 2015.

Pat, who grew up locally, can remember walking up the long, gloomy ­tunnel from her metal bunk at the age of 14, and borrowing Milly-Molly-Mandy, by Edwardian author Joyce Lankester Brisley.

The comforting tales of a little girl in a pink-striped dress were to prove life-changing for her.

“Milly-Molly-Mandy sparked a life-long love of reading,” reflected Pat. Thompson uncovered documents at Tower Hamlets Local History Library and Archive which chart the work of George Vale and Stanley Snaith in their own words.

“The opportunity of founding a Tube ­shelter library was too good to miss,” wrote Snaith in an article in a 1942 edition of Library Review.

“Libraries in Tube shelters are something new under the sun. It is, perhaps, the least pretentious branch library yet… it is a mere sentry box of a place. We could have done with more room but the powers that be did not see eye to eye with us.”

He went on to explain, proudly, a typical evening’s activity as the sirens wailed above ground. “Each dusk sees the first contingent making its way down to the bowels of the earth.

The well and the ill, the old and the young, they come trooping down, carrying carpet bags, parcels, bedding in sheets or drab sacking… rough people, nice people, typical East Enders.

In the Library, the youngsters are vocally busy with their book-selection, but why should they not chatter to their hearts’ content? They have little enough brightness in their lives, and this is no time for repression.”

Other much-loved libraries were destroyed by Nazi bombing raids, including those in Coventry and Exeter.

But various solutions were found. “If people couldn’t get to the books, librarians decided they would take books to the people,” says Thompson, who cites the example of the mobile library of St Pancras, launched midway through the Blitz.

“What can be more gratifying than the thought of those plucky librarians racing through London’s cratered streets to deliver the gift of books to people in bombed homes?” she asks.

“Reading for Victory saw library ­membership soaring during the Second World War among a new generation of working wartime women, liberated from domestic drudgery. They turned to libraries for a thumping good read, to take their mind off the danger, and developed the library lending habit their parents never had the time for,” she adds.

Sadly, the underground library’s home suffered its share of tragedy. The Bethnal Green Tube Disaster of March 3, 1943, was the UK’s largest single loss of civilian life during the war when 173 people fleeing an air raid were crushed to death when the entrance to the station became blocked.

At the end of the war, the library was ­dismantled, together with the bunks, theatre and the rest of the underground facilities, when London Passenger Transport Board took back the station from the Bethnal Green Council. The children who used it are now in their nineties, but the memories remain embedded in their hearts.

“It was a sanctuary to me,” explains Pat Spicer. “By 1943, I was 14 and there had been so much horror, the Blitz, the Tube disaster. You can’t imagine what that library represented to me as a place of escape and learning. It had a profound effect on my life.”