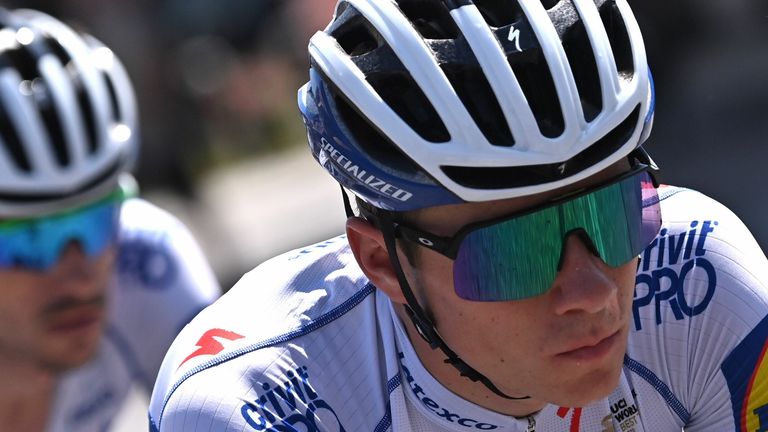 Remco Evenepoel has fractured his pelvis and damaged his lung after crashing into a ravine during the Giro di Lombardia on Saturday.

The race favourite went over a bridge barrier during a descent but was conscious when paramedics attended the scene.

Evenepoel remained conscious at all times while he was assessed in hospital but X-rays showed he has fractured his pelvis and has a right lung contusion.

The Deceuninck-Quick Step rider, 20, was around fourth in the leading group who were descending off the Colma di Sormano – the highest climb on the race.

“One of the favourites at the start of the season’s second Monument, Remco Evenepoel crashed inside the last 50 kilometers, on the descent of Sormano, hitting a bridge wall and going over it into a ravine,” a team statement read.

“Placed into a precautionary neck brace and taken to the Como hospital by ambulance, Remco was conscious at all times as he underwent a series of examinations to reveal the extent of his injury.

“Unfortunately, the X-rays showed a fractured pelvis and a right lung contusion, which will keep Evenepoel – a winner of four stage races this season – on the sidelines for the upcoming period.

“Our rider will remain in the hospital overnight under observation, before flying on Sunday to Belgium.”

The Belgian prospect has more wins than any other rider this season with nine, which include victories at the Tour of Poland and the Volta a Burgos.

The Tour of Poland is also the race where Evenepoel’s team-mate Fabio Jakobsen crashed at the finish line on stage one.

END_OF_DOCUMENT_TOKEN_TO_BE_REPLACED

END_OF_DOCUMENT_TOKEN_TO_BE_REPLACED
This website uses cookies to improve your user experience and to provide you with advertisements that are relevant to your interests. By continuing to browse the site you are agreeing to our use of cookies.Ok