London Is Open. How many times did we hear the city’s two-bob chancer of a mayor Sadiq Khan parrot that trite slogan in the wake of the Brexit referendum?

He even lit up the London Eye in the colours of the EU flag to proclaim that despite the Leave vote, the city welcomes all-comers and was still a great place to do business. No one had ever suggested otherwise.

Until now. Khan has just decided to do to London’s economy what his namesake Genghis did to Asia and China in the early 13th century.

He’s laying it to waste. On the day the Government urged as many people as possible to return to work this week, Khan declared war on mobility. 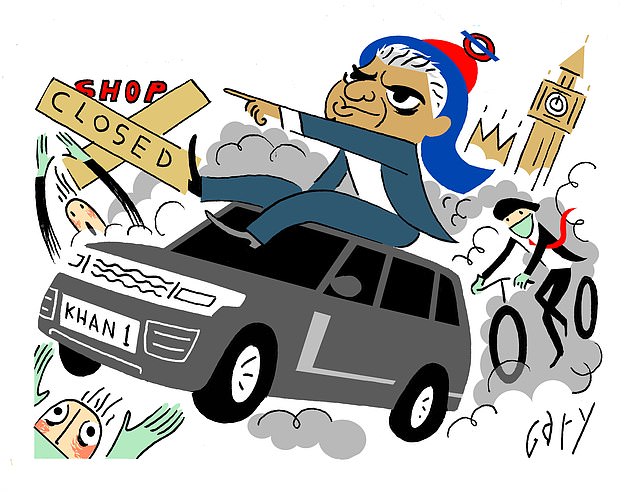 Unveiling an insane policy which could do more long-term financial damage than coronavirus, he imposed a crippling 30 per cent increase in the congestion charge to £15 a day.

With restaurants and theatres on their knees and facing an uncertain future, even when lockdown is lifted, he also extended the hours from 7am-6pm to 10pm and, for the first time, to Saturday and Sunday. Drive into town for a pre-theatre supper and a show?

Have you got money to burn? Bang goes the West End. Fancy a little light shopping in Oxford Street at the weekend, or a leisurely Sunday brunch in Covent Garden?

Forget it, unless you are prepared to take your life in your hands on the Underground.

With Tube, bus and train capacity still well below normal and people being advised to avoid public transport wherever possible, it’s crazy punishing them for using their cars.

Especially when the safest way to travel right now is in your own vehicle.

The congestion charge comes on top of an ultra-low emissions zone levy (ULEZ) of £12.50.

So if you own an older car, which doesn’t meet the latest emissions standards, it will cost £27.50 a day to drive to work.

That means, for instance, someone working overnight in Central London, who has no option but to use, say, their 2013 Fiesta diesel, will have to pay not once but twice — once for driving in, and again for driving home the next day.

They’d be better off on the dole. T hat’s a lot of money out of anyone’s pocket. Yesterday, everyone from an independent contractor for Thames Water to a solicitor doing vital work updating wills rang LBC’s Nick Ferrari to complain that they would no longer be able to afford to work in Central London.

There’s more. A couple of weeks ago, I warned you that — with the collusion of the Government — councils (not just in London) would use the crisis to make temporary cycle lanes permanent.

Right on cue, Khan has announced the full-time closure of main roads and says he intends to create ‘one of the world’s largest car-free zones’ in Central London, to encourage more cycling and walking.

London’s a sprawling metropolis, not a village like bike-happy Amsterdam. Making it traffic-free will strangle commerce.

Never mind plumbers and other tradesmen, what about ladies who lunch? They’re not going to want to walk far in their new Jimmy Choos.

And who is going to turn up to a black-tie dinner at The Savoy on a pushbike? Lest this sounds like elitist pleading, tens of thousands of jobs from waiters, barmen and dishwashers to chefs and doormen all depend on thriving restaurants and hotels.

Not to mention the myriad businesses that supply them. The traditional retail industry is in the kind of retreat not seen since Napoleon turned his back on Moscow.

Yet London’s mayor is proposing to drive still more customers away. The combined effect of all this green madness will drain billions from an already depleted economy.

The Welsh Windbag said that if Mrs Thatcher was re-elected: ‘I warn you that you will be homebound, when fares and transport bills kill leisure and lock you up.’

Who would have thought — as Kinnochio raged about Liverpool’s Militant council chief Degsy Hatton — that one day a Labour mayor, a LAY-BER mayor, would scrap free travel for schoolchildren and pensioners?

If the Conservatives had slashed concessions for the elderly and children, Labour would be screaming blue murder.

Soon Central London will be fit only for those on the Sunday Times Rich List and assorted ‘street people’ with nowhere else to go.

Once the lunacy of Khan’s transport policies sinks in, all those foreign investors assured that ‘London Is Open’ and a great place to do business will run a mile.

Welcome all-comers? Khan’s London doesn’t even welcome builders from Bromley. Sadly, gormless Government ministers have allowed Khan to get away with blaming the virus and ‘Tory austerity’ for his own incompetence.

His stewardship of TfL, indeed London as whole, has been a complete clustershambles.

Bus and train fares, which will increase above inflation, would have had to rise regardless of the crisis, because of his mismanagement.

Khan has presided over a knife crime epidemic which has been allowed to flourish while he has been scoring cheap political points — picking fights with President Trump and trying to overturn the referendum vote.

But wait. As Old Blue Eyes said, the best is yet to come. After announcing congestion charge increases, fare rises, more bike lanes, road closures, scrapping free travel for kids and oldies and declaring London the world’s most car-free city, Sadiq set off for work…

In a £300,000, five-litre, armoured, chauffeur-driven Range Rover, provided by Scotland Yard for his ‘safety’, complete with armed police escort.

To protect him from what, precisely? Say what you like about his predecessors. And I have. But they didn’t need a tank-like, Trump-style ‘Beast’ mayoral limo.

OK, so Red Ken kept the odd black cab meter running while he finished his second bottle of Sancerre in City Hall. Most of the time he travelled by Tube.

Boris famously cycled everywhere, even after his second bottle. London’s current mayor is merely the latest in a long line of socialist hypocrites.

Do as I say, not as I do. The tragedy is that because of the coronavirus crisis, the local elections have been postponed and he’ll get an extra year in office.

At least it gives the Tories 12 months to find a credible candidate. Khan may think he’s a shoo-in, but London is winnable for the Conservatives, as Boris proved, even though it’s a Labour city.

How are all those Leftie millennials going to react when they realise they can’t get an Uber home any more because the roads are closed and the drivers have all gone broke?

How are ordinary Londoners going to take being told to pay £137.50 a week just to drive to work in town?

That’s if they’ve still got a job to go to, after the shops and restaurants and theatres have called in the receivers?

But for now this posturing pipsqueak is free to slash and burn, before climbing back into his top-of-the-range, gas-guzzling, planet-destroying Range Rover.

Until then, under Mayor ‘­Genghis’ Khan, London Is Closed.

Who was that masked man? 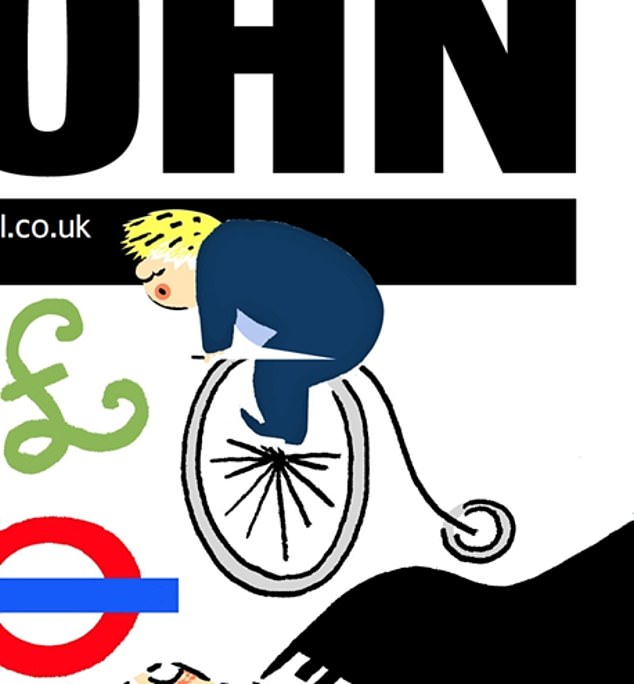 When I wrote about the latest cycle lane lunacy ten days ago, I joked that it was only a matter of time before they brought back penny-farthings.

Gary’s cartoon (above) had Boris riding one in the background.

On Friday, this Lone Ranger was photographed crossing London’s Battersea Bridge on, er, a penny-farthing, complete with coronavirus face mask. You couldn’t, etc. 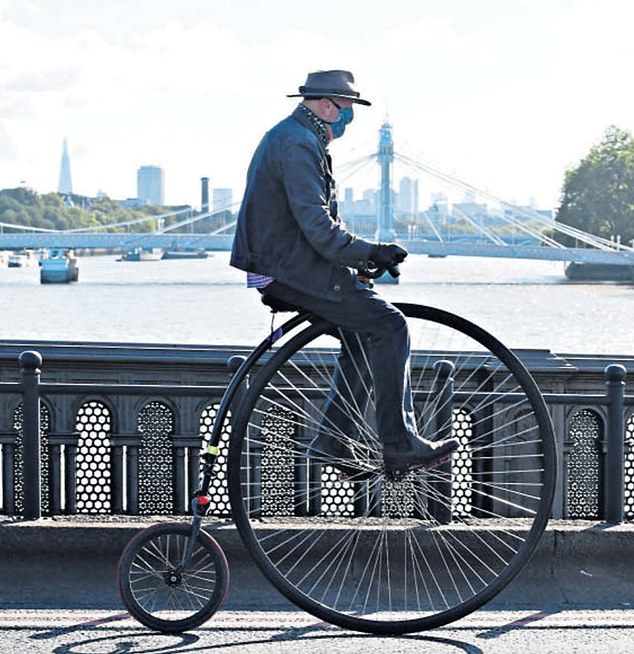