Rosacea sufferer claims £19.95 cream made from capers calmed skin down

Rosacea sufferer, 26, whose skin felt like it was ‘on fire’ claims £19.95 cream made from CAPERS was able to finally calm her condition in days

A young teacher whose rosacea got worse when her GP mistook it for acne has claimed a £19.95 cream made from capers was able to finally calm her skin down in just a matter of days.

China Collins, 26, from Truro in Cornwall, who first started noticing redness and small pustules around six years ago when she was aged 20, says when her flare-ups became more severe they made her feel really self-conscious.

‘I felt helpless because I didn’t know what I could do to help myself,’ explained the primary school teacher. ‘I was left with such sore skin to start with from using the completely wrong ingredients, and my face used to feel like it was on fire.’

After trying several natural solutions and treatment prescribed by the GP, China found an unlikely solution in the form of Kalme Day Defence and claimed she noticed a reduction in redness within a couple of days.

Now, China has been using the range for 10 weeks and claims her rosacea has all but disappeared. 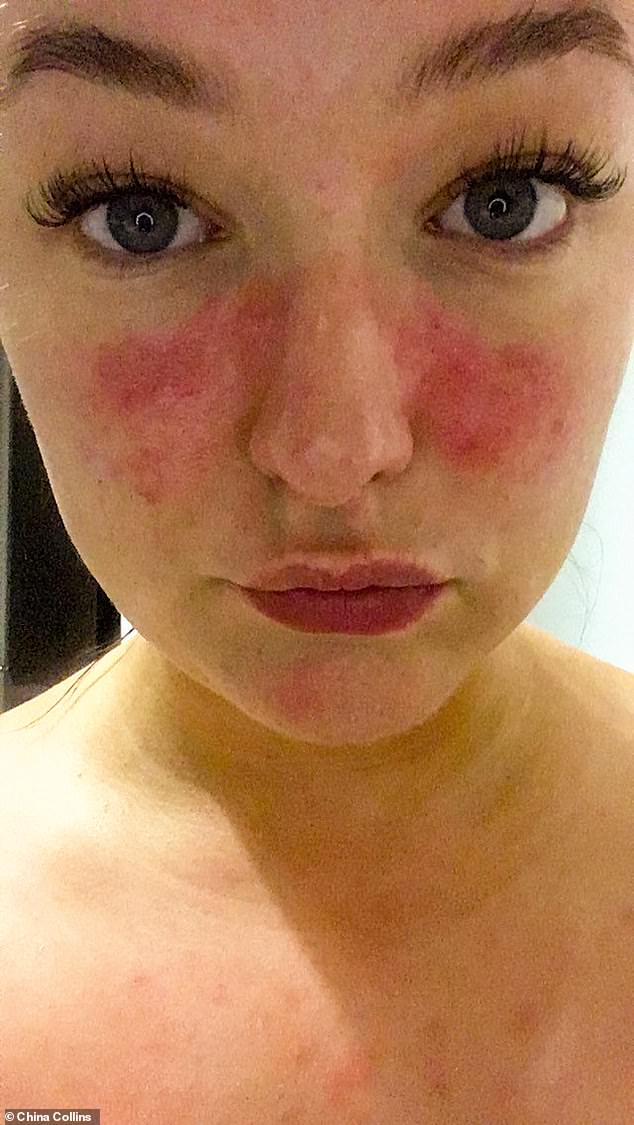 China Collins, 26, from Truro in Cornwall, whose rosacea got worse when her GP mistook it for acne has claimed a £19.95 cream made from capers was able to finally calm her skin down in a couple of days. Pictured, during a flare-up in June 2019 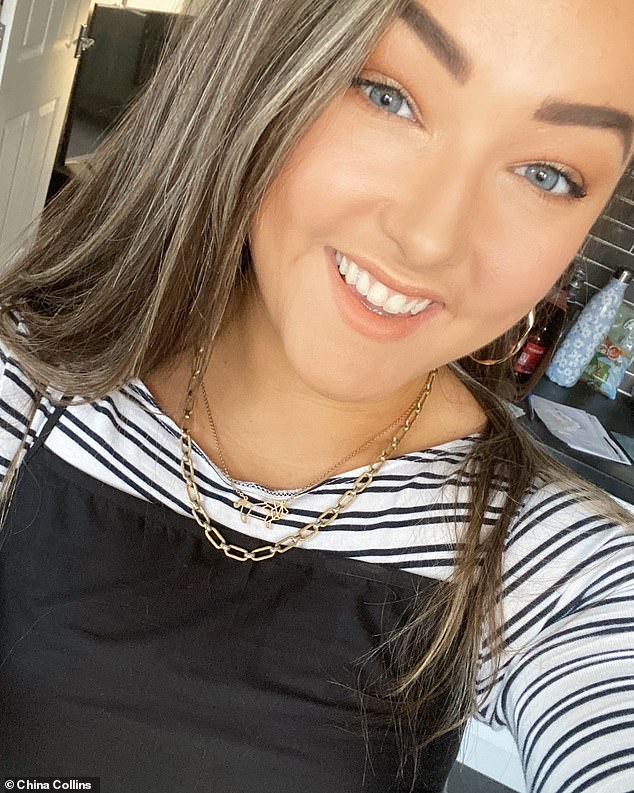 The primary school teacher first started noticing redness and small pustules around six years ago when she was 20-years-old. Pictured, after applying the cream in April 2020

China says that when she was 20-years-old her redness was only mild, so she didn’t discover it was rosacea until 2017, when it started to become more severe and noticeable.

‘Nobody in my family has rosacea,’ she explained. ‘One of my five sisters does have sensitive skin but nothing like I had.’

‘I believe that my rosacea was triggered through a combination of genetically sensitive skin combined with the use of a harsh skincare routine through my teens and 20’s.’

China claimed that she noticed a reduction in redness within a couple of days of using £19.95 Kalme Day Defence (pictured)

‘I used to use highly scented products and absolutely loved a face scrub; I would scrub my face with harsh exfoliator, sometimes twice a day, always focusing on my nose and cheek areas.

China believes she severely damaged her skin barrier during this time, which may have had an impact on triggering her rosacea.

‘I think it took me so long to realise it was rosacea because I had never heard of it before, I had never seen it before,’ she explained.

‘So I had no point of reference or any knowledge of symptoms and triggers to point me in the direction of rosacea.

‘It’s so unknown about in general skincare. Even now I still find myself having to explain what it is to people.’

She continued: ‘I have always been an avid make-up wearer as I have always struggled with spots even before my rosacea.

‘My flare-ups used to make me not want to go out even with lots of make-up on as it would hide the redness but the rough bumpy texture from the pustules would really upset me.’

China went on to say that she works with children, who often have no filter.

‘They have asked me about bumps on my skin and will nearly always point out if I have a flushing flare-up,’ she said. ‘I have also been asked if I’m sunburnt a few a times.’ 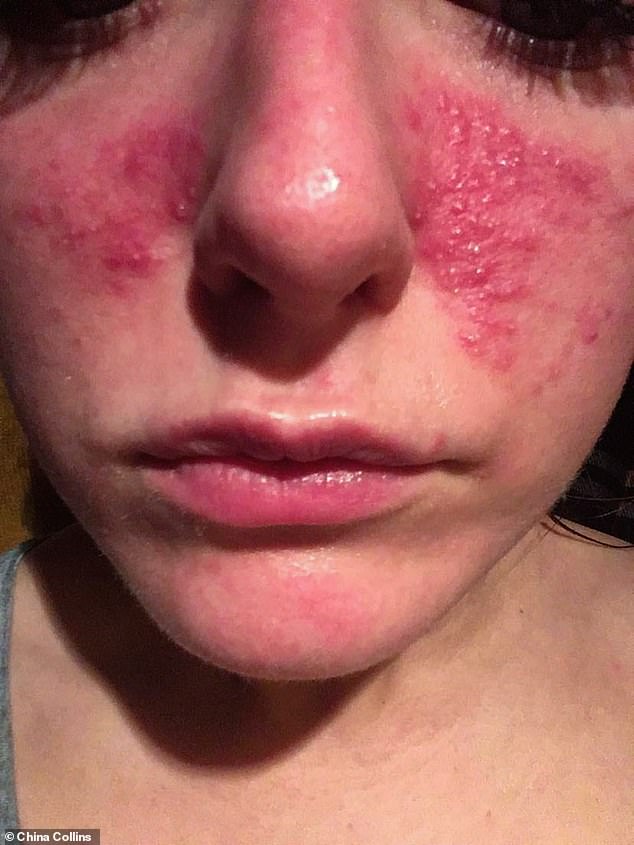 China says that when she was aged 20, her redness was only mild, so she didn’t discover it was rosacea until 2017 when it started to become more severe. Pictured, during a flare-up in January 2018 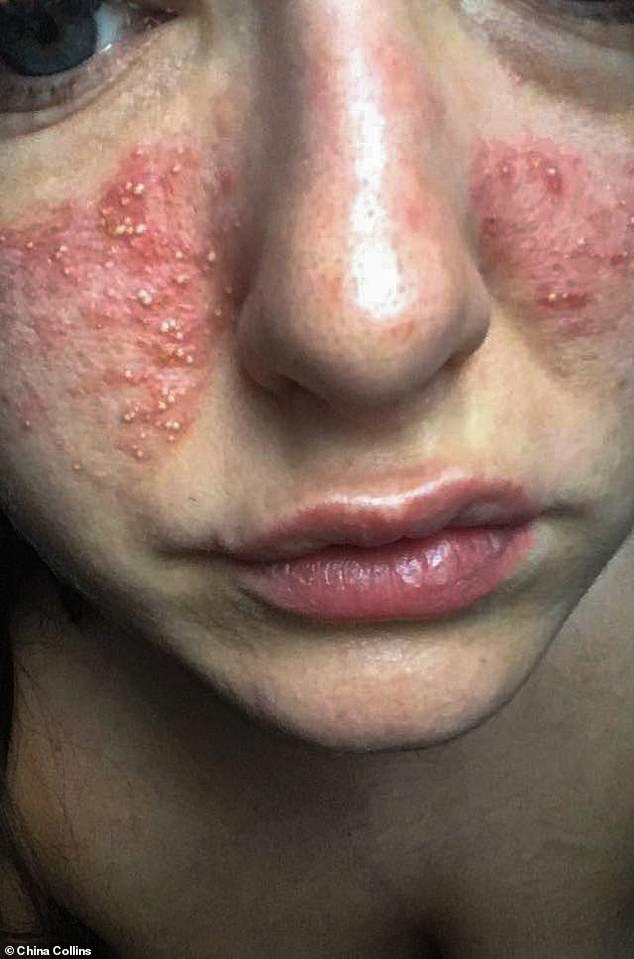 The primary school teacher says her flare-ups used to make her not want to go out even with lots of make-up on. Pictured, during a flare-up in February 2018 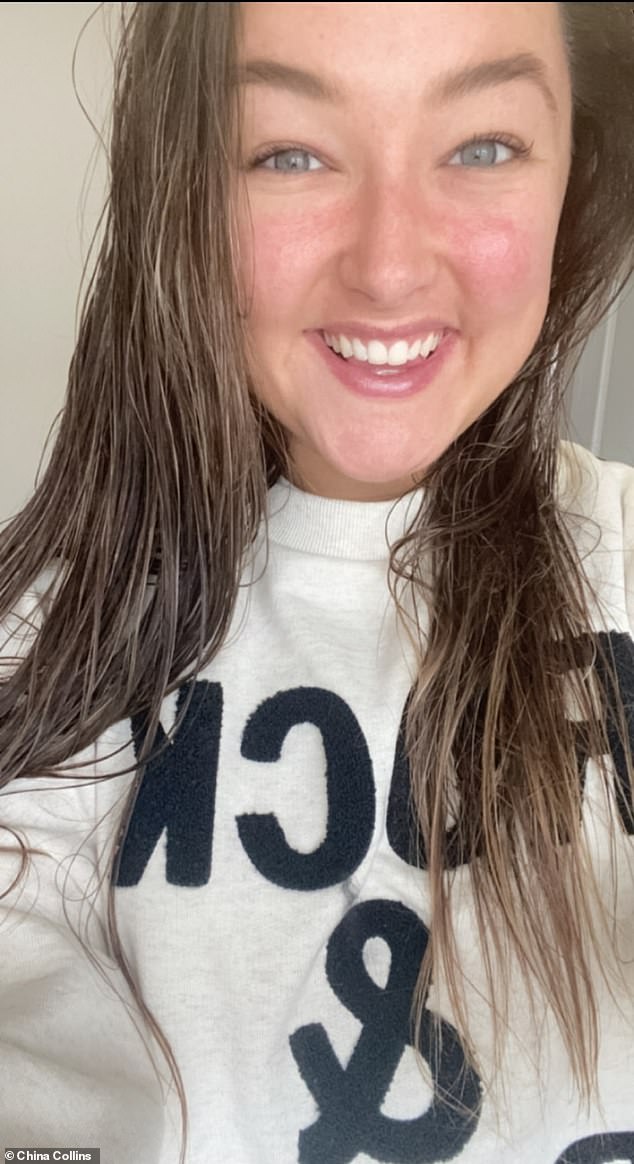 The teacher started using Kalme Day Defence after hearing about it online, and claimed she noticed a reduction in redness within a couple of days. Pictured, after applying the cream in April 2020

China went on to say that at a few points she got quite depressed about her skin.

HOW DOES KALME SKINCARE WORK?

The KALME skincare is a naturally active but hard-working skincare range containing a patented extract of capers that has been scientifically tested and shown to help combat the symptoms of rosacea and skin sensitivity by up to 70%.

With its 4-way action the range helps to combat ruddiness and sensitivity, and offers protection from UV damage (which can be equally from cold blustery winds as it can from sun), 24-hour moisturisation and a strong antioxidant action.

KALME products contain a patented caper extract called Derma Sensitive, which has been proven in clinical trials to reduce skin redness and sensitivity by up to 70%.

KALME Day Defence SPF25 contains a patented form of micronised zinc oxide to give a transparent finish on the skin and a certified chemical-free SPF protection of 25 using a pure zinc sun filter.

‘When it was at its worst and I was really struggling to control it,’ she said. ‘I just felt like there was no way to get rid of it and I really withdrew myself from my family and friends.’

‘I can see how people can become very depressed with an ongoing skin condition.’

‘If you let it then it can start to affect many areas of you life.

‘All it can take is a few mean words or people staring at your skin and it’s enough to make you want to shut yourself away.’

She continued: ‘Luckily, I have been surrounded by kind friends and family, but even so I have still struggled to control my negative feelings about my skin.

‘I can’t imagine what it must be like for people who get badly treated or don’t get the right support about their skin.

China recalls the worst flare-up she has had was Christmas 2017, which prompted her first and only visit to her GP.

‘I was prescribed a 2.5% Benzoyl Peroxide gel (topical acne medication) as they thought it was acne due to my age,’ she said. ‘Initially the gel cleared my skin up.

‘At the time my both cheeks were fully covered in small sore pustules. I remember not wanting to join in with any of the festivities and was set to bail on my New Year’s Eve plans.

‘I was so pleased that the gel had cleared up my pustules on this occasion.’ 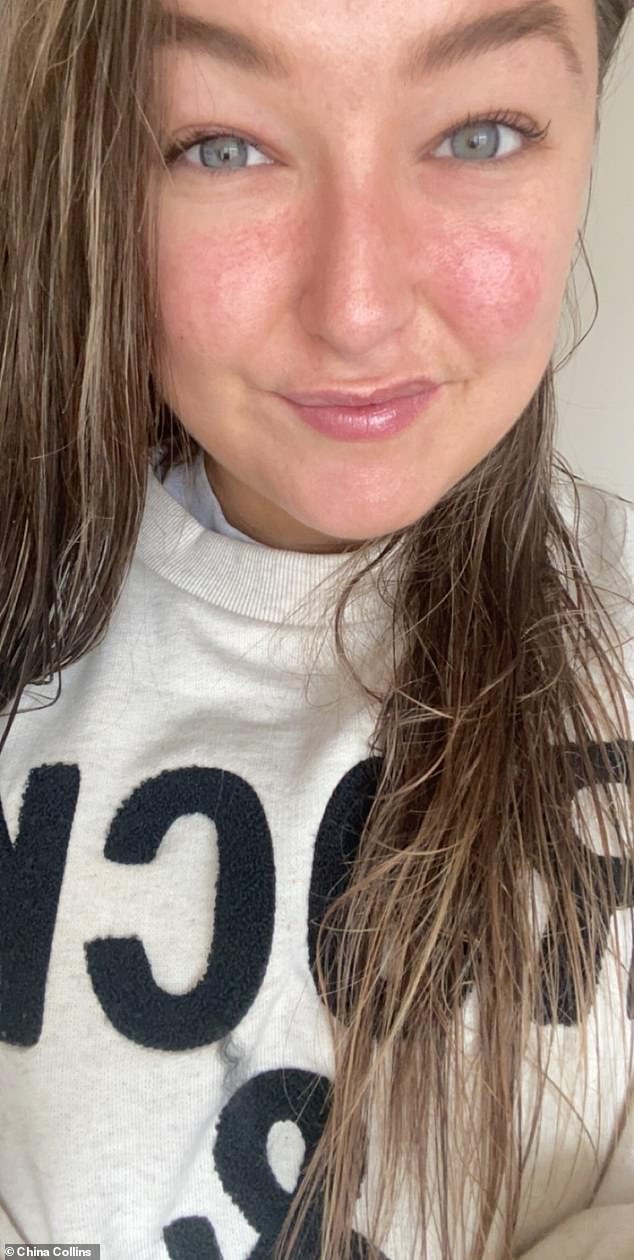 China has been using the range for 10 weeks and claims her rosacea has all but disappeared. Pictured, after applying the cream in April 2020 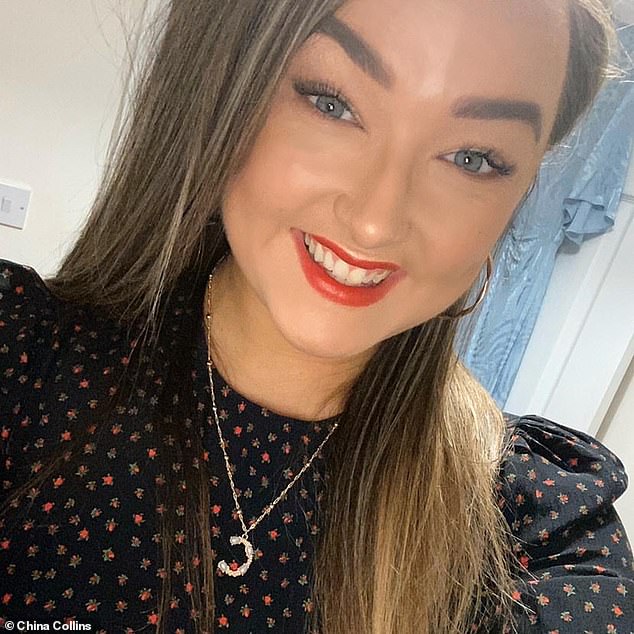 China, who works with children, has been asked whether she is sunburnt a few a times due to her rosacea. Pictured, after applying the cream in April 2020

However, China claims that within a very short time the gel stopped working and severely dried out her skin.

Rosacea is a common but poorly understood long-term skin condition that mainly affects the face.

Symptoms often begin with episodes of flushing, where the skin turns red for a short period, but other symptoms can develop as the condition progresses, like spots, papules and pustules.

It can be controlled to some degree with long-term treatment, but sometimes the changes in physical appearance can have a significant psychological impact.

Rosacea is a relapsing condition, which means there are periods when symptoms are particularly bad, but less severe at others.

See your GP if you have persistent symptoms that could be caused by rosacea. Early diagnosis and treatment can help stop the condition getting worse.

‘When nothing that I was trying or that the doctor had given me was working I went to my sister for skincare advice as she is into more natural forms of skincare,’ explained the teacher.

‘On her advice I eliminated fragrance from my routine and started using gentler skincare ingredients.

‘This did start to benefit my skin but I was still getting flare-ups, although they were not as aggressive.’

Through her sister’s influence, China started researching into more natural products specifically for rosacea, as normal skincare products, even the more natural ones, were still not tackling her skin as much as she needed them to.

‘That is when I came across Kalme products with their special caper extract for reducing redness,’ explained China.

‘I read about them on social media and a lot of people with rosacea were posting really positive reports of their effects so I got hold of some and have been using them for about two months.’

‘I noticed the redness reduce within the first couple of days of using the products and they felt really soothing on my skin.’

China went on to explain how the Kalme cleanser took some getting used to as she usually applies a balm or gel cleanser with water to rinse. 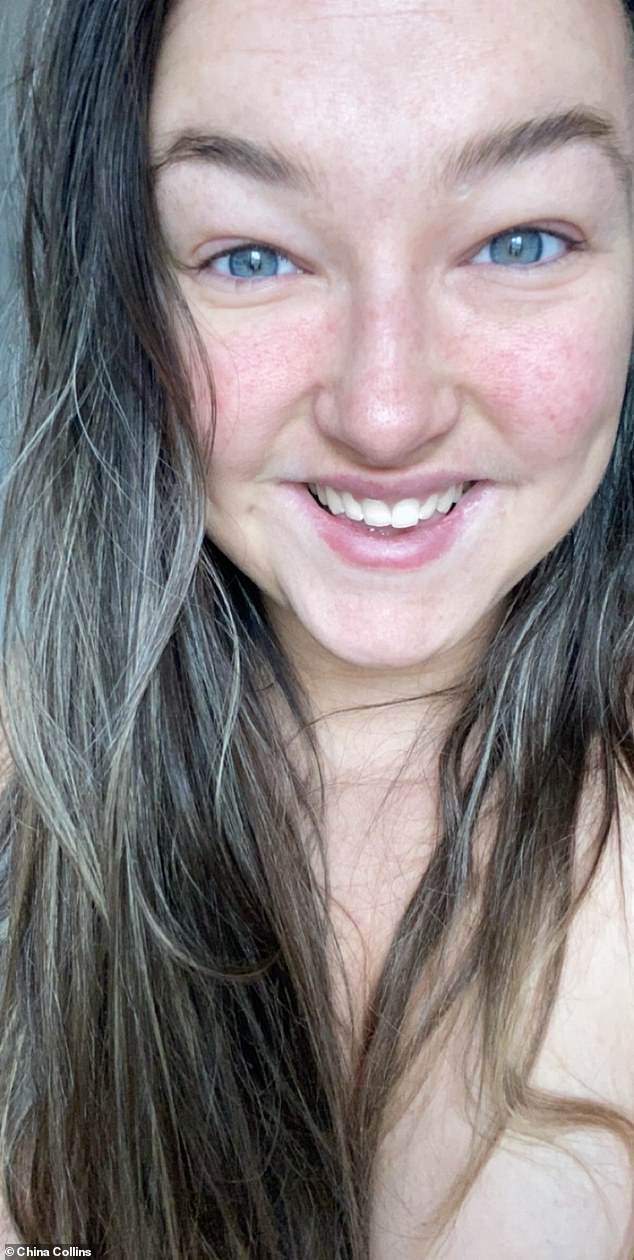 When nothing that she was trying or that the doctor had given her was working, China went to her sister for skincare advice. Pictured, China after applying the cream in April 2020 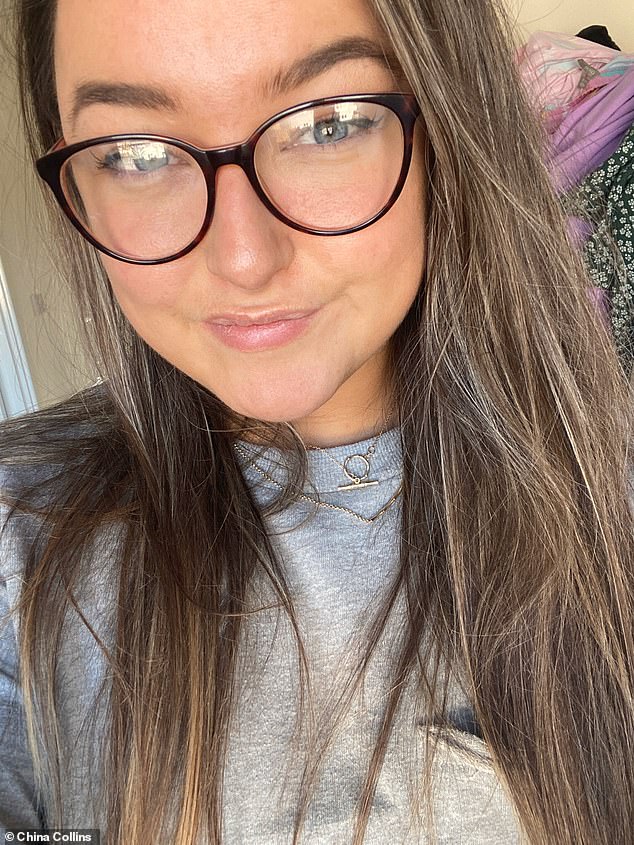 China now says she is the most confident she has ever been in herself and her skin in several years. Pictured, after applying the cream in April 2020

‘The creamy wipe-off cleanser was a big change for me as you don’t use water with it at all,’ she said. ‘It was unlike any wipe-off cleanser I have used before in that it was so thick and creamy. It felt super nourishing and moisturising on my skin.

‘The daily SPF treatment cream was one of the nicest I have used and it worked under make-up too, which is important for me.

Since starting to use the product, China claims her redness has almost completely disappeared – even after getting out of the shower when her face would almost always flush.

She added: ‘Currently I am the most confident I have been in myself and my skin in several years because now I have finally found a skincare regime that works; I know I have some control over it. I have lost that feeling of helplessness. It’s very liberating.’

END_OF_DOCUMENT_TOKEN_TO_BE_REPLACED

END_OF_DOCUMENT_TOKEN_TO_BE_REPLACED
This website uses cookies to improve your user experience and to provide you with advertisements that are relevant to your interests. By continuing to browse the site you are agreeing to our use of cookies.Ok