Incredible moment a Russian YouTuber attempts to set off the ‘biggest Coca-Cola chemical eruption ever’ using 10,000 litres of pop and a huge pile of baking soda

A Russian YouTuber has revived the evergreen viral trend of making Coke explode and taken it to the extreme, with 10,000 litres of the drink.

Popular vlogger Maxim Monakhov, known as Mamix, recorded the moment an almighty soda geyser is produced after the pop is mixed with baking soda.

The video, posted on Friday, has already amassed more than six million views. 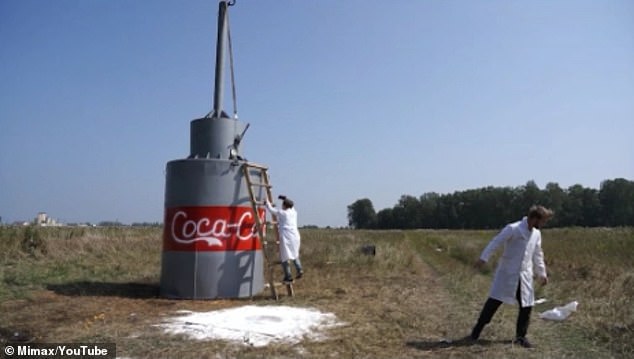 Popular vlogger Maxim Monakhov, known as Mamix, recorded the moment an almighty soda geyser is produced after Coke is mixed with baking soda 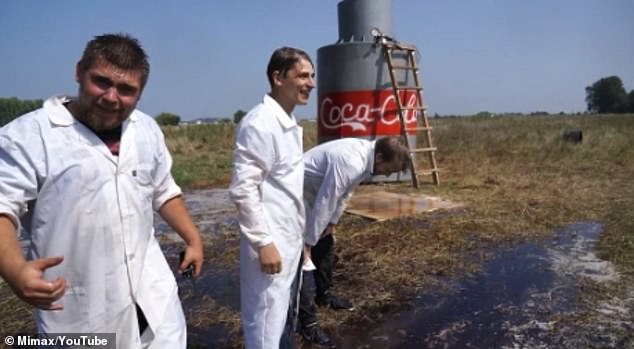 A Russian YouTuber has revived the evergreen viral trend of making Coke explode and taken it to the extreme, with 10,000 litres of the drink

In a field, away from anything or anyone who might complain, the team set up their experiment.

In the video, thousands of litres of Coke are poured from commercial bottles into a custom-built vat which is pressurised and sturdily built.

This chemical reaction is fundamentally different to the physical reaction triggered by Mentos sweets – which are often used to create a similar effect.

Mimax opted for baking soda over Mentos because it is cheaper and more effective, he says.

Mimax and his team effectively ramped up a popular school experiment which has been around for decades – vinegar and baking soda.

One element of the reaction is acidic (Coke or vinegar) while the baking soda acts as a base.

Hydrogen from the acidic liquid reacts with the carbonate to produce hydrogen carbonate, an intermediate compound.

This then almost instantaneously breaks down into carbon dioxide and water. It is the CO2 which leads to the eruption.

Although the reaction demonstrated in the video is different to the famous Mentos experiment, the end result is roughly the same and the video shows the enormous plume of Coke.

Mentos and Coke, when mixed, produce a physical reaction which unleashes the carbon dioxide already in the beverage – it does not create extra gas.

Normally, a bottle of Coke has carbon dioxide trapped not as a gas but as a solution – held in place by bonds with water.

When a bottle or can is opened, poured or breached, some of these bonds are broken and gas is released, producing a slightly foamy head as the CO2 transitions from being in solution to being a pure gas. 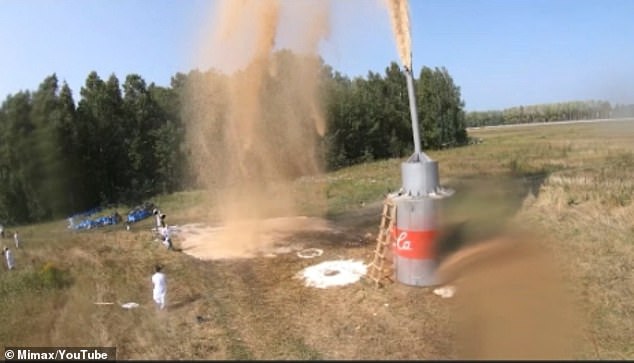 The experiment is different to the viral Mentos experiment. Mentos triggers a physical reaction whereas the baking soda causes a chemical experiment 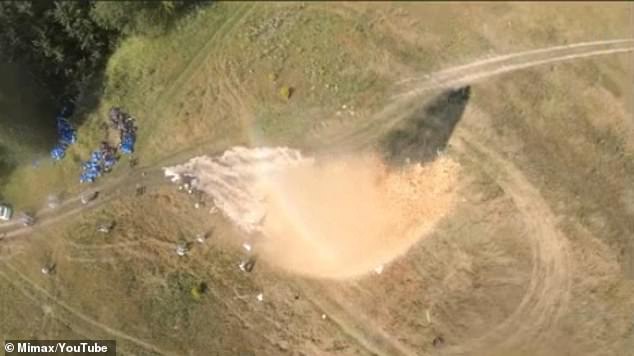 Although the mechanism to the experiment is different to a true Mentos experiment, the end result is roughly the same and the video shows the enormous plume of Coke created by the chemical reaction

There are 12 grams of CO2 in solution in a single 2L bottle of coke, and this naturally occupies a space of six litres when in gaseous form.

But normally this simply does not happen, as it takes a specific process called bubble nucleation to switch the trapped carbon dioxide from tamed solution to violent gas.

This process is kickstarted by Mentos candies because the rough surface of the sweet provides tiny cavities up to 7 micrometres in size, which are too small to get wet due to the surface tension of the water.

They provide locations for the gas to latch on to which allows the CO2 to break its bonds with the water and interact with itself, flipping the switch on the drink’s untapped potential.