S.L Lim the first non-binary writer up for Stella Prize since entry changes

Novelist S.L. Lim has become the first non-binary writer to be in contention for one of Australia’s most important literary awards since changes were made to the eligibility requirements of the $50,000 Stella Prize for women’s writing.

But Lim, who made the longlist with second novel Revenge: Murder in Three Parts, played down the significance of the inclusion which comes after the award changed entry guidelines to include all women-identifying and non-binary writers in 2019.

Lim said they did not see their achievement as a milestone because the inclusion of non-binary and trans women in the prize was simply a necessary correction of a harmful prejudice. It was only noteworthy, they said, because the “standard of human being in the world is so incredibly low that not being a TERF [trans-exclusionary radical feminist] is something we need to feel gratitude for”. 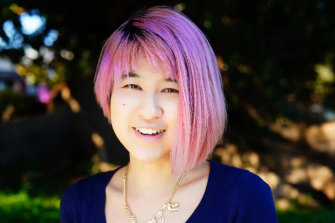 Lim’s comments reflect the ongoing tension between supporters of trans and non-binary rights and “gender critical” feminists – known by their opponents as TERFs – who challenge the idea that gender identity is more relevant than biological sex. Non-binary means that a person does not identify exclusively as either male or female.

The Stella Prize eligibility guidelines were adjusted in August 2019 to reflect the organisation’s position that gender identity is not reducible to the body and that “what it means to be a woman is not static”.

“Regarding eligibility for the Stella Prize, we welcome authors who identify with Stella’s mission to celebrate Australian women’s writing in ways that reconcile with their understanding of their own gender identity. This includes trans women, non-binary and cis women writers,” the organisation said in a statement on gender posted to its website.

The organisation said it had consulted with authors, publishers, peers and gender equality advocates in developing the statement and expanding the entry guidelines. Entrants do not require any statement of gender identity beyond their own self-identification.

Taking writer Miles Franklin’s first name, The Stella Prize was founded in 2012 to promote Australian women’s writing and to counter the under-representation of women as winners of literary prizes.

It is now one of most recognisable and important literary awards in Australia – one that translates to book sales – and has been won by writers including Alexis Wright, Charlotte Wood, Heather Rose and, last year, Jess Hill for her ground-breaking examination of of domestic abuse See What You Made Me Do.

Executive director Jaclyn Booton said the prize sought to champion cultural change and it would fail its own mission if it reinforced gender binaries.

“Stella has always been motivated by the questions of whose voices aren’t being heard and how do we increase the reach and readership for great Australian writers. Women writers are the core of our activity. We know that gender identity isn’t static. I think its really critical that non-binary writers are part of that conversation,” Booton said.

Eligibility requirements for women’s prizes have been contentious in recent years as organisations have been forced to grapple with definitions of the word “woman” and concepts of gender identity and biological sex.

Non-binary trans writer Akwaeke Emezi last year said they would boycott the prestigious Women’s Prize for Fiction, established in Britain in 1996 in response to gender bias in the Booker Prize, after it asked entrants for their sex as defined “by law” and equated “woman” with “a cis woman, a transgender woman or anyone who is legally defined as a woman or of the female sex”. A major new North American prize worth $150,000 was established last year to recognise women and non-binary authors.

Lim said it was a waste of their time to engage with those – including the likes of J.K. Rowling – who argue that trans and non-binary activism has eroded the concept of “woman”.

It was important, Lim said, to recognise that prize nominations were not what caused broader social change. Lim also noted the limitations of prizes such as the Stella, pointing out that it was named after Miles Franklin, who has become a contentious figure since historian David Bird highlighted her links with Nazi sympathisers.

“The Stella Prize has aspirations towards a certain kind of cultural change which are broadly positive but it’s also named after a fascist and I certainly haven’t forgotten that and I think others have not forgotten that either,” Lim said.

“There is value in these formal avenues of recognition reflecting and amplifying movements that occur elsewhere but I think we need to be very, very clear about the direction of causation – that it is the broader social and material movement which cause what progress there is and to change the prize is the end point, not the beginning.”

This year’s longlist of 12 is notable for its diversity of authors and genres, spanning five debut authors and a Miles Franklin winner – Evie Wyld – as well as short stories, a novel in a translation, personal essays and a young adult book. The shortlist will be announced on March 25, with the winner revealed on April 22.