On Monday night’s episode of The Bachelor: The Greatest Seasons Ever! Sarah told host Chris Harrison that their wedding plans have been paused. “No plans as of right now. We’ve put all planning on hold,” she said. “All of my family is mostly on the East Coast, so for them to fly out… and just ages and of course with my health risks, we want to be as safe as possible.” Sarah suffers from kidney dysplasia, which means she’s immunocompromised and is at a higher risk for severe illness if she were to contract COVID-19.

“There are no wedding plans,” Wells also told Access Hollywood in May, in an interview about how the engaged couple has been self-quarantining amid the COVID-19 pandemic. “I think the thought was that we’d originally start thinking about that around this time and now that this is happening, what’s the point ofeven trying to get something solidified with everything being up in the air?”

When asked if the couple would ever consider doing a Zoom wedding, Wells gave a resounding nope. “If it lasts really really long, I think we would do a really small backyard thing but that’s probably not going to happen. There’s too many famous ABC personalities that need to give us gifts. Ty Burrell, I need a new fly-fishing rod, and Chris Harrison, I need some crystal.”

While the wedding is on hold for the foreseeable future, Sarah and Wells’ love story is one for the ages. How did they meet and fall in love? Here’s the couple’s full relationship timeline over the past three years:

The couple began trading flirty tweets during Wells’ gig as the bartender on Bachelor in Paradise, according to People. But Sarah had been pretty open about her hard-core crush on Wells since the second she saw him on JoJo Fletcher’s season of The Bachelorette in 2016.

Of their interaction, Wells told the publication: “The internet—it’s amazing. I’m amazed how smart the internet is. Because I just assume everyone on Twitter is an idiot, and then I’m like, ‘Wow!'”

But social media flirting didn’t immediately turn into a relationship IRL. At the time, Wells, host of Your Favorite Thing podcast with Brandi Cyrus (Miley’s sister), was living in Nashville, and Sarah, who most notably starred in Modern Family, was in Los Angeles.

October 29, 2017: Things got ~serious~ with a couples Halloween costume.

The couple first sparked rumors around Halloween when Sarah posted an Instagram of their “couples” costume, based on the Netflix show Stranger Things (Sarah dressed as Dustin Henderson and Wells went as Eleven).

Check out this vid detailing exactly how the cute duo became Instagram official:

January 2018: Sarah told Jimmy Kimmel how she and Wells connected.

Sarah went on Jimmy Kimmel Live and shared exactly how their relationship progressed from Twitter flirtation to IRL dating.

The actress shared: “Have you seen those memes of ‘Slide Into the DMs’? That. He slid into my DMs.” The bold move worked. “I was single, obviously, and was like, ‘This is really awesome. You’re being very forward and it’s sexy and not aggressive, but very confident and sexy,’ and I liked that.”

August 2018: Sarah and Wells moved in together.

After nearly a year of dating, Wells relocated from Nashville to Los Angeles to be with Sarah. 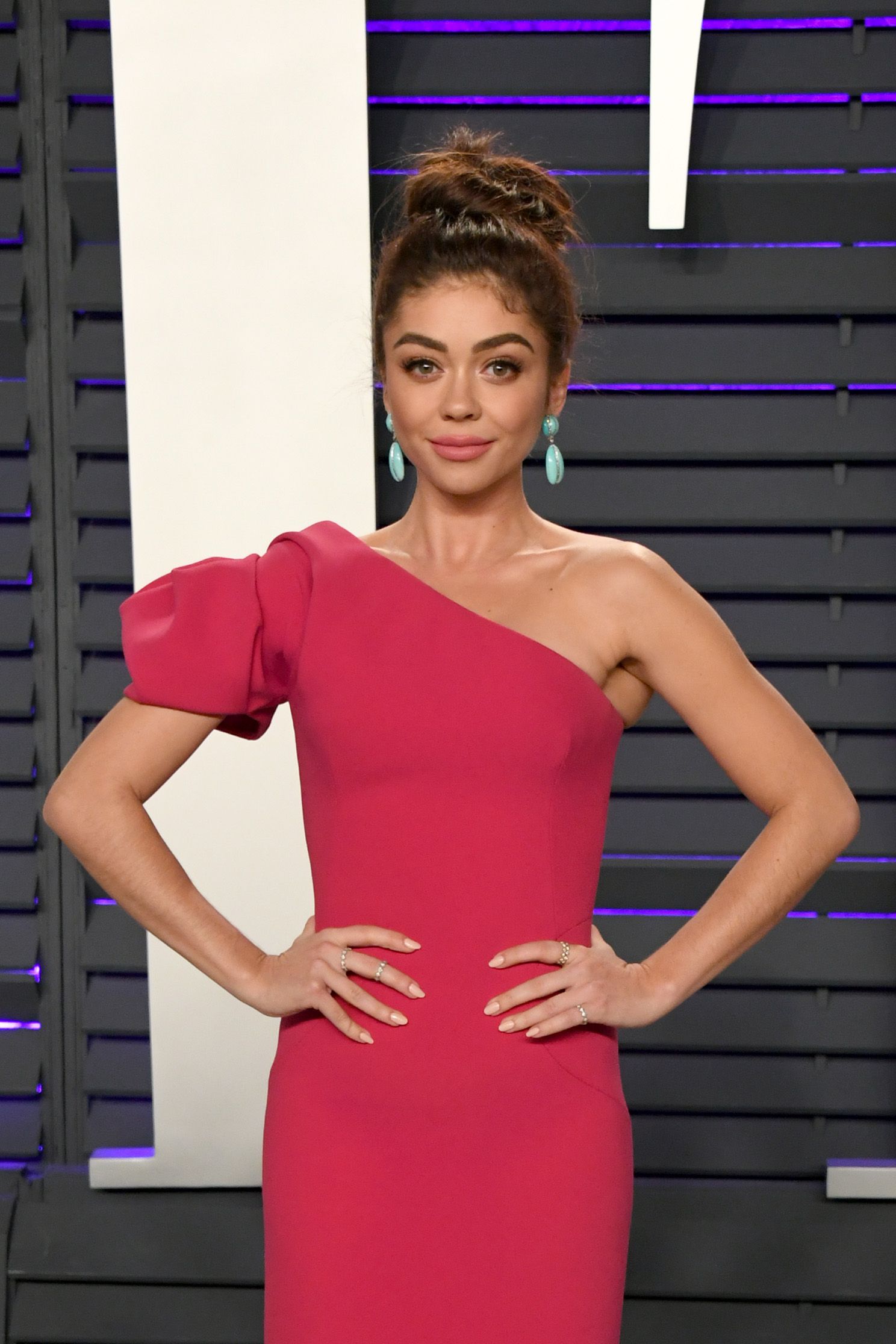 Sarah has been super open about her health battles with kidney dysplasia, including multiple surgeries and two separate kidney transplants. Wells has been by her side through it all.

He told US Weekly: “Imagine having a vital organ replaced. Imagine having 16 surgeries, going to hundreds of doctors visits and taking thousands of pills. Imagine losing crazy weight because of dialysis, medication side effects and stress. Then imagine, having to do it all over again. This time keeping it quiet while you recovered, all while trolls on the internet judged you for your appearance. Oh, and throw in filming the funniest show on TV and executive producing and starring in a movie … and never breaking down. Never losing it. I know Gal Gadot is Wonder Woman on film, but Sarah is the real-life version.”

July 16, 2019: Wells and Sarah announced their engagement on Instagram.

Perhaps inspired by all the love on Bachelor in Paradise, Wells popped the question on the beach during a vacation in Fiji. Both fiancés shared the good news on their respective Instagram accounts, and tbh, their captions couldn’t be cuter.

“That can’t eat, can’t sleep, reach for the stars, over the fence, world series kind of stuff ✨❤️ @wellsadams,” Sarah wrote, referencing a line from the #iconic ’90s film It Takes Two (starring Mary-Kate and Ashley, just in case you forgot).

Not to be outdone, Wells said, “I’ll be Johnny, you be June. But forever. 🎶- Drew Holcomb & The Neighbors.”

October 27, 2019: They threw a themed engagement party with all their friends.

Sarah shared all the adorable snaps from Bordeaux and Paris, proving Wells has honed his #Instagramhusband skills during their engagement.

Of course, Wells got out from behind the camera for more hilarious couples pics, and even better banter in the comments. Wells commented: “I’m having mimosas watching football in the living room right now, come downstairs and have 7 with me.”

On March 27, Sarah posted a sweet video on Instagram with Wells answering tons of questions about their relationship in the viral #coupleschallenge. Fans learned that Wells initiated their first kiss, and that Sarah is more stubborn.

“The very poor man’s @jlo & @arod 💍,” she captioned the post, an ode to the engaged celeb couple that inspired Sarah and Wells to do the video, too.

Sarah also used an electric razor to give Wells a haircut that was documented on the couple’s Instagram Stories, which turned out pretty well even though Sarah had never attempted to cut a guy’s hair before.

“She did a pretty good job,” he said after she finished.

April 2020: Sarah opened up about their love story with Cosmopolitan.

The May 2020 cover star of Cosmo, Sarah shared with the publication more details about how their relationship began. She revealed that they went on all of two dates before she had to undergo her second kidney transplant, but Wells flew from Nashville to L.A. to see her on weekends while she was in recovery, even though all her family was there. And she says a month into dating, they told each other they were falling in love.

“I asked him when he was going to ask me to be his girlfriend,” she said. “I’m impatient.”

Now, they’re total partners and planning for the future.

Wells and Sarah are pet parents of three dogs, and see multiple children in their future as well. “I’m the youngest of five, so I would love to have kids, and I’d like to have more than one,” Wells told US Weekly. “I’m older, I’m mid-thirties, but she’s still in her twenties, so I don’t think we’re there yet. But I think it’ll be a thing that eventually happens for sure.”

Speaking of their wedding, it’s still unclear when Sarah and Wells will tie the knot.

Wells told Brandi Cyrus shortly after the engagement, “It will be, like, well over a year. I mean, we haven’t figured out anything, you know? Phase one was just, like, get engaged. We’re still in phase one.”

Wells also confirmed to E! News that Bachelor host Chris Harrison did offer to officiate, but Wells turned him down. “I want him to just have fun and have a good time and not have to be burned by any of that stuff,” he explained. “He was nice enough to offer, but I wouldn’t do that. He’s my friend. I don’t want him to have to work at my wedding.”

END_OF_DOCUMENT_TOKEN_TO_BE_REPLACED

END_OF_DOCUMENT_TOKEN_TO_BE_REPLACED
This website uses cookies to improve your user experience and to provide you with advertisements that are relevant to your interests. By continuing to browse the site you are agreeing to our use of cookies.Ok