A mother has revealed how she created a DIY sensory den so her visually impaired daughter has somewhere to relax away from the ‘madness’ of the family home.

Kirstie Dallas, 27, lives in Belfast with her son Carter, five, and four-year-old Esmé, who has severe Cerebral Visual Impairment (CVI), which is a form of visual impairment caused by the brain not being able to process information from the eyes passing along the visual pathways to the brain.

‘She’s registered blind, as even though her eyes are perfectly healthy, her brain is not,’ explained Kirstie. Esmé’s condition is due to a rare neurological genetic disorder called pontocerebellar hypoplasia.

‘It is a life-limiting disease that affects around 100 children in the world, and there is no cure,’ said Kirstie, speaking to money-saving community LatestDeals.co.uk. ‘She has always been tube-fed, and is hooked up to an oxygen saturation and heart rate monitor around the clock. 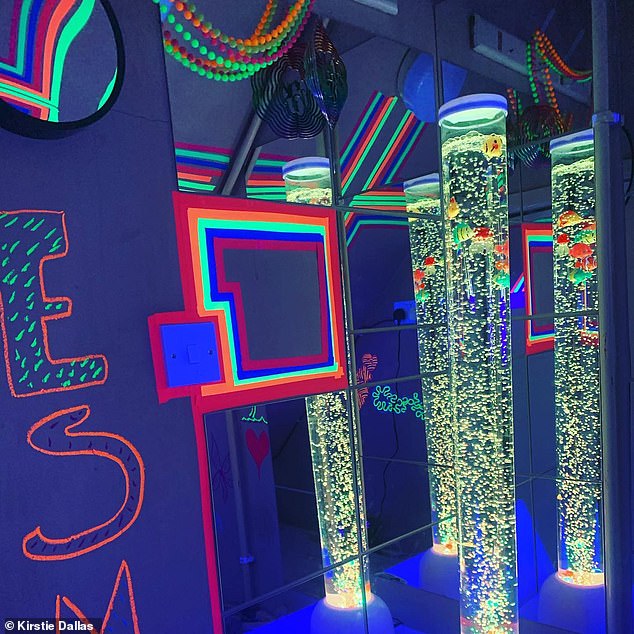 Kirstie Dallas, 27, from Belfast, has revealed how she created an at-home sensory den (pictured) for her visually impaired daughter for £300 – and it took just four days 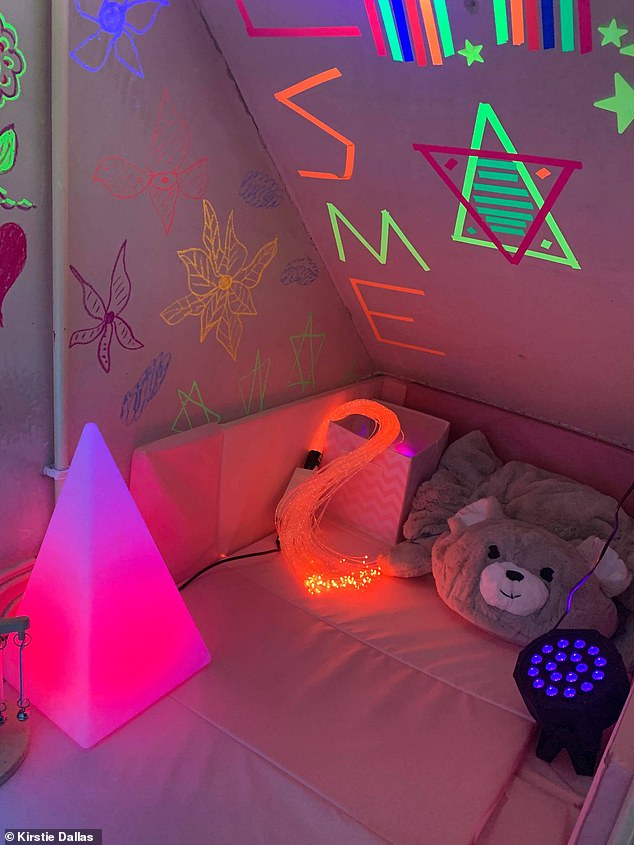 Kirstie wanted her daughter to have her own space to chill away from the background noise of the madness that’s always going on in her house. Pictured, the sensory room 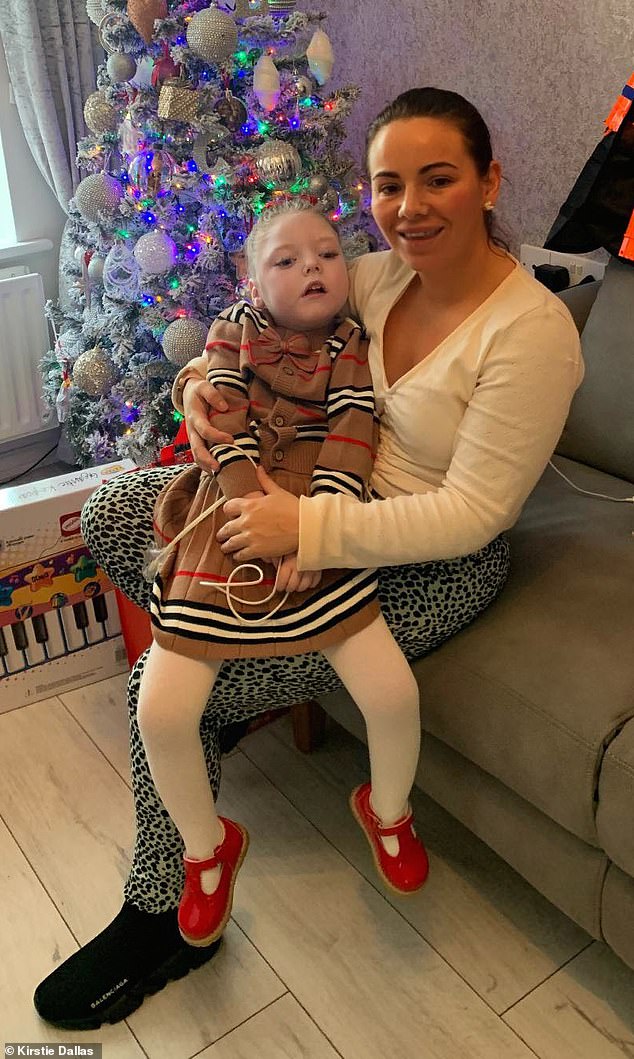 Esmé (pictured, with Kirstie), four, has severe Cerebral Visual Impairment (CVI), which is a form of visual impairment caused by the brain not being able to process information from the eyes passing along the visual pathways to the brain

‘On top of this, she has epilepsy, dystonia, microcephaly, and global developmental delay. She uses oxygen day and night, needs a suction machine to control her saliva and is prone to upper respiratory infections. We were told that she wouldn’t live to age two, but Esmé is now four years old.’

‘Our lives changed when Esmé came along,’ Kirstie said. ‘We keep her well shielded from viruses, so our lives are pretty similar to the way that everyone lives now.

‘The pandemic didn’t change our routine much. We have lived like that from January 2017, trying to be careful. However, the way her condition impacts us as a family can be a bit overwhelming at times, as she requires around-the-clock care and I’m so fussy about how she is looked after.’

Kirstie had been thinking of adding a sensory den to the house for some time.

‘I wanted Esmé to have her own space to chill away from the background noise of the madness that’s always going on in my house,’ she explained. ‘Her big brother likes to make a bit of mess, as most boys his age do.’ 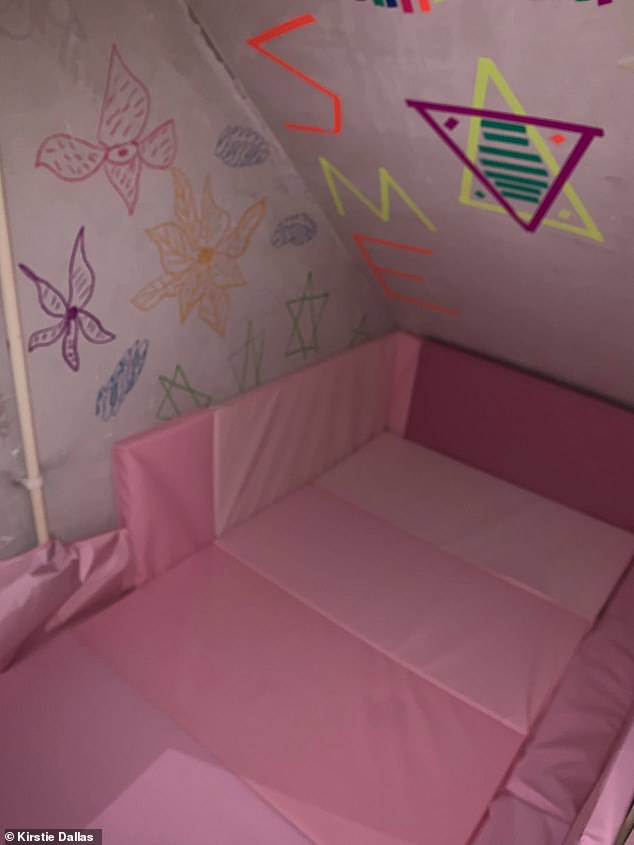 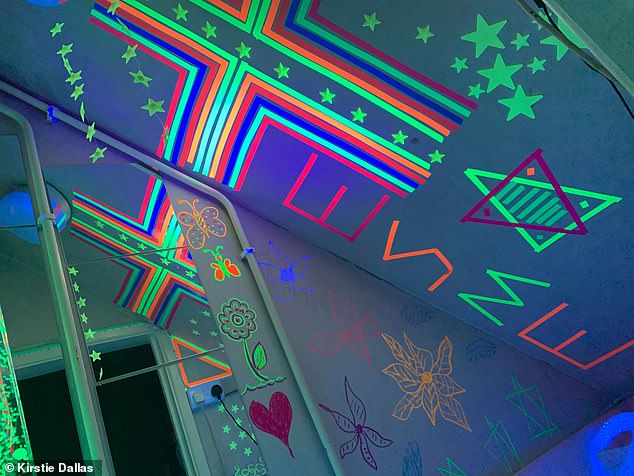 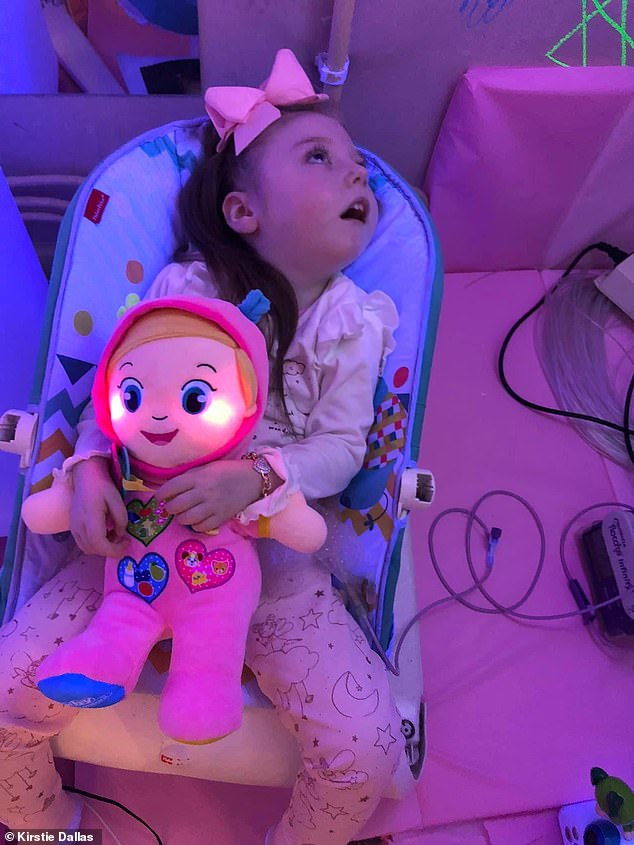 Esmé’s condition is due to a rare neurological genetic disorder called pontocerebellar hypoplasia. Pictured, in her new sensory room

A fundraising event helped Kirstie to raise enough money to fund it.

‘Originally, we had an idea to buy a shed and decorate it, but it was never the right time,’ she said. ‘Esmé always ended up unwell, or it was too cold to work on it. Still, over time I had been busy collecting all the items I wanted to add.

‘After Boxing Day 2020, I was fed up looking at the mess underneath my stairs and I thought that I could use that wasted space for the den.’

It took Kirstie just four hours from start to finish and cost around £300 in total.

‘The main consideration I had when creating the room was for it not to be too busy, as that would be sensory overload,’ she said. ‘I knew exactly what I wanted in it, as I know what Esmé does and doesn’t like. Also, the lighting was of the utmost importance.

‘Firstly, I removed all the clutter from underneath the stairs. Next, I laid the carpet using an off-cut that was leftover from carpeting my stairs a few months ago. I put foam mats from IKEA, which cost £22 each, over the top of the carpet and I also placed them on the walls, cutting them as needed to make them fit. 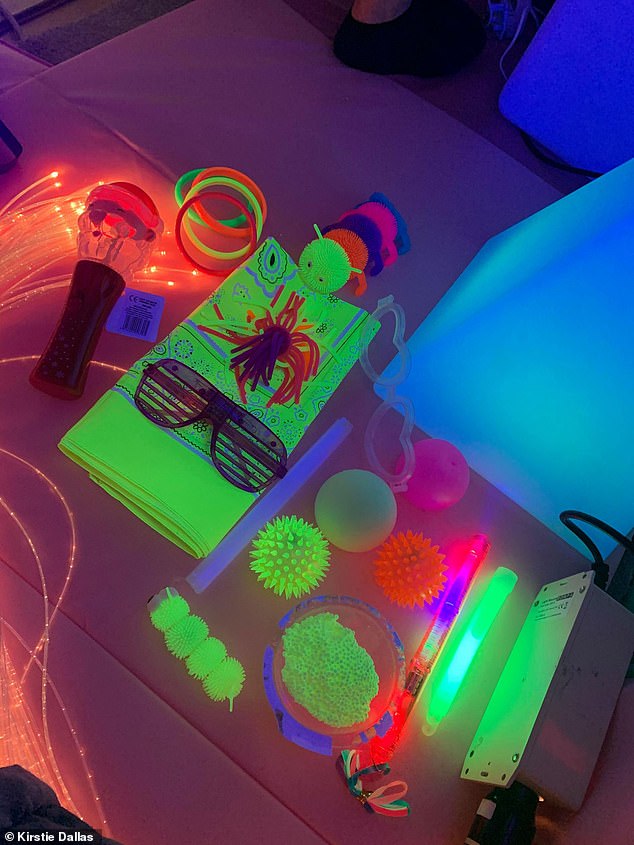 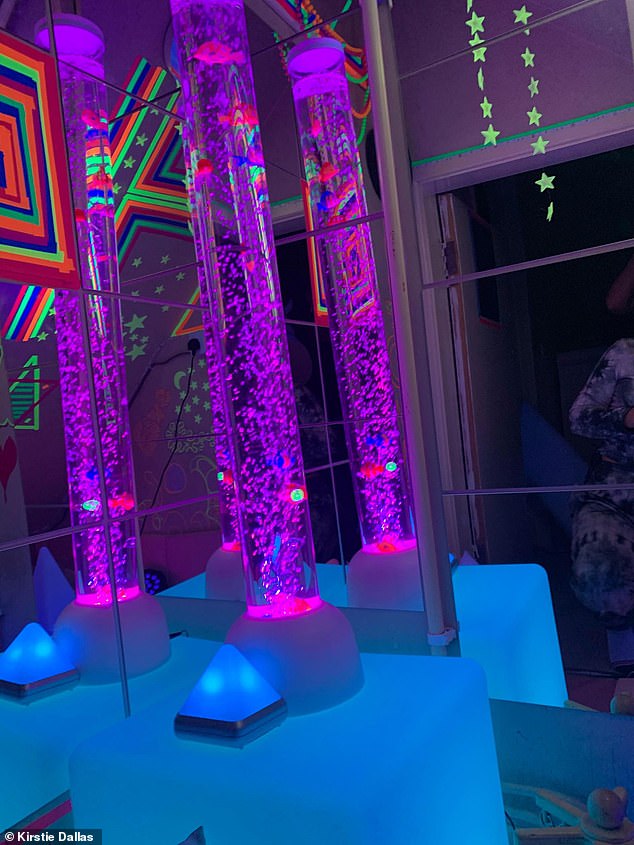 The mirrors cost £4 for four from IKEA and are fixed to the wall with the self-adhesive strips they come with, while the bubble tubes can be found in Asda, Argos and The Range (pictured)

‘The mirrors cost £4 for four from IKEA and are fixed to the wall with the self-adhesive strips they come with.

‘The two mood tubes are from Learning Space and cost between £70 and £120. I then added the bubble tube – you can find these in Asda, Argos, The Range.

She continued: ‘I put the bubble tube on top of the mood light to create extra height so that Esmé could see it. I positioned it in the corner where I put the mirrors so that when it’s illuminated the reflection makes it appear brighter and makes the space look bigger too. ‘

Kirstie also bought a UV lamp for £50 from Amazon, which came with UV crayons that she used to make some doodles on the walls.

She also bought UV strips from Amazon (£12 for 12 pieces), fashioning some of them into a bespoke design for the ceiling. She then added UV stars and moons for an extra touch (from Leaning Space for £4.99 and £6.99 respectively). 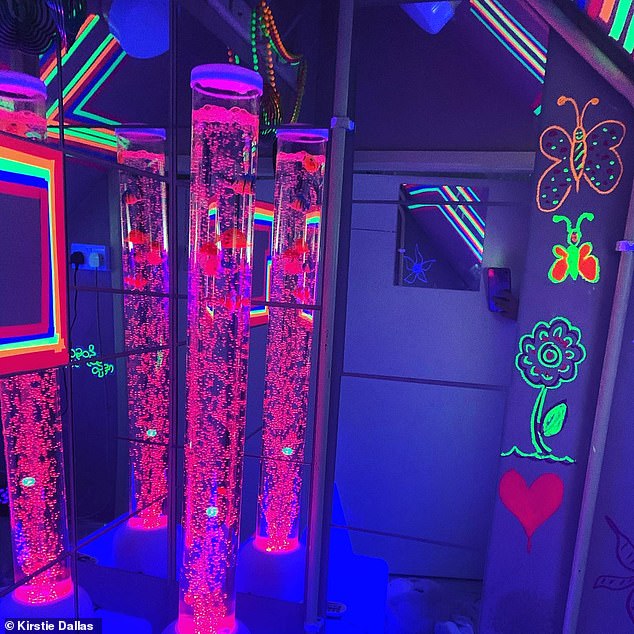 Kirstie also bought a UV lamp for £50 from Amazon, which came with UV crayons that she used to make some doodles on the walls (pictured)

For the cosy corner, she placed a large, roll-up fluffy sleeping bag, which can be easily tidied away.

‘All of the UV toys are from Louise’s Sensory Boxes, which is run by a friend of mine who’s also a special needs mum. She really knows her stuff,’ said Kirstie, who is thrilled with the end result.

‘The sensory den looks better than I could have imagined. I absolutely love everything about it,’ she continued.

‘It’s all I’ve ever wanted for Esmé, as she can’t get joy out of many of the usual things that four year olds play. She loves spending time in there and relaxing to the theme song from Frozen.

What is Cerebral Visual Impairment?

‘Cerebral visual impairment is the name for problems with vision that stem from the brain rather than the eye.

Our eyes turn light from the world around us into electrical signals.

The signals are sent along connections between nerve cells (‘the white matter’) to many different areas in the brain (the cerebrum).

The visual brain uses these signals to piece together different aspects of what we see. It works out what an object is, where it is, whether it’s moving or whether we’ve seen it before.

Damage to the visual brain and its connections (the visual pathway) leads to different problems depending on where it is.

For example, someone with cerebral visual impairment might not be able to see anything in the top left of the view ahead, or might have trouble recognising faces.’

‘She is so calm in the den that she can sit there for hours. Plus, it’s great for her visual, auditory and tactile processing, as well as fine and gross motor skills.

‘She doesn’t like too much going on at any one time, so I would only have her strip light and bubble tube on at once. After that, I may turn on the UV light with the mood light and music.

Kirstie shared the photos of her project to a budget DIY group on social media and has been bowled over by the response. The post inspired a flurry of activity, with 17k reactions and 1.4k comments.

‘I was absolutely gob smacked by the reaction on Facebook,’ she explained. ‘I loved reading all the comments and I feel proud of what I had achieved.

‘It has also helped to educate a few people about blindness, as most people think being blind means that you have totally no sight, but this isn’t always the case.

‘I’m not an artsy person but when it comes to doing something for my children I can put my mind to anything. I wanted her to have somewhere at home to call her own – a personalised space that’s for just her.

‘If you are a parent of a child with visual impairment and would like to make a similar sensory room, I would advise you to sit down and draw up a budget and go from there.

‘A den like this can be achieved for next to nothing. Products especially for visually impaired children can be 10 times the normal price, but you can find lots of items that are suitable for a sensory room from high-street stores, such as Home Bargains, B&M and Argos.’

‘I am currently on furlough but I don’t think that I will be able to return full-time after lockdown as Esmé’s condition is worsening so it’s difficult for me to be at work. Maybe I will turn my hand to doing something else, like making sensory rooms.’

Tom Church, Co-Founder of LatestDeals.co.uk commented: ‘Kirstie has done a fantastic job creating this amazing sensory den for her daughter.

‘It’s great that she was able to find suitable buys from affordable shops on the high-street. If Kirstie does decide to offer her services to others, we wish her every success.’