With kids back to school in person, U.S. schools districts are once again searching for methods to prevent school shootings.

This month, a student was suspected of opening fire at Timberview High School in Arlington, Texas. Timothy Simpkins allegedly shot and injured four people, Fox News previously reported. He is expected to be charged with three counts of aggravated assault with a deadly weapon.

In response to such incidents, districts are requiring students to use clear backpacks so school officials can see inside, though there is some debate about the effectiveness.

“It would depend on what other practices are in place,” Canady told Fox. “Just because a backpack’s clear doesn’t mean something can’t be hidden. “Policymakers have got to be really careful about not unintentionally … creating kind of a false sense of security.”

Since Aug. 1, there have been 16 school shootings, according to Education Week, an education-focused news organization.

This year, there have been 24 school shootings, the outlet reported, with 34 people injured and six – including four students or other children – killed. 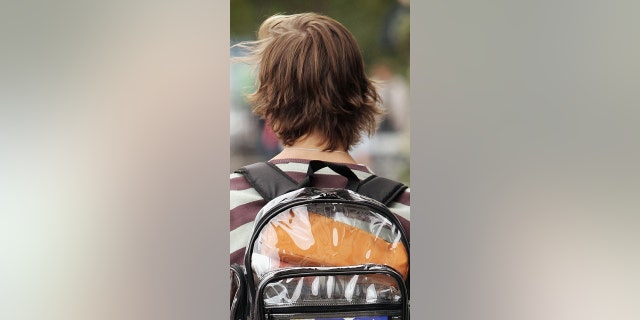 A transparent backpack is carried on Aug. 26, 2005, in London, England. (Photo by Peter Macdiarmid/Getty Images)

School shootings were at an all-time low in 2020 because of the COVID-19 pandemic and remote learning in many districts across the U.S. According to Education Week, there were 10 school shootings last year, compared with 25 in 2019 and 24 in 2018.

“Even though a backpack’s clear, things can still be hidden in it. If you really want to know what’s in those clear backpacks … you’ve still got to do a search.”

However, gun violence is still happening despite some schools’ clear backpack requirements.

On Sept. 30, a 6-year-old boy at Newton Elementary School in Newton, Mississippi, was shot in the leg by another student who brought the gun to school in a mesh backpack, Newton Police Chief Randy Patrick confirmed to Fox News.

According to Patrick, the student brought the gun to school and took it out of the bag to play with when it discharged and the 6-year-old was shot.

Though Patrick could not confirm whether or not the Newton Municipal School District (NMSD) requires students to use only clear or mesh backpacks, local outlet WTOK reported that the district only allows clear backpacks on school grounds.

Fox News has requested comment from the family of the student who was shot.

“Even though a backpack’s clear, things can still be hidden in it,” Canady told Fox. “If you really want to know what’s in those clear backpacks … you’ve still got to do a search.”

“Students put a lot of stuff in those backpacks,” Canady added. “Let’s say you see gym clothes in there. Well, who’s to say there’s not a weapon wrapped in those gym clothes?” 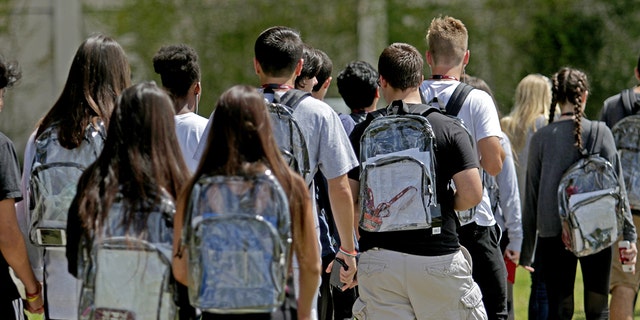 Schools are trying other methods to keep their students safe.

The individual was identified and students were able to return to in-person classes after the holiday weekend, Fox News reported.

Jefferson School District decided to switch from banning backpacks to allowing only clear backpacks. Savannah said clear backpacks were provided to her and her fellow students last week.

Savannah and her mother both clarified that the videos weren’t intended to make any kind of statement about the backpack ban.

“This wasn’t a political statement or anything for or against what our superintendent chose, the school board chose to do,” Debbie Bagley said.

Savannah added: “It was just to make light of the situation.”

Seth Bagley chimed in, saying his daughter’s video may have even helped others, in a way.

“Our community was kind of fighting a lot and I felt like this diffused a lot of the mean comments and it kind of turned a negative into a positive,” Seth said. “For that reason, I’m proud of Savannah.”

In 2018, after the shooting at Marjory Stoneman Douglas High School in Parkland, Florida, school officials required students to use clear backpacks. On Friday, the shooter Nikolas Cruz was expected to plead guilty to all 17 counts of murder and 17 counts of attempted murder, Fox reported.

Now, other schools are implementing clear backpack policies this year.

“We can create a false sense of security if we’re not careful.”

Branchville High School in South Carolina posted on Facebook in September about its clear backpack requirements, saying that students would be able to get clear backpacks from the school itself.

Canady told Fox News that in order to truly make schools safer, there has to be a “multi-layered approach,” which includes school resource officers and other safety measures. Simply requiring clear backpacks – or even metal detectors – isn’t enough, he said.

“It depends on, ‘is the rest of your perimeter secure?’ It’s one thing to have everyone walk through a metal detector at the front door,” Canady said. “But what about the 150 perimeter doors that can usually be opened from the inside by anyone? They really have to be for … fire codes. So, we can create a false sense of security if we’re not careful.”

Even though it may be a complicated issue, Canady said he doesn’t want to “discourage policymakers around the clear backpacks.”

“But it’s got to be more than just we’ve got clear backpacks,” he said. “There has to be a lot more around that.”

Canady said that in 2002, when he was working as a school resource officer, there was a murder at the school. After the incident, a parent approached him and asked him a question.

“They said, ‘Can you or anyone else guarantee my child’s safety at school?’” Canady recalled. “My answer is no – there are no guarantees.”

“But there are a number of steps that we can take – layered approaches that can reduce the probability of that happening,” he added. “There are so many moving parts within the school safety and security world, that just saying one thing is going to do it … it’s not true, and it’s a really dangerous place for us to try to go.”