Prime Minister Scott Morrison says next week's budget will be the most important since the end of World War II.

Morrison and his Treasurer Josh Frydenberg face kickstarting an economy deliberately shutdown in a war against the coronavirus. 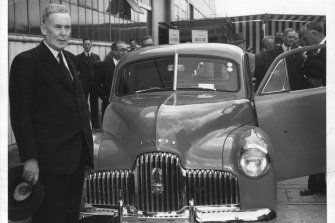 Ben Chifley, left, released the 1945 budget just days after the end of World War II. Four years later, he was on hand to see the first Australian-made car roll off the Holden assembly line in Melbourne.

Ben Chifley, who held the twin jobs of prime minister and treasurer, had to re-build an economy – and a population – battered by actual war.

Amid complaints from the Liberal Party's Harold Holt that the budget was as "scientific as a meat pie", Chifley's challenges included bringing normalcy back to the economy, provide for those still reeling from the war while readying the country for a post-war expansion.

He set out the first move to create the Pharmaceutical Benefits Scheme (which was knocked down by the High Court after a challenge from the British Medical Association), dealt with the fallout from drought – dairy subsidies had skyrocketed over the previous year – while also making room to financially support those left exposed by the war.

The pension for widows with a child under the age of 16 was increased by 5 shillings, or more than 15 per cent, while widows without children received a slightly smaller but still substantial lift.

Chifley had his own problem with "new" media, chiding those who "waste their time sending telegrams" demanding a change in the products subject to sales tax.

The budget was presented just five days after the formal end of World War II, which had delivered a major economic shock that drove the country into recession.

But the Bathurst train driver had to engender confidence among the people of Australia.

"If we as a people can maintain, in the difficult years that lie immediately ahead, the courage and resolution which we displayed during six long years of war, we can look forward to great developments in this country," he said.

All this while announcing a budget deficit of £152 million. In today's dollars that is about $11 billion.

Seventy-five years later, the deficit to be unveiled by Frydenberg will dwarf that produced by Chifley. The starting point is likely to be $200 billion with another $100 billion in 2021-22.

But he faces similar challenges, the least of which is re-starting an economy that has suffered an immense shock in the form of the coronavirus pandemic. Consumers and businesses need a jolt of confidence, which itself is tied directly to the possible creation of a vaccine. 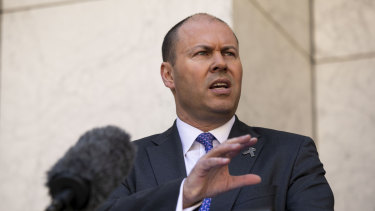 Josh Frydenberg’s expected budget deficit will dwarf that outlined by Ben Chifley in his 1945 budget.Credit:Dominic Lorrimer

The government has signalled a manufacturing-led recovery that will have to be underpinned by consumers getting their spending mojo back.

It was Ben Chifley on hand to see the first Australian-made Holden roll off the assembly line as Labor, and then Menzies' Liberal party, locked in a manufacturing renaissance.

Perhaps voters will soon be seeing Scott Morrison at an Australian car plant.