A manhunt for three people responsible for a deadly mass shooting outside a South Florida banquet hall has entered its third day with few clues released about the suspects.

The Miami-Dade Police Department on Monday released footage of the masked suspects exiting a stolen SUV outside the El Mula Banquet Hall near Hialeah just after midnight Sunday before opening fire indiscriminately into a crowd. The suspects, who police said were armed with semi-automatic rifles, then sped away, leaving two people dead and 21 others injured.

As of Monday, 13 of those injured remained hospitalized. Three of them were in critical condition, police said.

The white Nissan Pathfinder used by the suspects was later found submerged in a canal. The vehicle had been reported stolen on May 15, police said.

With still no arrests announced or suspects identified, a grieving father whose 26-year-old son was killed in the shooting interrupted a press conference conducted by local law enforcement on Monday to express his anger and heartbreak.

“You all killed my kid. You must burn!” the man identified as Clayton Dillard hollered before cameras after approaching the podium where the Miami-Dade Police Department’s director, Alfredo “Freddy” Ramirez III, was speaking.

“You hear me? You killed a good kid, for no reason!” he cried out. 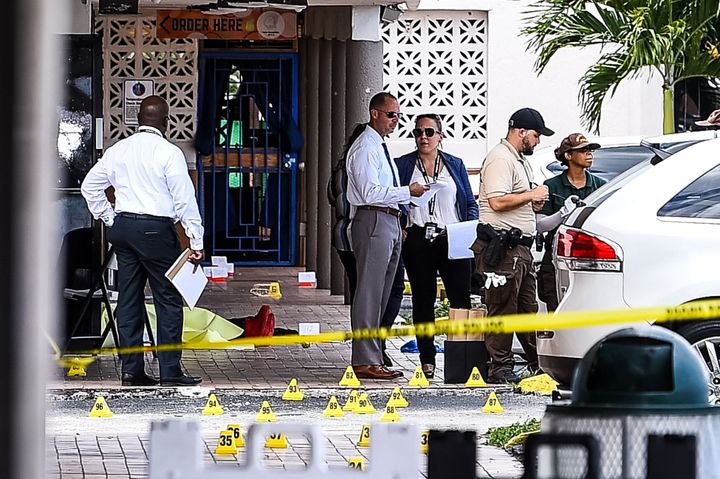 “That is the pain that affects our community, right there, right before you,” Ramirez said as Dillard was led away. “That’s why together, all of us, we must work harder to bring justice to these families who are crying as you hear right now.”

The banquet hall was hosting an album release party featuring performances from local rappers at the time of the attack. It’s believed that a dispute between two rival groups, stemming from things said in rap songs or on social media, ignited the violence and that the shooters’ intended target was in front of the establishment at the time of the attack, authorities said at Monday’s presser.

“These gun-violence-driven murderers, as it has been said eloquently before me, who are targeting individuals and at the same time hitting innocent people who have nothing to do with their beef, ruining families,” Ramirez said, just before being interrupted by Dillard.

A total reward of $160,000 is being offered for information leading to the arrest and conviction of those involved. The bulk of that money was offered by businessman and TV personality Marcus Lemonis, who called Miami his hometown.