Having previously won Oscars for Fargo and Three Billboards Outside Ebbing, Missouri, Frances McDormand, 63, has moved into elite company after winning two more Academy Awards on Monday, for producing and starring in Nomadland. 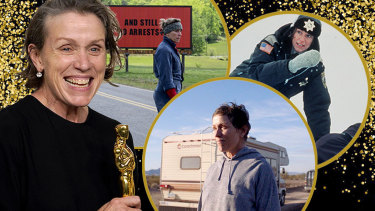 So what does McDormand do so well?

While a character actor for much of her career, McDormand has shone when in a lead role, bringing warmth, dignity, intelligence and truth to usually uncompromising ordinary folks. Mine worker, cop, cop’s wife, gift shop worker, gig economy worker.

Just to mix it up, she can also convince as a lesbian feminist women’s studies professor (Something’s Gotta Give) and director of national intelligence (Transformers: Dark of the Moon).

With an enormous list of films under her belt, some performances stand out. Here’s how we rank them.

Two FBI agents investigate the disappearance of three civil rights workers in Mississippi in a crime thriller directed by Alan Parker that was based on a real murder case in 1964.

McDormand played Mrs Pell, the hairdresser wife of deputy sheriff Pell (Brad Dourif), and the moral conscience in a confronting movie about racism.

“This whole thing is so ugly,” she says in the film. “Have you any idea what it’s like to live with all this? People look at us and only see bigots and racists. Hatred isn’t something you’re born with. It gets taught.

“At seven years of age, you get told it enough times, you believe it. You believe the hatred. You live it … you breathe it. You marry it.”

This is Charlize Theron’s movie as mine worker Josey, who takes a landmark sexual harassment class action lawsuit against her bosses, but McDormand shines as her best friend Glory Dodge.

In a drama directed by Niki Caro, set in Minnesota in 1989, Glory is a sassy mineworker with rough edges and strong principles. As the only woman on the union negotiating committee, she takes a no-nonsense, folksy approach.

She is struck down by Lou Gehrig’s disease and gets a showy scene but, in a wheelchair and unable to speak, she does it without saying a word. Passing a note to husband Kyle (Sean Bean), it reads: “My name is Glory Dodge and I’m not f—ing dead yet. I stand with Josey.“

In one of her most beloved roles,McDormand plays strong-willed college professor Elaine, who wants to protect her 15-year-old son who has gone on the road to write about rock stars in 1969.

It’s a fierce and funny performance in Cameron Crowe’s semi-autobiographical comic-drama, taking down the rock gods her son William (Patrick Fugit) and groupie Penny Lane (Kate Hudson) admire so much.

“This is not some apron-wearing mother you’re speaking with,” Elaine tells guitarist Russell (Billy Crudup) on the phone after he has unsuccessfully tried to charm her. “I know all about your valhalla of decadence and I shouldn’t have let him go. He’s not ready for your world of compromised values and diminished brain cells that you throw away like confetti. Am I speaking to you clearly?”

His reaction suggests that, yes, she has made her point very clearly.

In Martin McDonagh’s blackly comic crime drama, grieving mother Mildred serves it up to the town cops in Ebbing who have failed to find her daughter’s killer, by hiring three three billboards for a pointed message.

Wrapped up in her grief, bandana-wearing Mildred is fearless in her crusade to get justice from police chief Willoughby (Woody Harrelson) and racist deputy Dixon (Sam Rockwell) but there is humanity in there too.

McDormand took that directness to the Oscars stage when she won a second Oscar, calling for all the other women nominated in every category to stand. “Look around, everybody,” she said. “Because we all have stories to tell and projects we need financed.”

Widowed Fern takes to the road in a van after the closure of a gypsum plant in Empire, Nevada, in Zhao’s haunting tale about the economic, social and spiritual collapse of middle America.

In a touching performance, McDormand shows an older woman finding friendship in a loose travelling community of nomads seeking short-term jobs. She learns to enjoy company by a campfire and nature.“I’m not homeless,” she says at one stage. “I’m just houseless.”

While there are moments when it’s noticeable that McDormand is performing opposite non-actors, her Oscar win is a tribute to how they made the movie: she and fellow producer Peter Spears optioned the book Nomadland then boldly hired a little-known director, then went on the road for months, living in vans, to shoot with real-life nomads playing versions of themselves.

McDormand plays small-town police chief Marge Gunderson who calmly and meticulously solves a murder case while seven months pregnant. It’s a blackly comic crime story that balances homespun charm with splashes of violence. And it is a masterclass in acting.

Marge does not turn up for more than a third of the movie, but she quickly takes over when she does. In a world of hapless characters spiralling towards chaos she represents calmness, order and quiet decency.