SpaceX Starlink: What time are the satellites going overhead tonight?

The SpaceX satellites will be visible across the UK all week, passing overhead in the late evening hours. To date, the California-based rocket manufacturer has launched 360 Starlink satellites. But the Elon Musk company aims to place at least 12,000 in low Earth orbit (LEO) with plans to potentially further expand the constellation.

SpaceX aims to provide satellite internet access all across the globe through a combination of Starlink satellites and ground receivers.

But with hundreds of Starlink satellites already zipping around the globe, scientists have expressed concerns the bright objects will disrupt future astronomical observations.

The growing Starlink constellation was recently photographed by astronauts on the International Space Station (ISS). 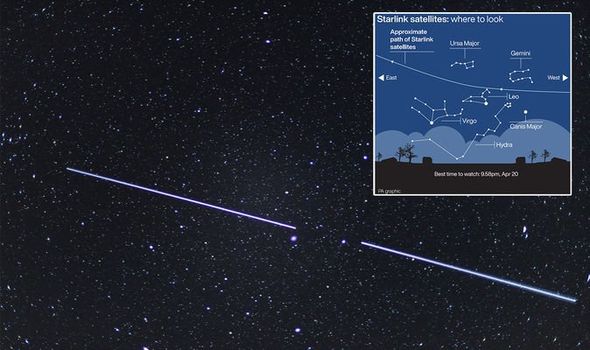 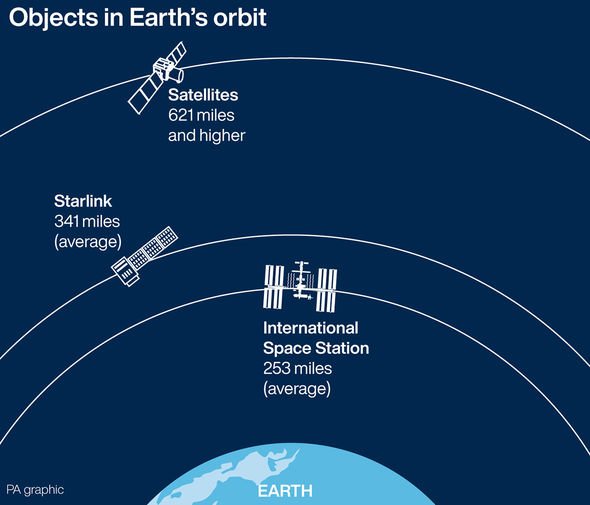 What time are the satellites going overhead tonight?

For the time being, however, you can clearly see the satellites at night without any need for telescopes or binoculars.

According to the National Space Centre in Leicester, the satellites have been deployed to orbits 180 miles above Earth but have since been raised to about 340 miles.

The satellites will appear to cut across the skies in trains of multiple bright objects.

Weather permitting, the Starlink trains will be visible all across the country throughout the week.

The last batch of 60 satellites was launched in March this year.

According to the Starlink tracker FindStarlink.com, a Starlink train will appear tonight (April 21) sometime between 10.04pm and 10.34pm.

Yep, just saw them too. It’s the Starlink satellite network

The satellites will enter the skies in the west and travel northeast.

The website’s administrator also noted sightings are not guaranteed.

DON’T MISS
California megadrought: Worst drought in history may be on its way [INSIGHT]
NASA marks 30th anniversary of Hubble with stunning images [PICTURES]
Alien enthusiast believes he has found UFO base on Mars [INSIGHT] 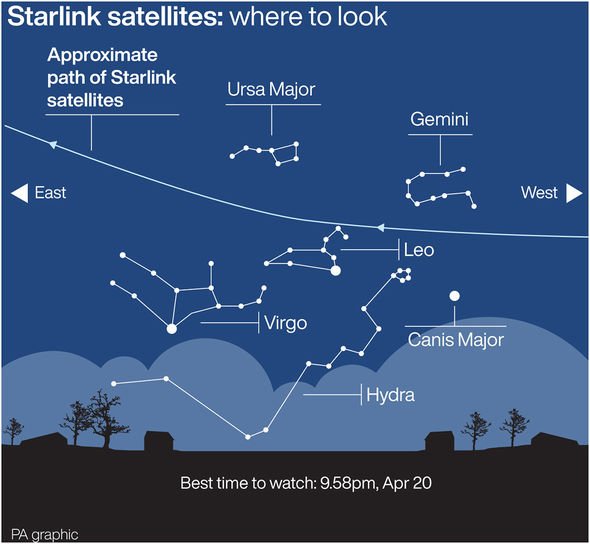 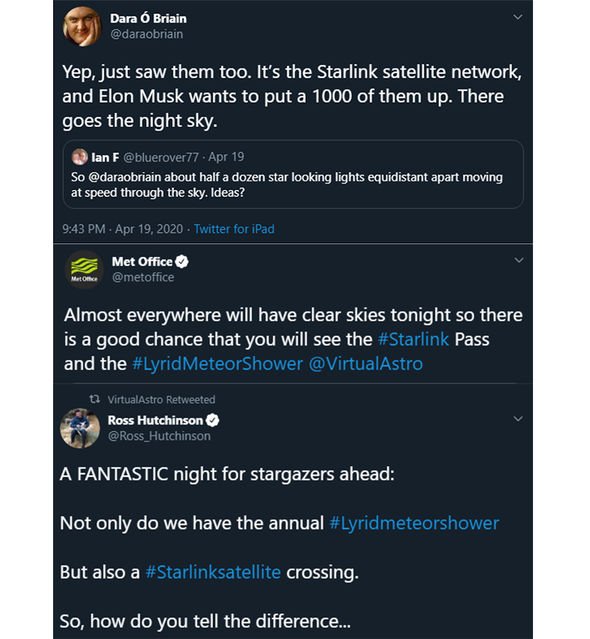 “About 20 to 25 satellites were expected to be seen, but only one or two of them were seen.

“In many places, people did not see any satellites at all.

“I know how annoying it is to wait outside and not see anything.”

The Met Office expects the skies to be clear tonight, giving stargazers a chance of seeing the Starlink satellites and the Lyrid meteor shower.

The Met Office tweeted: “Almost everywhere will have clear skies tonight so there is a good chance you will see the #Starlink Pass and the #LyridMeteorShower”

Stargazers up and down the country have already shared their photos and videos of the satellites.

Comedian Dara Ó Briain tweeted on April 19: “Yep, just saw them too. It’s the Starlink satellite network, and Elon Musk wants to put 1000 of them up. There goes the night sky.”

Marcus Mayes from Liverpool said: “Elon Musk Starlink Over My Back Garden #Starlink”

And ITV weatherman Ross Hutchinson tweeted: “A FANTASTIC night for stargazers ahead:

“Not only do we have the annual #Lyridmeteorsower

“But also a #Starlinksatellite crossing.”