STEPHEN GLOVER: How to beat the eco warrior bullies? Apply the law!

STEPHEN GLOVER: How to beat the eco warrior bullies? Apply the law!

For those who remember militant trade unionists laying siege to newspaper offices in the 1980s, the scenes outside printing plants in Hertfordshire and on Merseyside on Friday night and Saturday morning brought back bad memories.

Only this time it wasn’t trade unions stifling a free Press by blocking the distribution of newspapers.

The culprits were Extinction Rebellion activists – usually middle-class types who are uninterested in debate and have no respect for democracy. 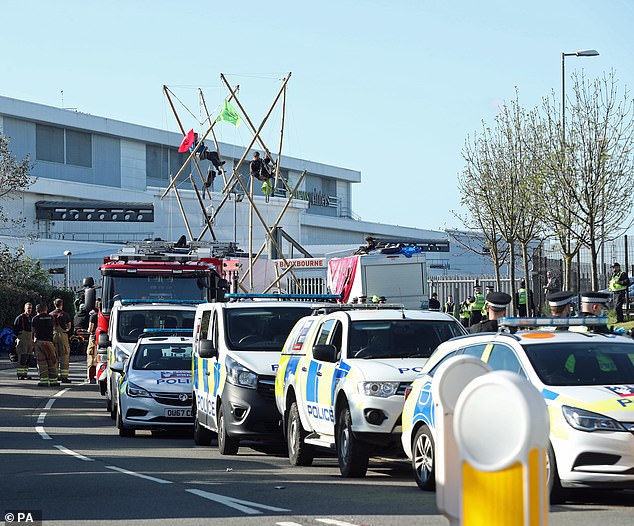 Police are pictured outside the printing works in Broxbourne, Hertfordshire. Indeed, although any attempt to suppress newspapers is chilling because it evokes communist or fascist regimes, interference in the lives of ordinary people is probably worse because of the sheer extent of the disturbance.

How does society cope with such people? The extremists are not peaceful protesters making a point, as is their right.

They are prepared to bring a great city such as London to a halt, causing inconvenience to hundreds of thousands of blameless individuals.

Indeed, although any attempt to suppress newspapers is chilling because it evokes communist or fascist regimes, interference in the lives of ordinary people is probably worse because of the sheer extent of the disturbance.

Extinction Rebellion (XR) succeeded in April 2019 and again last October in immobilising the nation’s capital. Bridges and roads were blocked, public transport suspended. Other cities suffered similar upheavals, if on a smaller scale.

Together the protests set back the Metropolitan Police at least £37million. Contrast its annual budget of just £15million for a violent crime taskforce operating in London. 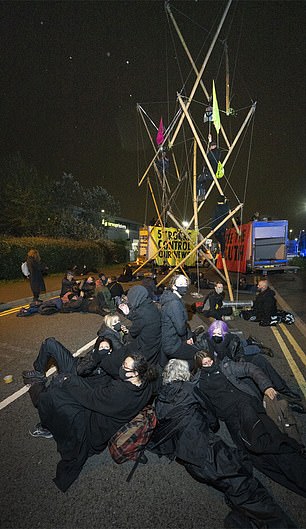 How does society cope with such people? The extremists are not peaceful protesters making a point, as is their right

The financial burden of the disruption on businesses and shops, although impossible to calculate precisely, may have been even greater. One estimate is that just two days of malarkey cost companies in the West End £12million, with footfall and spending down a quarter.

Other protest groups in the fairly recent past such as the Campaign for Nuclear Disarmament or the women of Greenham Common seem reasonable, moderate and considerate compared to the often destructive Extinction Rebellion.

So I think the Government is correct to view this organisation, which has apparently been infiltrated by several Far Left groups, as unusually ruthless and dangerous.

But it doesn’t follow that XR should be reclassified as an ‘organised crime group’, as is reportedly one option being contemplated by the Government. The thinking is this would enable the authorities to hand out much more severe sentences.

The trouble is that Extinction Rebellion can’t accurately be described as an organised crime group, which is defined by the Crown Prosecution Service as having ‘at its purpose, or one of its purposes, the carrying on of criminal activities’.

However obnoxious some of Extinction Rebellion’s activists may be, and however ready they are to break the law, the organisation as a whole is plainly not engaged in a criminal conspiracy.

To reclassify it in such terms would be to risk making martyrs of its misguided leaders. More seriously still, it might be seen to create a precedent that, when the Government disapproves of people exercising their right of free speech, they can be redesignated as criminals.

No, let’s not treat XR in that way. There is no need to. For there are already enough existing laws in the police’s armoury, if only they had the gumption to apply them.

Unfortunately, on Friday night and Saturday morning the police were slow to act. At the printing plants in Hertfordshire and on Merseyside, they failed to start clearing Extinction Rebellion protesters for more than six hours.

In the end, there were 80 arrests. Their relaxed attitude recalls the laid-back behaviour of the some of the police during the demonstrations in London last year. Absurdly, officers were filmed raving with protesters, while one policeman was spotted skateboarding on Waterloo Bridge.

Have ordinary police officers gone soft? Or is it just their timorous, politically correct bosses? There is a new tendency to try to make common cause with protesters, as evidenced by officers ‘taking the knee’ in Black Lives Matter demonstrations in June.

No one could be a more enthusiastic believer than I am in the concept of policing by consent, but that does not comprise doing nothing when existing laws are clearly being broken. 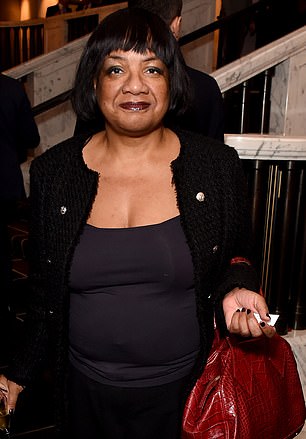 Not for the first time, Labour MP and former Shadow Home Secretary Diane Abbott was mistaken when she asserted yesterday that blockading newspaper printing plants was a ‘legal tactic’

Isn’t obstructing the Queen’s highway against the law? The 1980 Highways Act states that ‘if a person, without lawful authority or excuse, in any way wilfully obstructs the free passage along a highway, he is guilty of an offence’.

What about the law of aggravated trespass? Trespassing while at the same time intentionally obstructing, disrupting or intimidating others from carrying out ‘lawful activities’ is a criminal offence.

Not for the first time, Labour MP and former Shadow Home Secretary Diane Abbott was mistaken when she asserted yesterday that blockading newspaper printing plants was a ‘legal tactic’.

In an article in today’s Mail, Home Secretary Priti Patel hints at new laws. There has been speculation that these could protect judges, MPs and even journalists going about their normal business. Well, conceivably, if it proves necessary.

But we should beware of laws aimed at Extinction Rebellion – and certainly avoid treating it as a criminal organisation. Let’s use existing legislation, which safeguards free speech on the one hand, and doesn’t allow bullies to destroy livelihoods on the other.

All we need then is a robust and sensible police force that is determined to enforce the law.