Super Surgeons viewers were left amazed last night as doctors removed a ‘huge’ cancerous tumour weighing 1st from a pensioner’s stomach – after other professionals had told him treatment was impossible.

Ian, 71, appeared on the Channel 4 show last night as he described how a mass had ‘gradually spread’ across his stomach, and was now the size ‘of a rugby ball.’

He explained how he had been referred to palliative care after doctors told him it was ‘untreatable’ – but it was there a nurse told him to seek a second opinion at the Royal Marsden in London.

After he asked surgeon Mr Dirk Strauss to give him a ‘potential future’, the doctor went on to remove the full tumour from Ian’s stomach.

Many of those watching were amazed by the skill involved in the complex operation, with one saying: ‘How does someone train for something like this? Mind-blowing.’ 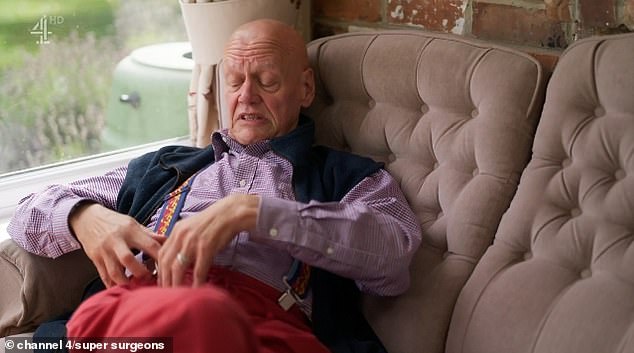 Super Surgeons viewers were left amazed last night as doctors removed a ‘huge’ cancerous tumour weighing 1st from Ian, 71,’s stomach – after other professionals had told him treatment was impossible 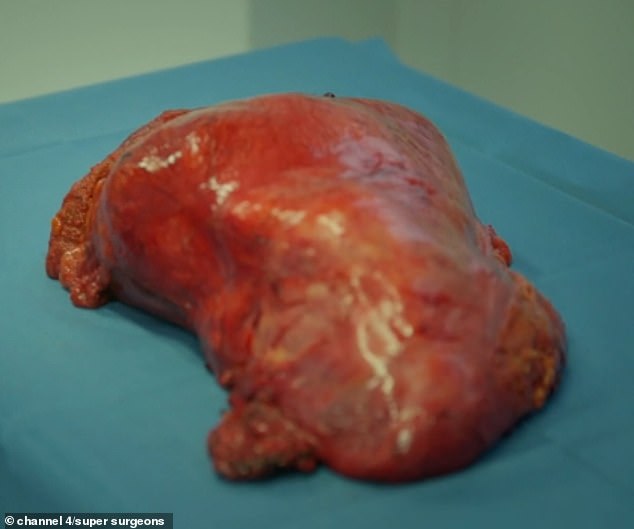 After he asked surgeon Mr Dirk Strauss to give him a ‘potential future’, the doctor went on to remove the full tumour from Ian’s stomach – which was the size of a rugby ball

Meanwhile another wrote: ‘ Unbelievable – how they managed to remove a mass of that size.’

Appearing on the programme, Ian said: ‘My first encounter with cancer was actually way back when I was 23 and I was diagnosed with a testicular tumour.

‘It didn’t stop me being a man or doing what I want to do – it did stop me having children which was a great loss.

‘I’ve had 35 years and for that I’m grateful. If there’s a chance to grab some more of it than I will.’ 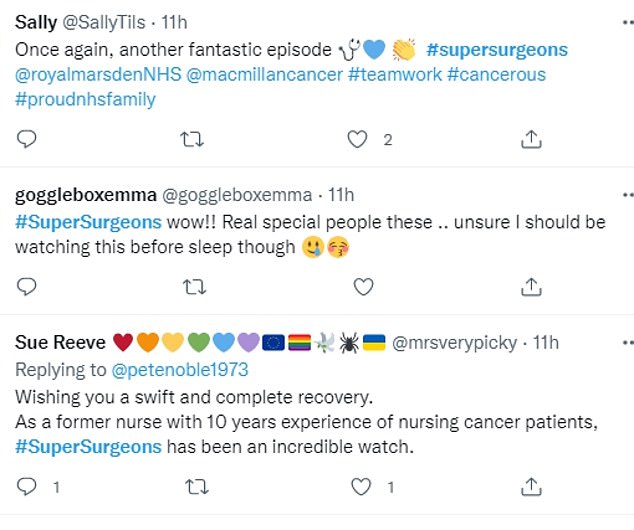 But he went on to describe how he had since developed a second kind of cancer – a fatty sarcoma.

He said: ‘When I first started noticing it, it was about the size of a book and it’s gradually spread. It’s basically the size of a rugby ball.

‘They did a biopsy and they decided it was this particular type of cancer.

‘The team said basically, “We can’t do anything” and concluded it was untreatable. So we’re basically into palliative care.’

Sarcomas are uncommon types of cancer which can grow anywhere in the body – on muscle, bone, tendons, blood vessels and fatty tissue.

Bone sarcomas are rare and affect approximately 670 people per year – but there are other types of bone cancers.

There are around 100 different types of sarcomas and about 5,300 people are year are diagnosed with them in the UK.

Sarcomas can be treated well if people catch them early, but many people do not get diagnosed until their tumours are about the size of a tin of beans.

Only slightly more than half of people with sarcomas (55 per cent) survive for five years or more after their diagnosis.

Symptoms of sarcomas can include bone pain, swellings or lumps, and restricted movement if it is growing near a joint.

Treatment may involve typical cancer therapies such as surgery, chemotherapy or radiotherapy.

However once they began palliative care, Ian said it was another healthcare professional who advised they seek a second opinion.

He said: ‘The nurse was very quick to say, “You must talk to Marsden, because they have some expertise in this area.”

Mr Strauss said: ‘As a surgeon, sarcomas are a fascinating job.

‘It can affect either the bone or the soft tissue.

He continued: ‘It’s a very privileged situation to be in, to be able to help a patient with a rare and complex problem.

‘Ian’s cancer is a very large tumour in the  back of his tummy.

‘It involves several organs – the liver and the right kidney is completely encased.

‘It has only one curative treatment, and that is surgery where you have to remove the whole tumour as well as the organs involved.

‘That is quite an undertaking so we need to be very careful so we don’t risk the patients life.’

During a meeting about the future surgery, Mr Strauss was determined to make the risks clear to Ian.

He said it was ‘complex and very major surgery’, adding: ‘The aim is to remove the whole of the tumour and the organs – most likely a kidney and a bowel on the right hand side.

‘I think we are doing the right thing. However, all this is based on the judgement of the scans.

‘We are sometimes surprised at the surgery and we find it’s not possible to remove the whole of the tumour because of the things it has grown into.’

However Ian made it clear he was determined to push ahead, despite the warnings from Mr Strauss. 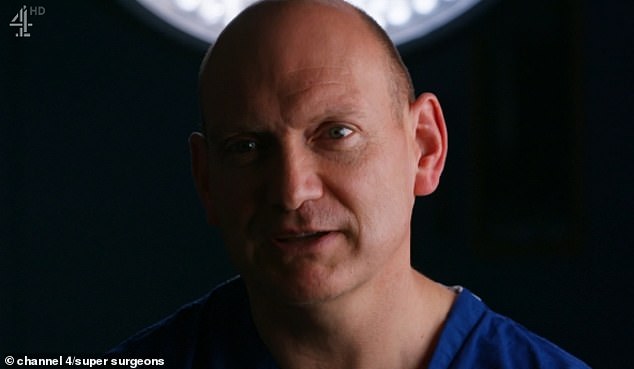 He said: ‘You’re giving me a potential future, and that’s all I can ask for. Do your best job, and I’ll be happy.’

Mr Strauss continued: ‘If we do not do anything about it, it will get bigger.

‘You have to make sure when you put someone through a major operation, the risk is justified by the opportunity to cure them from the cancer.

‘This is quite risky but I would think he has a chance to be cured from this disease so I think its the right decision.’

He explained the first step of the surgery was to get to the tumour without cutting into it. ‘it would be great if everything always goes well, but it does sometimes go wrong.’

After working his way around the blood vessels and different organs in Ian’s stomach, Mr Strauss removed the tumour in his arms and passed it to another member of the team.

He said: ‘This is basically the whole of the tumour – for reference, this is a ruler only 15 cms long.

‘We have to put it on human weighing scales. It weighs 7.5kgs.’ 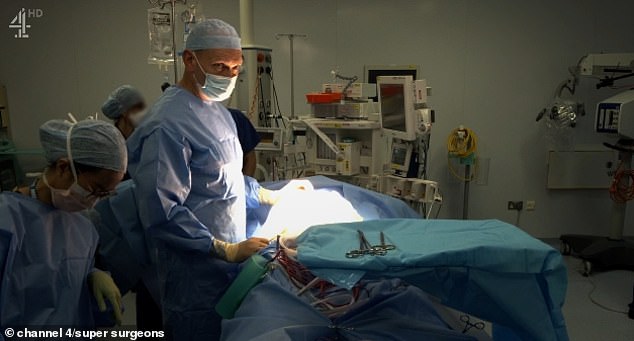 After working his way around the blood vessels and different organs in Ian’s stomach, Mr Strauss removed the tumour in his arms and passed it to another member of the team

He added: It’s always a worry, especially when patients get turned down elsewhere for surgery, whether your judgement is accurate.

‘It’s a great relief when it is actually possible to remove it completely, and it all went well, so I’m very happy.’

‘The scans and the blood tests have so far shown I’m clear as far as cancer is concerned.’

Meanwhile the doctor added: ‘We start off with the goal to help people so when things go well, it makes you proud of what you’ve been able to do for them.’

Many of those watching were left amazed by the programme, with one writing: ‘In awe of these absolute heroes.’

Another wrote: ‘I’m continually amazed by the skill of the Super Surgeons and their theatre support, also the empathy/understanding they show to their patients. Great series.’

‘That was so inspiring – seeing how passionate the surgeons are about the future. There is always hope,’ another added.