The circus students bending over backwards to put on a show

Despite everything, despite this damned pandemic, the Circus Arts class of 2020 are determined to graduate. They will bend over backwards. They will juggle whatever is thrown at them. They will tie themselves in knots and jump through hoops. 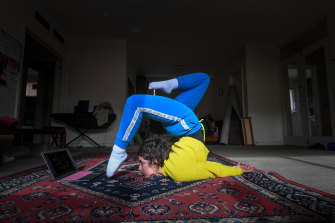 Director Mike Finch calls them his “magnificent seven”. He even plays them the theme tune from the movie.

Three-and-a-half years ago there were 22 young, talented students in their first year at NICA, the National Institute of Circus Arts, stars of the future on the first slippery rung of their career. 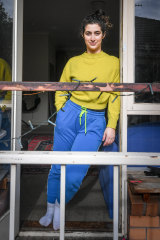 “This is all I want to do in life,” says Sassine. “It’s another lockdown. It isn’t going to shake me.”Credit: Justin McManus

Now there are just seven. The rest dropped out: some from the incredible physical demands of circus studies, but most last year after the pandemic hit.

To graduate, they have to perform in and be graded on an ensemble production which, conceived more than a year ago, was postponed at the height of Melbourne’s big 2020 pandemic lockdown.

And now they’ve been hit by a lockdown again, just weeks from their scheduled debut, six months into the fourth year of their three-year course.

“I felt a kind of disbelief when it happened,” says Antonia Sassine, one of the students. She specialises in aerial contortion and spinning around inside a wheel. She can’t do either in lockdown (she tried practising the wheel in her driveway, but it was too uneven).

“It definitely has shaken a lot of people, particularly with this show. We need to be in the same room.”

Finch, a former artistic director at Circus Oz, was brought in to direct last year’s show – which is now this year’s show.

“These are the last seven who have stuck with it, with incredible resilience,” he says, adding that the students have trained eight hours a day from 8.30 in the morning, combining that with business studies, circus history and art appreciation. “They’re literally sweating for most of the time.”

They were so close this time round. They had devised a show together, starting on Zoom during last year’s lockdown, then back at NICA.

“And then we went into this final lockdown, when we were almost across the line,” Finch says. “And everything has had to shift again.”

“But ultimately the thing about circus, the reason it’s such an exciting artform for audiences, is that you kind of have to be there,” says Finch.

It’s been hard mentally, too. “This is their form of expression… if you say to someone ‘you can’t get on stage and do the thing you do’, it’s a little bit like what someone might feel if they lost their voice or were blinded.”

The public performance season is cancelled and tickets refunded. The show will go on, at a date TBA, and it might be videoed, or they might be able to get a small private audience in.

Finch is determined to get his magnificent seven over the line. He tells them this job is full of unexpected hurdles – that part of being a circus performer is adapting.

“There’s always some sort of drama going on. So understanding there are many ways to skin a cat is a really good lesson.”

Sassine says she has days where she’s tempted to reevaluate her life choices.

“Those days are really bad,” she says. “But, you know, this is all I want to do in life. It’s another lockdown. It isn’t going to shake me. It might make me hibernate for a little bit, but it’s not going to shake me out of this.”