Home » Lifestyle » The drudge retort: The dark marital revenge fantasy of Kevin Can F**k Himself

The drudge retort: The dark marital revenge fantasy of Kevin Can F**k Himself

As Alexis in Schitt’s Creek, Annie Murphy was relentlessly, naively, air-headedly sunny (and yes, hopelessly self-involved). In Kevin Can F*** Himself, she’s like a Melbourne spring day, bright one moment, cloudy the next.

But then, so is the whole show, which is really two programs in one: a brightly lit, vacuous, multi-camera sitcom on the one hand; a washed-out, dark and brooding single-camera drama on the other. 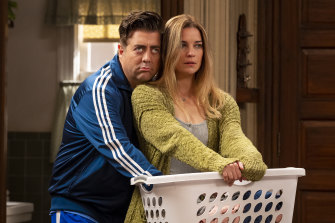 Eric Petersen and Annie Murphy in a scene from the comedy series Kevin Can F*** Himself.Credit:Jojo Whilden/AMC

In both halves of this split-personality proposition, Murphy plays Allison McRoberts, a housewife in working-class Worcester, Massachusetts, with a part-time job in a liquor store and a full-time man-child of a husband at home. Kevin (Eric Petersen) is instantly recognisable from a vast catalogue of domestic sitcoms, a wise-cracking, sports-loving, lug-headed doofus who never lifts a finger unless it’s wrapped around the handle of a beer stein (the short-lived Kevin Can Wait, starring Kevin James as a retired New York cop, is only the most obvious reference point).

In the sitcom part of the show – where the living room is perpetually occupied by brother and sister neighbours Neil (Alex Bonifer) and Patty (Mary Hollis Inboden) O’Connor and Kevin’s father Pete (Brian Howe) – Allison is the long-suffering drudge and butt of every joke. On the dark side, she has suddenly realised after 10 years of marriage what a dreadful bargain she has struck.

Starting with little acts of rebellion, like stealing the exorbitantly priced sweatshirt her husband has ordered from a sports memorabilia site, Allison begins to assert her independence. But long before the first episode is through her thoughts have turned to murder. 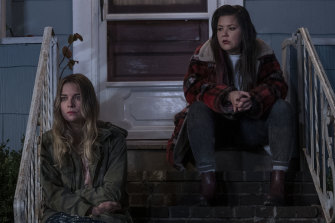 The developing relationship between Allison and her neighbour Patty (Mary Hollis Inboden) is one of the more fascinating threads in the show. Credit:Jojo Whilden/AMC

Good though Murphy is, she can’t get the show over the logical elephant in the middle of its overlit room. Why doesn’t she just leave him? Kevin may be a schlub and a chauvinist, but does he really need to die? Just forcing him to get his own beer would surely be punishment enough.

Allison is a little like Rachel (Alexandra Daddario) in The White Lotus, a woman who realises she’s made a terrible mistake but feels powerless to undo it. Both dream of something better – for Rachel, a career in journalism or working for a non-profit; for Allison, it’s spending her days sipping coffee and reading James Joyce novels by the waterfront. But both are pinned by economic circumstances – in Rachel’s case it’s wealth, for Allison it’s poverty – a crippling lack of confidence, and an inability to imagine themselves out of the impasse. At least Rachel’s cage is gilded.

Does it work? After three episodes, I’m almost as undecided as the show. It’s a dark marital revenge fantasy shackled by the brilliance of its own conceit. The sitcom bits are deliberately designed to grate, and they succeed, but that only makes them unbearable to watch. The dramatic bits intimate at a looming Breaking Bad-style leap to the dark side, but other than simply hating the guy she’s married to, Allison’s motivation for wanting to off him remains almost as dim as the lighting.

What does intrigue is the way certain elements of this Janus-faced show bleed from one side to the other. The evolution of Patty, and of the relationship between the two women, is fascinating too. And I’m yet to crack the code on why Kevin hasn’t appeared on the dark side so far (I have my suspicions, but we’ll see).

In other words, there’s enough there to keep me watching, but only just. Allison has eight episodes to change her life. But if she’s still with Kevin at the end of it, frankly she can go … well, you know the rest.