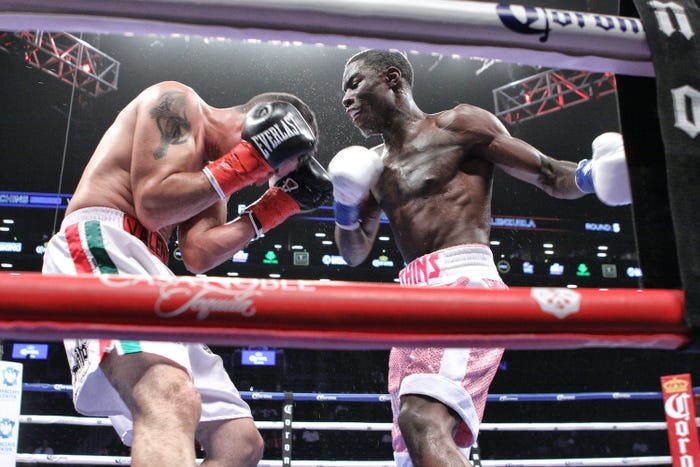 Richardson Hitchins was eight years old when he saw Floyd Mayweather for the first time.

It was 2008 and Mayweather had just broken Big Show's nose during a chaotic appearance with the world's leading professional wrestling firm WWE.

Hitchins had a boxing-mad grandfather but the young boy had never seen a fight himself.

As a kid, he knew all about RKOs, choke slams, and tombstone pile-drivers but probably thought the Philly Shell was something you found at the beach.

Mayweather's cockiness and unbeatable aura piqued Hitchins' interest in the sport, and around 10 years later he signed professional terms with Mayweather Promotions, had the keys to Floyd's condo, and was being hailed as a fighter who could have the beating of Errol Spence Jr. — America's best boxer according to Insider.

It is quite a journey for Hitchins, a 23-year-old American who excites Mayweather Promotions so much the company keeps inviting the New Yorker back to Las Vegas so it can try and develop him into one of boxing's stars just like its cross-state ticket-seller Gervonta Davis.

Ahead of the fight, he told Insider he wants to put on a big show himself, move up the super lightweight world rankings in 2021, and challenge the likes of Mario Barrios for a championship.

Hitchins first met Mayweather four years ago at the Olympics

Hitchins, fighting for Haiti thanks to parental heritage, lost to the USA's Gary Russell in a preliminary bout at the 2016 Olympic Games.

After that defeat in Rio de Janeiro, Hitchins knew his amateur career had come to an end.

He called Sam Watson — a talent manager in California who has the gift of the gab, and is one of the most trusted confidantes to Premier Boxing Champions founder Al Haymon.

Hitchins told Watson he wanted to turn professional, but said he only wanted to sign with one firm — Mayweather Promotions.

"Floyd's at the Olympics right now," Watson told him. "When you see Floyd, call me, and put his security on the phone. I'll get you next to Floyd."

Hitchins struggled to believe what he was hearing.

Excitement replaced frustration as he forgot about the loss to Russell and focused on meeting the man who he'd seen in WWE all those years ago, and who inspired him to pick up gloves and learn to box in the first place.

When he finally saw Mayweather face-to-face, he acted like an unashamed fanboy and brought Mayweather-mania to Brazil all by himself.

Mayweather and Hitchins exchanged phone numbers on the spot.

Hitchins told us Mayweather had his eye on Shakur Stevenson at the time, an Olympic silver medal winner in the bantamweight division.

Mayweather invited Stevenson out for dinner in Rio. Stevenson apparently asked his friend Hitchins if he wanted to tag along and meet the former five-weight champion.

"Shakur's like: 'You want to go eat with Floyd?' And I was all: 'What?! Hell yeah!' So we went out to eat with Floyd, and he told us all about the pro game."

Hitchins said that although Mayweather didn't know too much about him at first, the CEO of Mayweather Promotions Leonard Ellerbe had long identified him as a talent destined for their stable.

Ellerbe has been by Mayweather's side for decades, and has since nurtured Gervonta Davis into an emergent star and one of boxing's most popular fighters today.

At a press conference ahead of Davis' 2017 fight with Jose Pedraza, a bout which "Tank" later won by seventh round knockout, Ellerbe told Hitchins behind-the-scenes that he needed to turn pro with Mayweather Promotions.

"Leonard was saying: 'You need to turn pro with us. I'm going to get you active.'"

Within years, Mayweather began to get increasingly excited about the talent Watson found and Ellerbe secured.

"Floyd knew I could fight but he didn't know I was special until I fought at the Mayweather Boxing Club in Las Vegas," Hitchins says.

"That's when he knew I was going to be a champion, a top guy."

This realization came early in 2020, with Mayweather now convinced his promotional vehicle had a potential star on its hands. One who could defeat all the best fighters at super lightweight and at welterweight.

Mayweather even believed Hitchins could compete with Spence — the undefeated 147-pounder who wrote boxing's comeback tale of the year when he defeated Danny Garcia a year after wrecking his Ferrari at high-speed.

While Gervonta Davis was preparing for his Showtime pay-per-view bout with Leo Santa Cruz on October 31, Hitchins was training in the background.

Neither went without Mayweather's attention.

After Hitchins had finished one session of sparring, bag-work, and pad-work, he walked out to the Bugatti-laden parking lot where Mayweather ran out after him.

"He came up to me when we were by my car, looked me in the eyes, and said, 'Do you want me to lie to you, or tell you the truth?'"

Hitchins wanted the truth but did not expect to hear what Mayweather was about to say.

"You're the best boxer in that gym right now," Mayweather said, according to Hitchins.

"My trainer said, 'What? Floyd, stop playing, there's all the top guys in that gym — everybody.' And Floyd said, again, 'You're the best boxer in that gym.'

"I thought he was kind of joking," Hitchins said. "But word got around, and Gervonta's people said, 'Yo, Floyd was watching you spar, and he kept saying, 'Damn, that's Richardson right there and that boy can box!'"

Mayweather told Hitchins he's got the beating of Spence

Hitchins returned to New York days later. He was firmly on Mayweather's radar, and he was happy.

One morning his phone buzzed at 3 a.m. with a message from Mayweather.

"I'm on my jet and I want to have a private conversation with you," the text said.

"He was telling me how special I was. And that he wanted me to fly back out to Vegas."

According to Hitchins, Mayweather went on: "Let's get you back out to Vegas as your fight is in a few months and I don't want you in New York, partying. Stay away from all the bull-s—. I want to get you a house. Come out here."

When Hitchins returned, his friend Shakur Stevenson — now a Top Rank fighter — picked him up from the airport as Mayweather was asleep.

Stevenson took Hitchins to the boxing manager J.Prince's house, where Mayweather picked him up and took him to the Mayweather Boxing Club.

Hitchins apparently begged Mayweather to spar Stevenson, but the veteran held him back and just wanted to see him work-out for a few days first.

Mayweather then gave him keys to a condo and they were almost inseparable for his entire stay, training, eating, and watching boxing together.

"He was just in the gym with me, training me, watching me spar, and even if he wasn't in the gym he'd bring me over to his house," Hitchins said.

"We'd watch boxing together, talk about what we did that day in sparring, and what I could have done better.

"He was just very hands-on with me," he said.

Hitchins is targeting future fights with boxing's other young kings

Hitchins sparred the Matchroom athlete Devin Haney and appeared almost offended when we asked what he had learned from the training sessions.

"It was iron sharpening iron. It was just … go work — two young fighters sparring each other," he told us. "I didn't learn anything from Devin Haney. At all."

Regardless, a future bout with Haney is one Hitchins has his eye on. He also wants to take on other core members of boxing's stacked roster of 25 and under fighters.

Haney, Lopez, and Garcia all compete in the lightweight division, but Hitchins said as they're all young and growing, it won't be long before they join him at the super lightweight limit.

"I don't have a nutritionist [yet], and when I'm going to be going away on camps, to get the weight off easier and doing things even more properly, I'll be at 140 for a while.

"So when those guys come up, those are going to be great fights."

Some young fighters might not focus too much on their opponents. But Hitchins is aware of who he is up against, and has assessed the strengths and weaknesses of the man he'll be sharing a ring with Saturday.

"I know what Argenis does best. He's got great patience and is a good counter-puncher. But I think he's flat-footed and a lot of fighters he beat are flat-footed.

"He beat Ivan Redkach, that's a pressure Ukrainian who's flat-footed, and Rob Easter … who, I don't think at the time, is on the level that I'm on right now.

"I box champions and have done since a kid, fighting top fighters since a kid, and have sparring matches with top, young fighters.

"I done fought a lot of top guys, and beat top guys. I bring a lot of experience to the table, too, and I'm focused on what I do Saturday night — I'm a sharpshooter, a sharp boxer, that's who I am."

Hitchins is visualizing victory at the weekend and told us his goal in 2021 and beyond is to fight for a world championship.

"I want to fight Mario Barrios," Hitchins said. "He's young, I'm young, and there's not many people out there for him apart from Regis Prograis and me.

"But before I worry about Regis Prograis and Mario Barrios, I got to get past Argenis Mendez and whoever else is in front of me after that."

Considering the combined muscle of Mayweather and Ellerbe behind him, it would not be a surprise to see him go all the way.