The most annoying things parents do according to adult children

Now who’s being childish! People reveal the most irritating habits of their overbearing parents – from tidying up without being asked to expecting them to be free for last-minute plans

Adults have revealed the most annoying thing their parents do in an amusing and relatable thread.

Reddit users from across the UK took to the forum to share the things their parents do that causes them the most frustration, including one person who vented about their parents assuming they are free for every invitation and another that claims their parents act sympathetic because they are single.

The discussion began after a woman explained she had to spend her bank holiday weekend searching for her bag and passport after her mother unexpectedly tidied her house while she was at work. 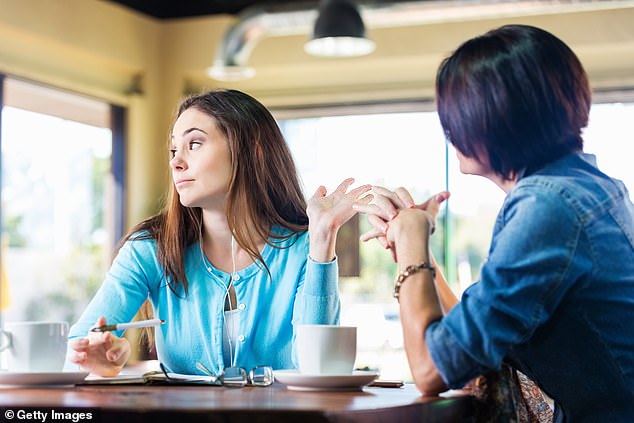 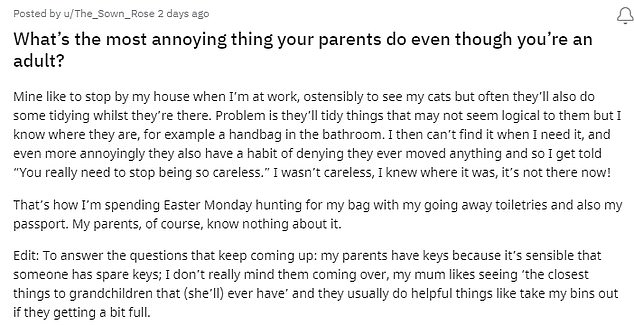 Posting on Reddit, the woman complained about her mother moving items around her house while she’s at work

Venting her frustrations, she wrote: ‘What’s the most annoying thing your parents do even though you’re an adult?

‘Mine like to stop by my house when I’m at work, ostensibly to see my cats but often they’ll also do some tidying whilst they’re there. Problem is they’ll tidy things that may not seem logical to them but I know where they are, for example a handbag in the bathroom.

‘I then can’t find it when I need it, and even more annoyingly they also have a habit of denying they ever moved anything and so I get told ‘You really need to stop being so careless.’ I wasn’t careless, I knew where it was, it’s not there now!

‘That’s how I’m spending Easter Monday hunting for my bag with my going away toiletries and also my passport. My parents, of course, know nothing about it.’

One person complained about their mother expects them to spend all their time together, while another claimed their mum doesn’t make any effort with their children.

‘Mine RSVP for me and then don’t even tell me the event is happening until I find out from the host saying they’re glad I’m coming or my parents flippantly mention it a week in advance.

‘They also spring plans on me a day before. It got much better when I’d had enough so I kept telling them I couldn’t attend due to short notice, they’re starting to get the message now.’

Many responses to the thread complained about their parents making decisions for them, including how to spend their free time

Another said: ‘My dad has absolutely no respect for other people’s time. Or at least mine. I’d be waiting around all day because he said he’s come round today ‘in the afternoon’

‘He always arrives hours later than he says and has a habit of ringing you last minute and just assuming you have no plans. Then still being massively late.’

Others admitted they get annoyed when the parents act like they know best, with one person revealing their mother tries to ‘strongly influence’ their job search.

Elsewhere, a commenter shared the frustration of their mother asking for advice but only following it if someone else validates what was said.

One person said: ‘Question every decision we make. My wife just got a new job more than double her pay but 50min commute. They didn’t say congratulations, their exact words were, “it’s a lot of driving”.

‘This is both sets of parents. We bought a house in our town, my father in law started sending us cheaper houses on Right Move in the middle of a s*** area as a comparison for why we spent too much money. We weren’t asking them for any help.’

Another wrote: ‘Whenever I visit my parents, my dad invariably tries to rope me into doing donkeywork for him (mostly in the garden) and then genuinely and not in a joking way whinges about his kids being ‘lazy’ and ‘useless’ when I refuse.

‘The guy’s only 65 and he’s the fittest 65-year-old I know – he’s fully capable of cutting his own damn lawn.

‘I also had to nip my mum’s attitude to my dating life in the bud when I was in my early 20s. Now engaged and I know for certain that she didn’t approve of my fiancé when I first met her, but I’d slammed that door shut on my mum in advance.’