Home » Lifestyle » The strange Stella Maris is a rare kind of novel, even for Cormac McCarthy

The strange Stella Maris is a rare kind of novel, even for Cormac McCarthy

Cormac McCarthy’s previous novel The Passenger, published in October, was a haunted affair. Lingering at the margins of nearly every page was Alicia Western, the deceased sister of chief protagonist Bobby Western, plaguing his waking hours and sleepless nights. In Stella Maris we are witness to a séance: the ghost speaks.

Told entirely in dialogue, Stella Maris takes the form of a conversation between Alicia and her doctor, Robert Cohen, a practitioner at the Stella Maris Hospital in Black River Falls, Wisconsin. The year is 1972 and Alicia has self-committed, already her third visit to the facility by the age of 20. A doctoral candidate in mathematics and a prodigy from a young age, she is also a diagnosed paranoid schizophrenic prone to hallucinations and suicide attempts. 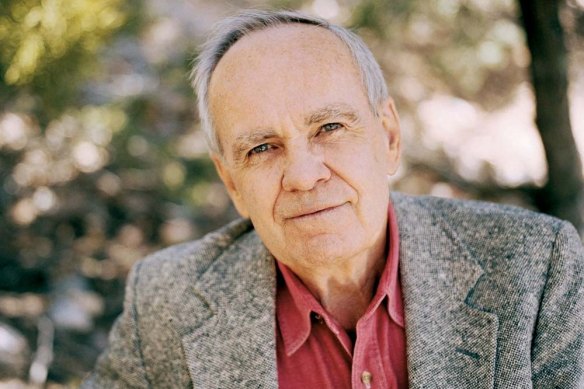 Stella Maris: Not since 1968’s Outer Dark has Cormac McCarthy given such extended space to a female character.Credit:AP

We learn a small amount about her in the opening doctor’s summary (“Jewish/Caucasian female – attractive, possibly anorexic”) but Alicia is, for the most part, her words, a torrent of talk, theory and conjecture that unwinds with little need for prompting. She’s a wheel that can’t stop turning, lost in the gears of forceful cognition.

Alicia, like Bobby, is haunted by her parents’ work on the atomic bomb, but Alicia takes her brother’s intellectual curiosities – The Passenger occasionally dipped its toes in mathematics and string theory among other concerns – to a level rare in contemporary fiction. On one page alone a reader can find references to Euler, the Bourbaki group, Riemann, the Fifth Postulate and Euclid, and for the most part Alicia speaks to the imaginary reader the way she does to her hard-working analyst: try to keep up.

McCarthy has, in the rare interviews he grants, spoken of his comparative disdain for the writing community, and his fascination with physics and contemporary scientific concerns, and Alicia’s headlong talk certainly reflects these interests.

How effectively he’s grafted these concerns to the bones of fiction is another matter. The early bombardment of name checking certainly establishes Alicia’s intellectual bona fides, but for much of the time it feels ponderous and emptily bombastic – a chance to indulge in grandiose rhetoric (“Mathematical ideas have a considerable shelf life. Do they exist in the absolute? How is that possible?”) before moving on to the next verbal assault.

There’s also the matter of how McCarthy has chosen to deliver these monologues. Always an effective utiliser of curt but suggestive dialogue, he has here abandoned his indisputable art as a prose stylist for a book made entirely of dialogue, in turn sandbagging Alicia’s soaring words – unspeakable as such, but so often rich and vivid that mere realism seems a tedious demand – with regular intrusions from her comparatively dull counterpart. A brilliant mind and a compelling speaker, Alicia is also an acute self-diagnoser, and beyond the medical attention, she doesn’t seem to need the company.

Thankfully for the book, these limitations of form and approach give way in the second half to an increasingly personalised style, one that reconnects with the melancholy of Bobby in The Passenger. Most crucially, the earlier obtuseness reveals itself in these later stretches to be simply another way of approaching concerns McCarthy has circled since his earliest writing: silence, damnation, end times. As the defensiveness and unashamed erudition of the initial conversations gives way to outright confession, the book finds a tone wholly its own, terrified yet resilient, and utterly illusionless.

Nonetheless, a frustration lingers. As Alicia’s recollections turn darker, her isolation grows stronger, and it’s at these moments when the book’s formal limitations most chafe. A reader longs for these downward spirals in a shape more expressive, more capable of deftly pairing with the novel’s thematic ambition. One wishes for a novel resembling something such as David Markson’s classic Wittgenstein’s Mistress, instead of the halting rhythm of Stella Maris′ imagined transcriptions.

McCarthy’s novels are famously masculine affairs, and not since 1968’s Outer Dark has he given such extended space to a female character. When afforded attention in his recent work, women have tended to occupy mythic forms: mothers and whores, echoes and archetypes. In Stella Maris he has tried, at a shockingly late age, for something new, and in every possible way, from voice to subject matter to perspective. That it works at all feels remarkable, and at its best the book harmonises both sadly and gorgeously with its recent predecessor. Side by side, both novels affirm the extraordinary poetry and strangeness of McCarthy’s vision.

Stella Maris by Cormac McCarthy is published by Picador, $34.99.

The Booklist is a weekly newsletter for book lovers from books editor Jason Steger. Get it delivered every Friday.