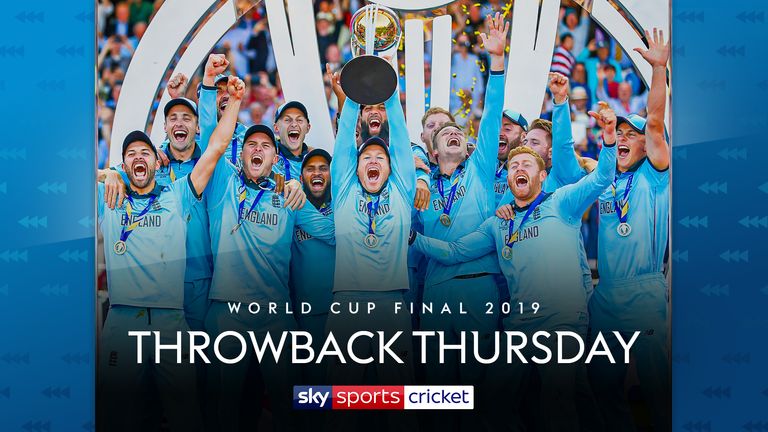 Jos Buttler whipped off the bails to run out Martin Guptill in the Super Over and spark wild celebrations as the hosts claimed their maiden global 50-over title on a sensational sporting day in the capital, not just for cricket.

In the latest edition of Throwback Thursday, our weekly cricket feature which looks back on some memorable feats of years gone by, David Ruse recalls his memories from that amazing day… 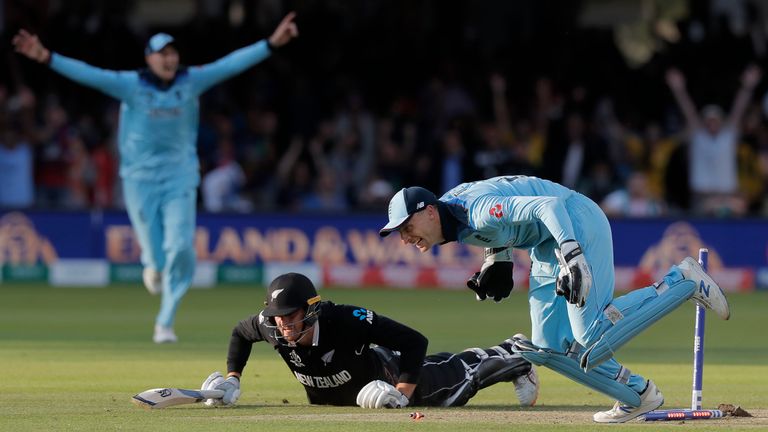 The greatest white-ball game in history didn’t exactly have the most electrifying start.

It was a grey, drizzly morning as I strode into Lord’s last July to see which of England and New Zealand would end their World Cup hoodoo, and that pesky rain delayed play by 15 minutes, not that it dampened the expectation and vibrancy in the stands too much.

When the cricket did begin, it was rather attritional stuff on a sticky surface, with the Black Caps posting a working total of 241-8, albeit that could have been increased had Mitchell Santner chosen to attack rather than duck the final delivery of the innings, a Jofra Archer bouncer.

Just think of the difference a single could have made…

Things cranked up a notch as the hosts began their chase.

Jason Roy survived a tight lbw review after being pinned on the pad by Trent Boult from the first ball of the innings, while England slipped to 86-4 before Ben Stokes and Buttler’s century stand had their team in control as we approached what I expected would be the final five overs of play. 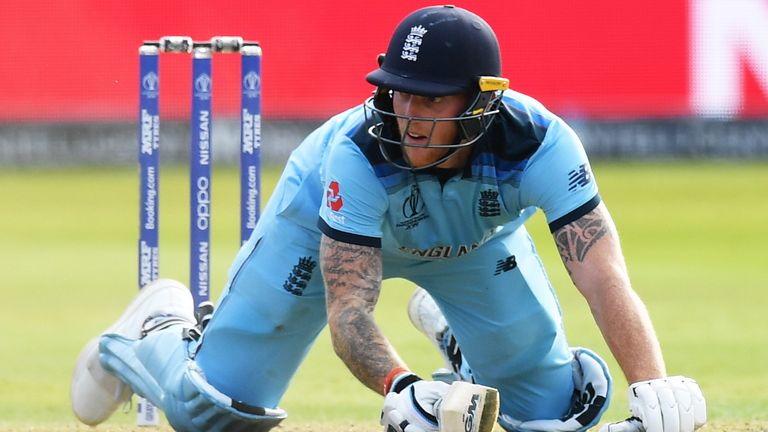 But, and it seems sacrilege to say considering he is one of the white-ball players of his generation and arguably England’s greatest ever, the highest of drama only came when Buttler got out. It was at that point when I had no idea who was going to win or, indeed, what chaos was to follow.

The Sky Sports green room/production station – where I was sat, having been charged with writing the report and also getting social-media content – had been a hive of activity all day.

Exactly who popped in is a little bit of a blur as my eyes constantly darted between the pitch and the people around me but I think we may have been joined, at various stages, by Kevin Pietersen, Graeme Swann, Sam Billings and Ollie Pope.

I’m certain Brendon McCullum stuck his head in and I know Jonathan Trott did as I attempted to high five him once Buttler had removed off the bails to run out Guptill and win the World Cup for England “by the barest of margins” on that sun-kissed evening.

But whoever was alongside that day’s Sky Sports pundits Shane Warne, Rob Key and Andrew Strauss, in a green room not designed for such a throng of people, was turned into a nervous wreck as the last knockings of England’s innings and the subsequent Super Over took place. 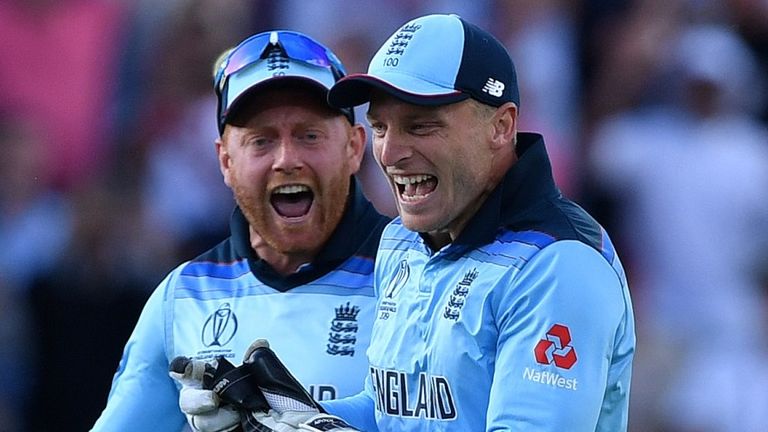 During my years doing this job, I have listened on intently as pundits I admire debate tactics when tight finishes are in store and there was a little of that during this epic Lord’s climax, but I mainly remember screams, jumping and shrieks of utter disbelief.

Those were interspersed by some serious work for the producer, though.

The game was being simulcast on Channel 4, then switching over to More 4 once that day’s British Grand Prix got under way, before returning to Channel 4 afterwards, so he had to ensure that that message was being relayed to viewers, while also checking in with the officials to clarify the Super Over rules and who would win in the event of a tie.

The final hour of this World Cup final was astonishing, on the field and around me in the media centre, made even more stimulating by the fact that Novak Djokovic and Roger Federer were engaged in a Wimbledon final for the ages at the same time. 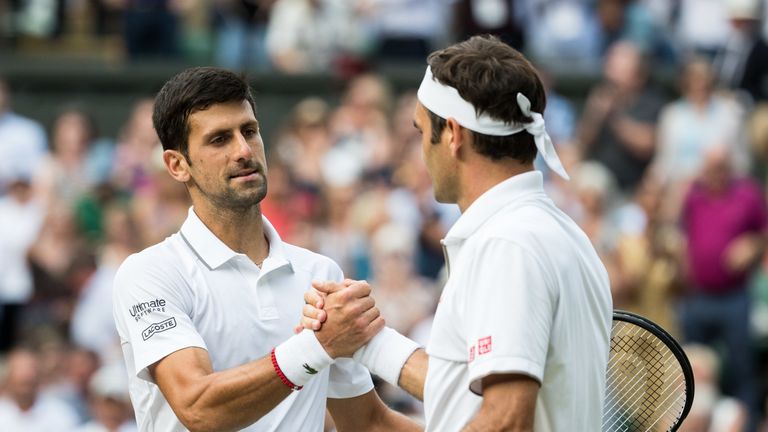 On the occasions my eyes were in my laptop and away from the cricket, I was never quite sure if groans and cheers were to do with events at Lord’s or on the lawns seven or eight miles away.

Mainly, though, it was the cricket as we saw sixes for Stokes – one earned as Boult trod on the boundary rope trying to take a catch, one nailed into the stands off Boult, and, most memorably of all, one coming after Guptill’s throw from the deep deflected off Stokes’ bat and trickled to the rope.

As that remarkable 50th over played out (0, 0, 6, 6, 1 and Adil Rashid being run out, 1 and Mark Wood being run out) the World Cup final was going to a Super Over and now had the sporting arena all to itself, with Djokovic beating Federer in a tiebreak to win 13-12 in the fifth set and become Wimbledon champion for the fifth time just as extra-time across London got started.

The consensus when England scored 15 from their six additional balls was that it was a good score – New Zealand needed 16, after all, as a tie would see Eoin Morgan’s men triumph on boundary countback.

That belief wobbled when Jimmy Neesham tonked Archer for a maximum over midwicket to reduce the Black Caps’ equation to seven from four balls. I only saw one winner. 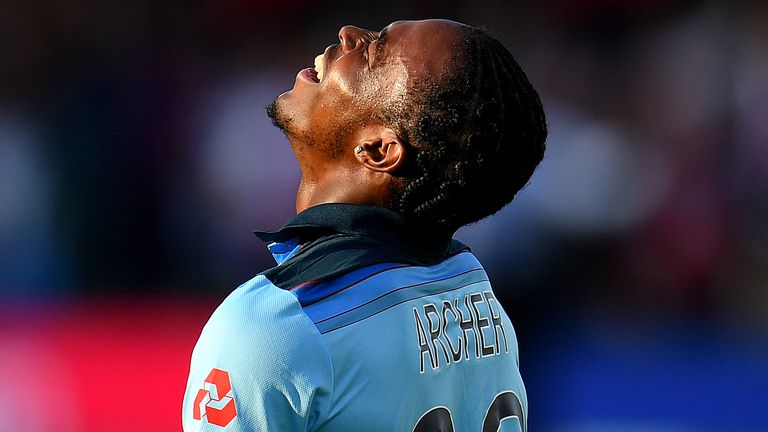 Strauss – who had played a pivotal role in England’s white-ball revolution after being appointed director of cricket following the 2015 World Cup debacle – could barely watch. Four years of hard work was down to four balls, bowled by someone who only qualified for England four months ago.

Four balls later, it was pandemonium.

People bouncing around like children, with England’s transformation from white-ball chumps to champs complete. The moment made all the better as, with the door to the green room wide open, we heard Ian Smith’s impeccable commentary filter through from the booth next door.