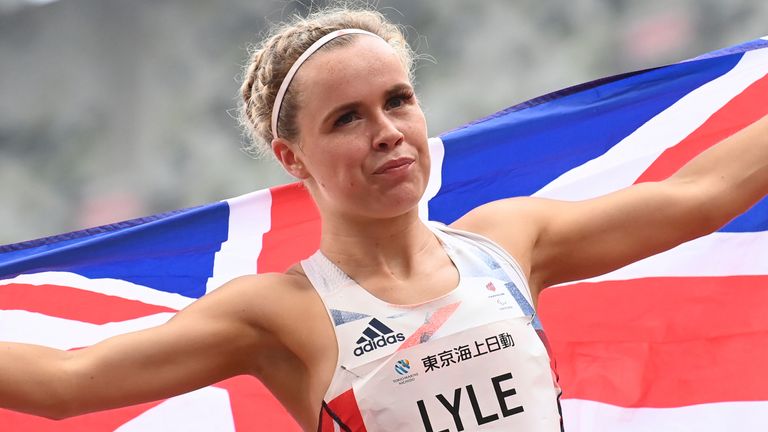 The 21-year-old crossed the finish line in a season’s best 14.18 seconds to finish third in the event for the second successive Games.

On the opening day of track action in Japan, gold went to China’s Xia Zhou in 13 secs, with Australian Isis Holt taking silver, 0.13secs off the pace.

Lyle, who has cerebral palsy, struggled with mental health issues in Rio five years ago but still managed to come away with a silver and two bronzes.

“For me it was about going out there and enjoying the experience. To run the time I have, and to enjoy the experience, I am really happy,” she said.

“It was always going to be difficult to challenge for gold and silver so I really had to stick to my own race plan. I didn’t expect the time.

“It was hard to gauge where I was because the other two girls [Zhou and Holt] were quite far ahead but I just focused on what I needed to do for my race.

“I know from my heat I seized up a bit so I knew I had to relax more.”

Ola Abidogun failed to qualify for the men’s T47 100m final after finishing fourth in the heats in a season’s best 11.17 seconds.

“I’m two hundredths away from a place in the final so I’m devastated,” he said. “It is a season’s best so I can take that away from me. But it’s not close to my PB.

“I’ve had a difficult last 18 months, I’ve had an ankle injury recently which is a sprinter’s curse. So it is nice to be able to run again – I was still struggling with it in July. But I know I have more to give and should have reached that final.”