Liverpool forward Mohamed Salah, 28, said “no-one knows the future and what will happen” when asked about his future at the club. (La FM Colombia)

Crystal Palace have told Ivory Coast winger Wilfried Zaha, 27, he can leave Selhurst Park if an acceptable offer comes in, which is thought to be around £40m. (Times – subscription required)

Brighton have made an enquiry to sign Germany Under-21 defender Luca Kilian from Paderborn for £3m. (Mail)

Serie B side Benevento are interested in signing former Liverpool and England striker Daniel Sturridge, 30, on a free transfer. (Mail)

Manchester United face losing £70m and Chelsea £50m should either side fail to finish in the top four and qualify for the Champions League next season. (Sun) 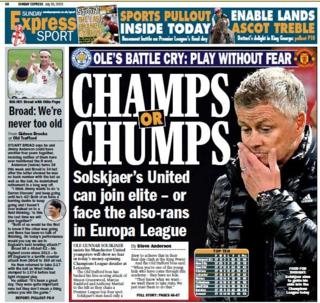