Federal leaders have ignited a political fight on trust and honesty after Prime Minister Scott Morrison misrepresented several Labor policies while denying he had ever told a lie in public life.

Labor leader Anthony Albanese accused Mr Morrison of misleading voters after a campaign blitz in which both leaders tried to win voters in NSW and Victoria in a foretaste of next year’s federal election. 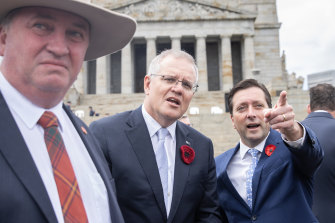 Prime Minister Scott Morrison says he does not believe he has told a lie in public life.Credit:Simon Schluter

Less than two weeks after French President Emmanuel Macron branded Mr Morrison a liar at the G20 summit in Rome, the Prime Minister was asked on Melbourne radio station 3AW whether he had ever told a lie in public life.

“I don’t believe I have, no,” Mr Morrison said.

Asked about claims by former prime minister Malcolm Turnbull that he had lied on many occasions, Mr Morrison dismissed the remark as a sledge.

“I’ve learnt in public life over a long period of time to not have a thin skin and to not get bitter, to just stay focused on the job,” he said.

The row over honesty came after Mr Morrison announced a policy to spend federal money building charging stations for electric vehicles, reviving a debate over his claims at the last election that Labor would “end the weekend” by encouraging people to buy EVs.

Mr Morrison said on the Seven Network on Thursday that the Labor policy was to “force” people to adopt EVs but the Labor plan was only an aspirational target for EVs to make up half of new car sales by 2050, with no mandate.

Mr Morrison said on the Nine Network the same day that Labor wanted to “put up your petrol prices” but the Labor policy only called for a consultation on changes to vehicle emission standards, without naming a timetable to end years of federal review into whether to bring Australian standards into line with Europe.

Mr Morrison also said Mr Albanese had “backed in the Chinese government” but Mr Albanese said on Thursday he supported the stated approach of United States President Joe Biden in seeking “competition without catastrophe” after China had changed its posture in recent years.

Labor deputy leader Richard Marles rejected a public call from former prime minister Paul Keating for an approach to China that recognised Taiwan was not a vital interest for Australia.

“I mean, if you’re serious about national security matters, Labor should condemn him and they won’t.

“And it shows within the inner core of the Labor Party a real weakness when it comes to national security.”

Mr Albanese argued that voters should put no weight on Mr Morrison’s words when the Prime Minister had no regard to what he had said in the past.

“Consistently, Scott Morrison is someone who himself doesn’t have regard for his own words of yesterday. And therefore, Australians should not trust what he says today.

The Prime Minister and the government hold a narrow lead over Labor and Mr Albanese on trust and honesty in the Resolve Political Monitor, published each month by The Sydney Morning Herald and The Age last month.

The survey of 1,603 voters found that 26 per cent considered the Liberals and Mr Morrison to be honest and trustworthy compared to 20 per cent who said the same for Labor and Mr Albanese, with 41 per cent undecided and others choosing someone else.

Perceptions about honesty worked in Mr Morrison’s favour at the last election, when 49 per cent of voters considered him to be honest compared to 34 per cent for the Labor leader at the time, Bill Shorten, according to the Australian Election Study produced by the Australian National University.

The study, based on questions to voters soon after the election, found that 46 per cent of voters thought Mr Morrison was trustworthy compared to 30 per cent for Mr Shorten.