Home » Lifestyle » Vaccine concerns ease, but only slightly, as 26 per cent say unlikely to get jab

Vaccine concerns ease, but only slightly, as 26 per cent say unlikely to get jab

Vaccine concerns have eased slightly after new coronavirus outbreaks, with the number of adults who say they are unlikely to be vaccinated falling from 29 to 26 per cent.

More Australians are getting their first doses, completing two doses or registering with authorities to be vaccinated, taking this group to 48 per cent of adults in a new survey.

Another 26 per cent say they are likely to be vaccinated in the months ahead, signalling a small gain in support for the program after Victorian lockdowns and concerns in other states about COVID-19 spreading in the community.

The Resolve Political Monitor, conducted for The Sydney Morning Herald and The Age by research company Resolve Strategic, finds majority support for vaccination but highlights the obstacles in signing up the last quarter of adults.

“Encouragingly, over the last month we see a significant jump in the number of adult Australians taking up their first vaccine jab and a flow through to new registrations to do so,” said Resolve director Jim Reed.

“However, we still see 26 per cent of Australians are hesitant to get vaccinated, down from 29 per cent last month, so this has not been greatly shifted by the Victorian outbreak.”

The Resolve Political Monitor showed last month that older Australians and women were more hesitant than men to sign up for the vaccine according to responses from people who had not already had a vaccine or registered for one.

The latest results have a margin of error of 2.5 per cent and come from questions asked of 1600 voters online from June 8 to 12.

Health Minister Greg Hunt said on Tuesday morning that 5 million adults had received a first dose and another 800,000 had received two doses.

“As of last week, we’d offered first doses in 100 per cent of aged care facilities around the country and second doses have come around in 94 per cent of those,” he said.

“And so on all of these fronts, what we’ve done is prioritise according to supply and the risk of individuals. But as your eligibility comes up, if you can come forward, please keep doing it.”

Labor has attacked the government for missing its original targets, with disability services spokesman Bill Shorten saying the country did not have enough supplies when it needed to get at least 75 per cent of people vaccinated.

“This is more of a stroll-out vaccine than a rollout vaccine. I mean, come on, let’s just fire up and get it done,” Mr Shorten said on Tuesday.

Federal figures show 61 per cent of people over 70 have received at least their first dose. The next phase of the program will enable more than 4400 general practices to administer the Pfizer vaccine while another 850 rural and regional clinics and 1000 pharmacies will deliver Moderna injections from October.

The latest Resolve Political Monitor was conducted in a period that included news reports about the death of a NSW woman, aged 52, from a severe form of the thrombosis with thrombocytopenia (TTS) clotting disorder two weeks after receiving her first AstraZeneca dose.

The country’s peak vaccination experts, known as the Australian Technical Advisory Group on Immunisation, confirmed AstraZeneca remains the vaccine of choice for people over 50 after considering the latest case.

The fatality rate for the disorder has dropped steeply through the course of this year, with doctors detecting more cases due to better screening and treatments improving dramatically. 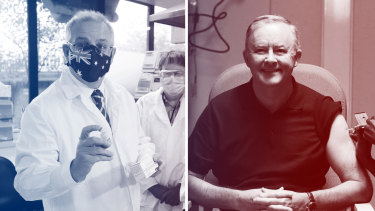 The Resolve Political Monitor only a small drop in the number of people who say they are hesitant about getting the coronavirus vaccine.Credit:Pool via NCA NewsWire, Alex Ellinghausen

“We’ve had 3.6 million doses of this vaccine [and] two tragic deaths but, other than that, mostly this has worked well and continues to work well and with great safety,” Chief Medical Officer Professor Paul Kelly said last week.

But concerns about side effects remain strong among those who are reluctant to take a COVID-19 vaccine after months of debate among health experts and widespread media reporting of each blood clot case.

“The reasons for hesitancy have not changed, with nervousness and uncertainty about side effects, not knowing enough and wanting to wait until more people go before them all cited frequently,” Mr Reed said.

“Again, this is sometimes coupled with the idea that there is no rush given Australia’s isolation and relatively low case numbers, with outright opposition to vaccines or physical barriers relatively rare.”

Among this subset, only 5 per cent said they were opposed to all vaccinations.