PARIS — Some people coped with lockdown by baking banana bread or taking yoga lessons online. For Vanessa Seward, salvation came in the form of painting.

What began as a pastime has turned into a second career, as the designer prepares for her first exhibition in Paris. Four of her paintings will be featured in “Just Think About It,” a group show that opens at the Mouvements Modernes gallery on Tuesday and will run until June 22.

Stores Reopen for Shoppers in LA and NYC

“I don’t like not working, and I have a husband who’s always very busy and doing lots of things. And I had this kind of creative thing in me which was bursting,” Seward recalls. As an outlet, she and her daughter, who is now 11, started taking painting classes with her mother.

“It’s very refreshing to draw with a child. I think if I went to an art class, I would be much more worried and self-conscious. But a child, she doesn’t care, she just does it. It frees you,” she says. “I just fell in love with oil painting. I had never done it before, and it was like a real revelation, and my mother was also very encouraging.”

Spurred on by friends like fellow designer Jean-Charles de Castelbajac, Seward started posting her art on Instagram. Before long, gallerist Sophie Mainier-Jullerot came knocking. She’d been impressed by a portrait that Seward did of the daughter of a common friend.

“Knowing that person, I could see that Vanessa had managed to capture her personality, her soul in the painting. That’s what drew me initially to her work,” Mainier-Jullerot says. 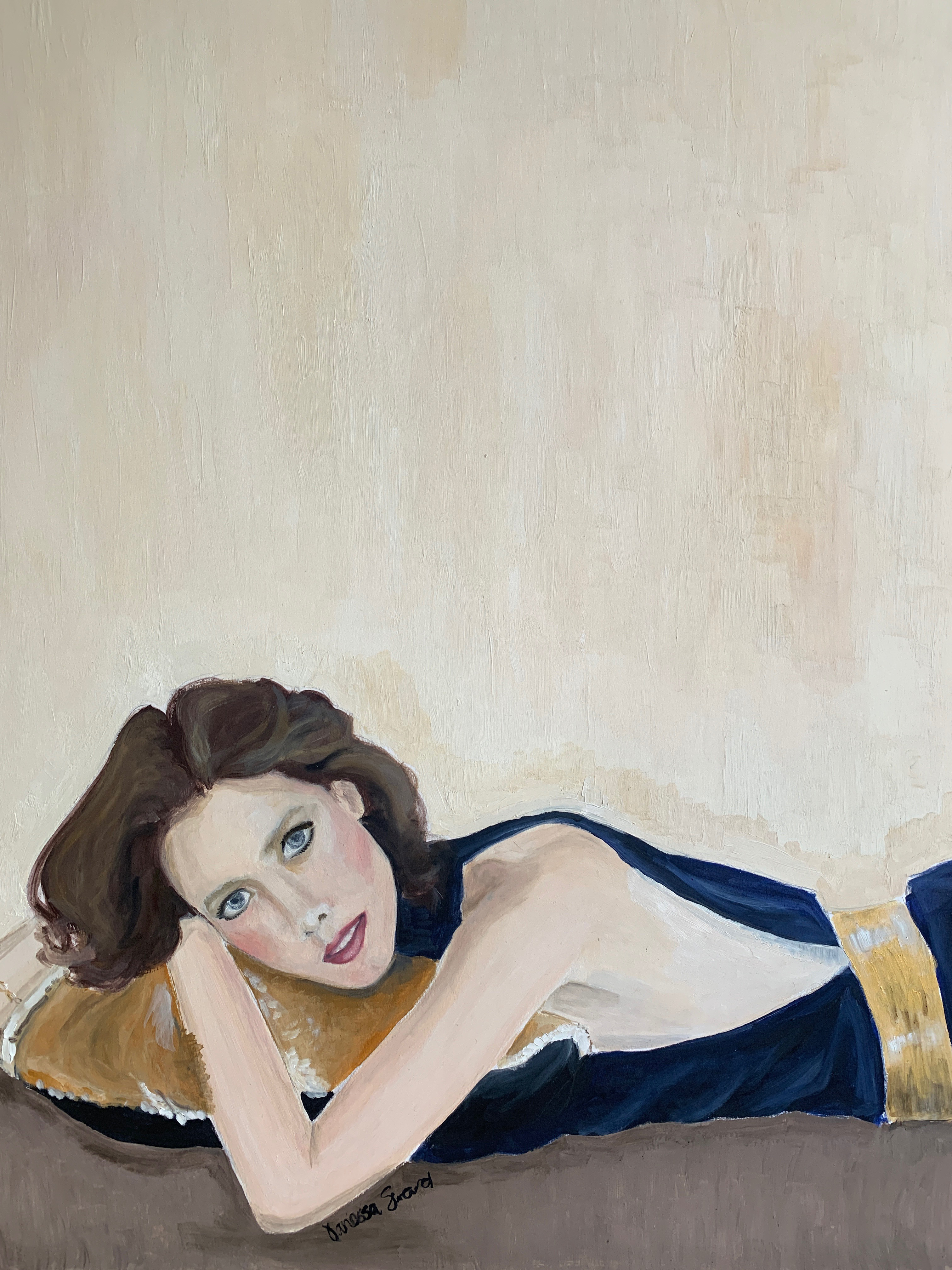 “The girls were always very glamorous, and they had this kind of sensuality which I find is difficult to find these days, because it’s either too provocative or too intellectual,” Seward says. “They dressed themselves. You don’t feel like everything was a production. There’s a spontaneity and a fragility which I try also to find. Sylvia Kristel, you feel like there’s something a bit broken.”

Unlike so many paintings that seek to capitalize on the glossy aura of fashion photographs, Seward’s portraits draw you in. “I’ve always been interested in women more than clothes, in a way. I design clothes because I know it can help women, because they helped me to have confidence in myself. Now more than ever, I’m interested in the woman, in the person I’m painting,” she says. 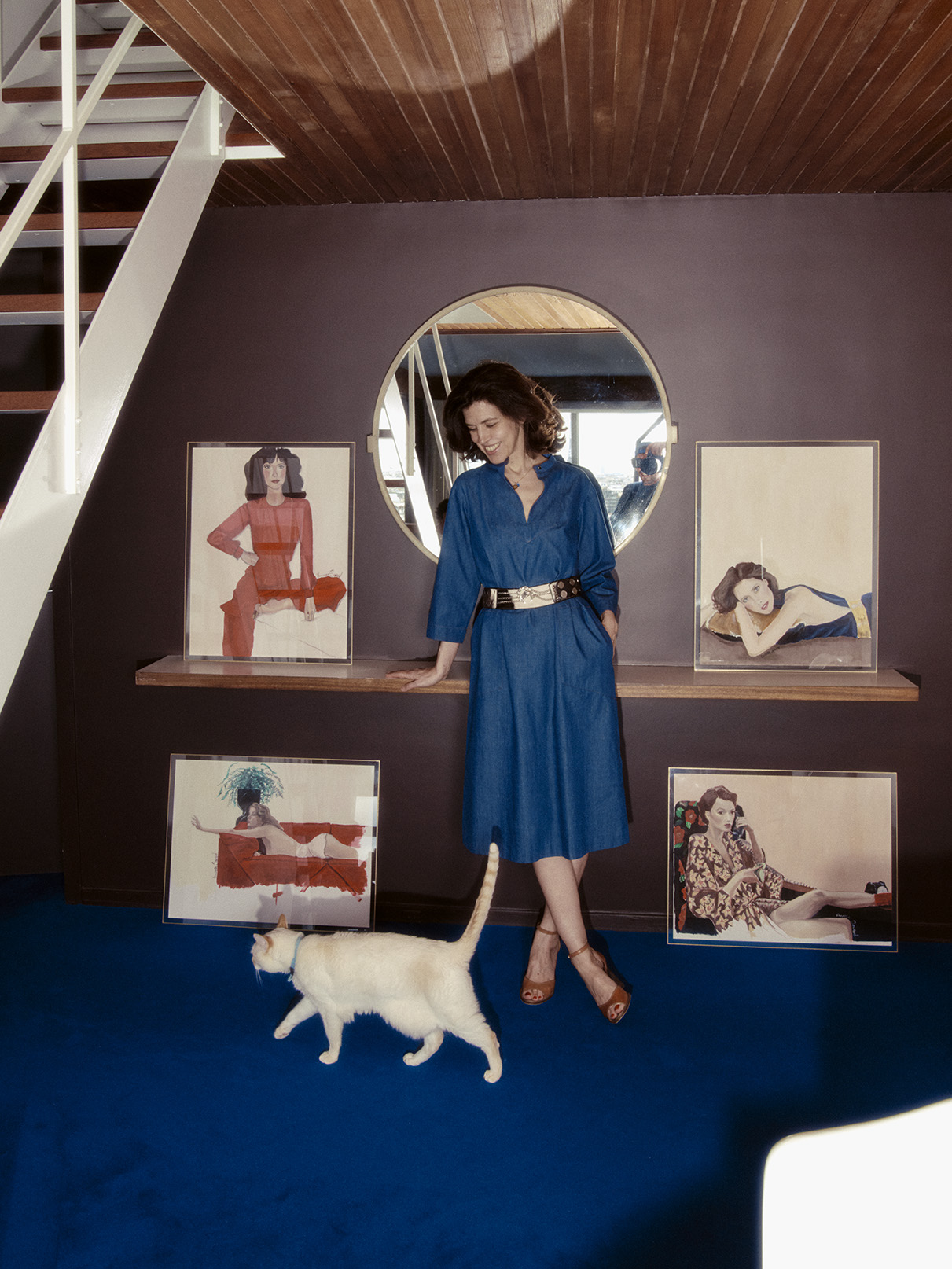 Mainier-Jullerot says the paintings chime with the designer’s aesthetic. “It’s still Vanessa Seward — she has just changed medium,” she says. “I was quite surprised that as a beginner, she already has such a strong identity. She has a distinctive style, a way of doing portraits that is very much her own.”

Seward was interested in exploring the melancholy side of beauty. “I’ve always been a bit obsessed about women in their prime, when they’ve got this power that sensuality gives them, which kind of fascinates me, and at the same time, there’s a little sadness sometimes in the eyes — maybe the fact that they know it’s their prime,” she explains.

“These women were a bit like an idealized alter-ego of me. I was there, wearing the same jeans and T-shirt, like everybody, putting on less and less makeup, and kind of felt my femininity, my glamour, oozing away, so I guess it was also a way of capturing something, unconsciously — the same way as when I draw my fashion sketches, they often look like me,” she remarks. 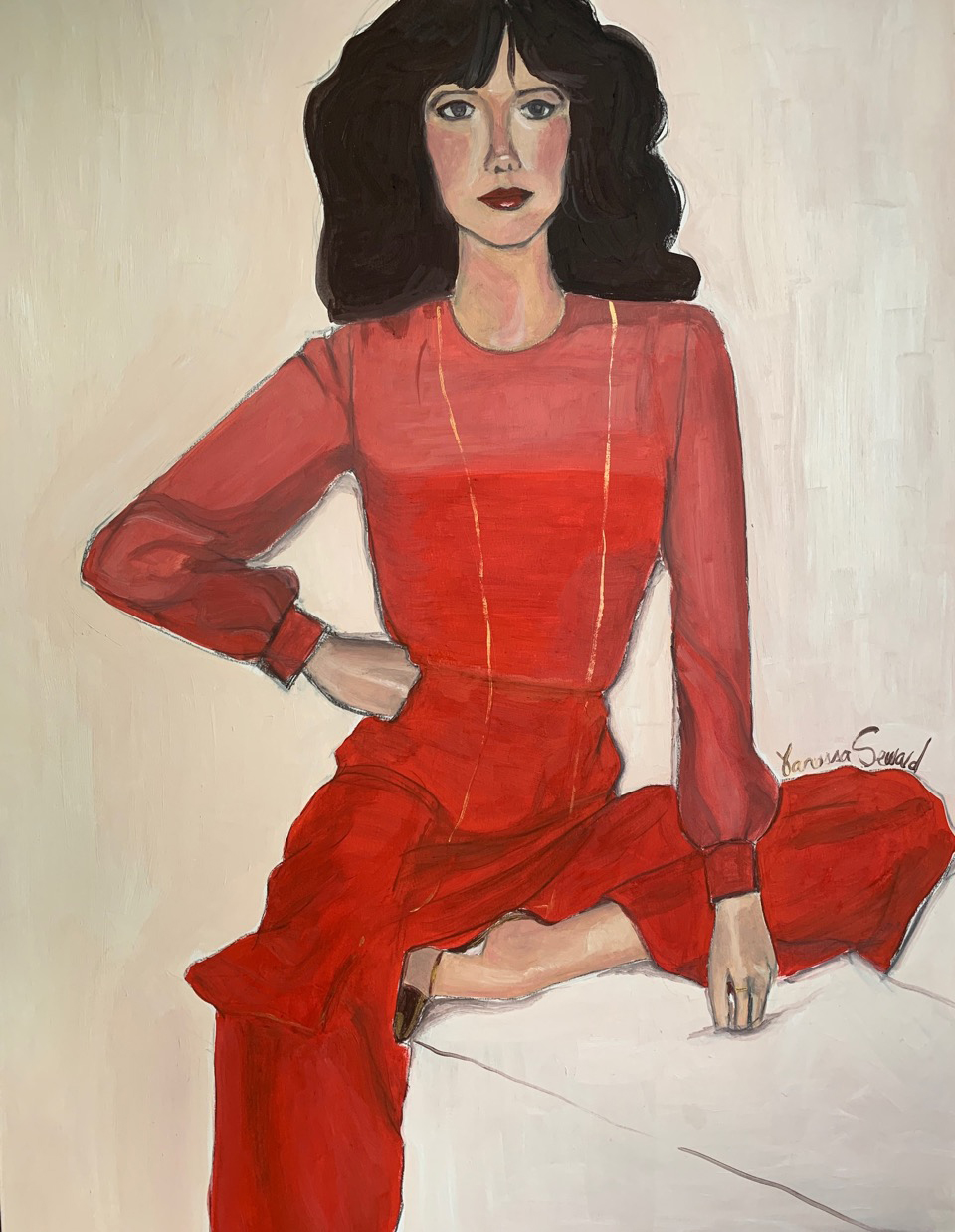 Seward’s first chance to test the market for her work came last month, when a painting she contributed to a charity auction sold for 2,000 euros, making it one of the star lots of the sale.

The exhibition at the Mouvements Modernes gallery pairs the work of five painters with 20 pieces of furniture from the ’80s and ’90s, reflecting the heritage of the gallery’s founder Pierre Staudenmeyer, who promoted designers including Garouste & Bonetti and Martin Szekely. Seward’s paintings are priced at 4,500 euros each.

It’s a new kind of exposure for the Argentina-born designer, who graduated through the ranks of Chanel and Yves Saint Laurent to take the creative helm of Azzaro in 2003, and eventually launch her own label in 2015 with the backing of A.P.C. founder and owner Jean Touitou.

“With fashion, you can’t work alone, even if as a designer, you have the vision, you draw. You work with so many people and everyone has their things to say. That is the great thing about painting right now. It’s my vision, take it or leave it. You have to compromise less, but it’s much more scary,” she says.

“Just putting what I painted recently on Instagram, it was such a step from that, because it’s raw. There’s no filter, but in a way, it’s good. I feel in a way like I’m taking back ownership of my work,” she adds. “I feel it’s a time for new challenges and to get out of your comfort zone. It’s a scary world out there, you feel everything is changing.”

The seismic shifts in the fashion industry since the start of the coronavirus pandemic have made Seward hesitant about reviving her brand, even if she hasn’t quite shelved the idea. “My name belongs to me. I just saw the ‘Halston’ miniseries, and I realized how lucky I was, and that’s thanks to Jean Touitou,” she says.

“I have thought about maybe relaunching it, but not really working so much right now, it’s not really the moment because I simply can’t afford it. I could find investors, but I am a bit reluctant. It is such a question of meeting the right person, and trust and all those things,” she explains.

“I think I do have a style, and I have been very touched since I stopped the brand, because I have lots of clients which are very faithful and which follow me, which are always encouraging me,” she adds.

Her last collaboration with La Redoute for spring 2021 includes items like an ultra-chic denim dress, which she’s wearing on the day of the interview with a vintage Argentine belt. Seward has so many clothes she’s had to rent a studio in the building just to store her collection. She is open to working with other brands.

“I’d love to do a collaboration. I do want to go back to luxury, too, because, after all, I do come from luxury,” she offers. “It’s much more difficult to do desirable clothes at very inexpensive prices.” At 51, the designer remains the best ambassador for her style, as her flawless hallway selfies can attest. But she’s not immune to peer pressure.

“This is why also it interests me to step away a bit from fashion, because I did feel that fashion is not a good place, especially as a designer or someone in front, to get older. It’s a place where you feel you always have to be on top of the game. With painting, I feel that it’s something where it doesn’t really matter so much what you look like,” she says.

She’s even branching out into writing, contributing a chapter — and two illustrations — on Britain’s Prince Charles to a book about masculine style coming out next fall. “I love his thing of ‘buy once, buy well.’ He keeps his suits for ages and he patches them, and he’s doing a lot of things for sustainability,” she explains.

It’s all part of a new cycle of reinvention for the designer. “I feel like a cat, that I’ve fallen again on my feet. I don’t know where it’s going to take me, but it’s good,” she says. “It’s kind of good to think that, as a woman, you can have several lives.”

Dirk Van Saene Has Turned His Hand to Painting, Sculpture