Victorian Socialists candidate Roz Ward is clearly having a bit of fun with this state election.

Ward, no stranger to controversy, is best known for being co-founder of the Safe Schools program, which became the target of conservative religious and social opprobrium. 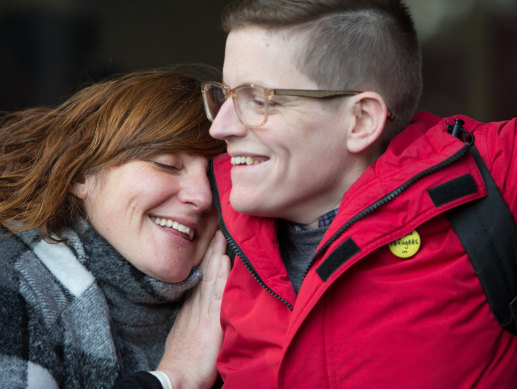 Roz Ward ws embraced by a supporter on her return to La Trobe University in 2016.Credit:Jason South

Ward was also suspended by La Trobe University in 2016 for calling the Australian flag “racist” in a Facebook post.

Her suspension was condemned by the National Tertiary Education Union, which accused the university of taking part in an “anti-intellectual, anti-democratic attack” on the academic. La Trobe lifted the suspension days later. 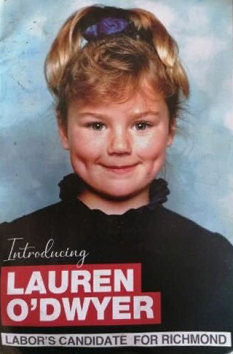 Ward now works at Deakin University and is running as the Victorian Socialists’ candidate in the marginal seat of Richmond. She has little chance of winning, but clearly hasn’t lost her sense of humour.

This week, with tongue planted firmly in cheek, she released an advertising pamphlet parodying one released by Labor’s Lauren O’Dwyer.

O’Dwyer’s small booklet, with a photograph of her as a child on the cover, is titled: “Introducing Lauren O’Dwyer, Labor’s candidate for Richmond”.

Inside the booklet she is fully grown, cuddling her daughter and their dog on a couch. Beneath the title “A bit about me”, it reads: “I’m raising my daughter, and our dog, Patti Smith, in Fitzroy. I work as a leader in our thriving creative industries sector. I’m a Yorta Yorta woman and an out and proud member of Melbourne’s LGBTIQ+ community. 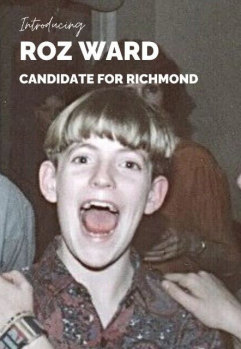 “I coach junior footy in Fitzroy, play in the Reclink Community Cup, am a board director for PBS and my daughter goes to school locally. I’m proud to have the opportunity to represent the community I love.”

Ward’s rejoinder similarly has a photo of the activist as a young person on the cover, and is titled: “Introducing Roz Ward, Candidate for Richmond”.

Inside, beneath the title “A bit about me”, it reads: “I try to take selfies with my family but they conspire against me.

“I’ve been very gay and very socialist for a very long time. I go to work, watch TV, and cook a lot of pasta and oven chips as it’s all my child will eat.

“I think rich people should pay a lot more tax and that billionaires should not exist.”

This story is part of our in-depth local coverage of the key seats of Melton, Hawthorn and Richmond at the November state election.