Partying on her own terms! Meryl Streep had a little fun with some of her famous pals while in quarantine amid the coronavirus pandemic recently, and the celebration was in honor of a very special occasion.

The Devil Wears Prada star, 70, drank her fair share of alcohol on Sunday, April 26, as she marked legendary composer Stephen Sondheim’s 90th birthday with pals Audra McDonald and Christine Baranski in a lengthy YouTube video — all while clad in a bathrobe. 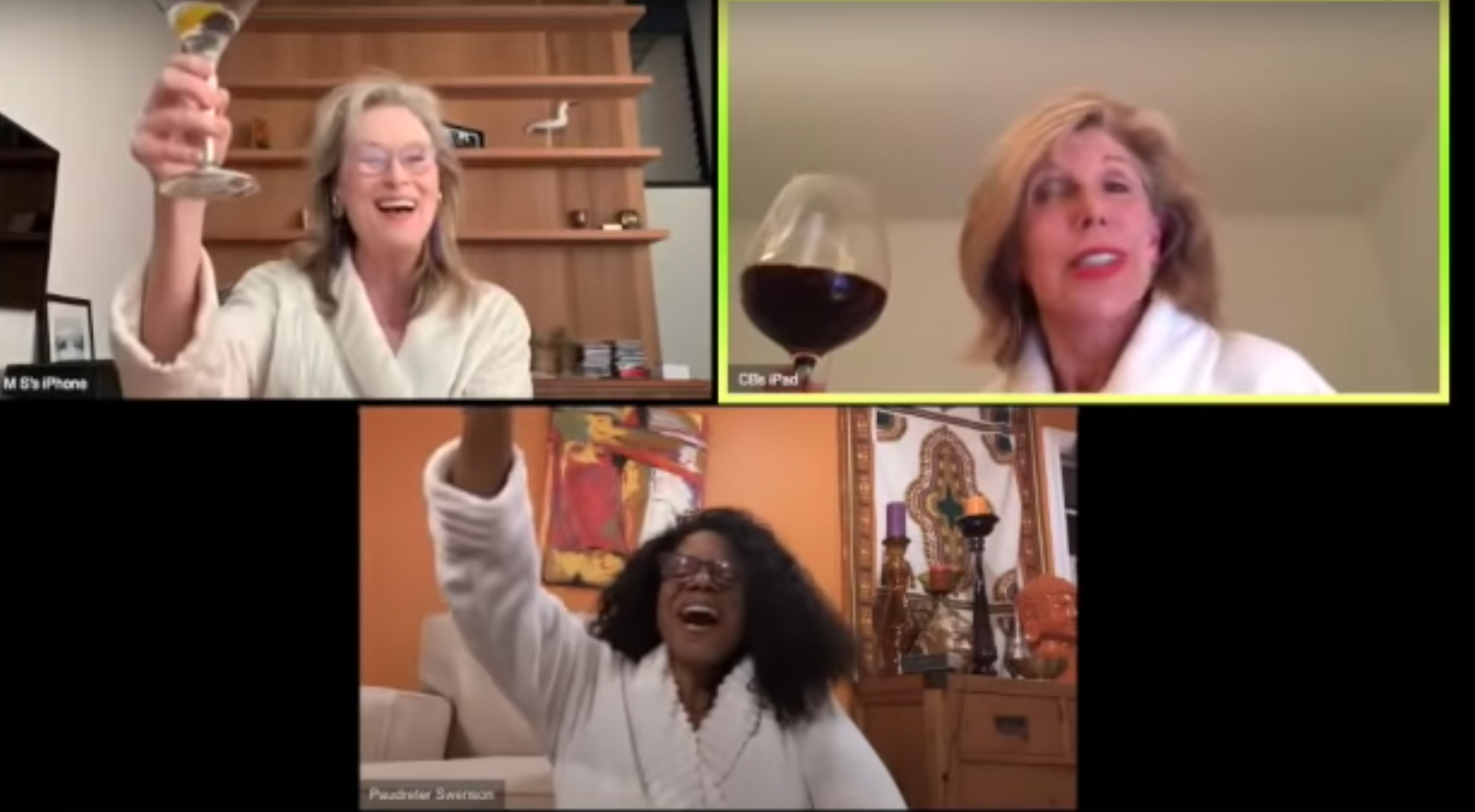 The talented trio were just some of the dozens of stars who participated in a special tribute to Sondheim and his numerous contributions to the world of musical theater. The free online event, which was hosted by Raúl Esparza and clocked in at over two hours long, aired on Broadway.com and YouTube.

Baranski, 67, kicked things off by singing the opening lyrics of the song, “The Ladies Who Lunch,” from the Sondheim musical, Company.

While Streep poured herself what looked like a martini (vigorously shaken for several seconds, not stirred), her Mamma Mia costar helped herself to a large glass of red wine. For her part, McDonald, 49, went straight for a bottle of what appeared to be vodka, which she opened while singing. 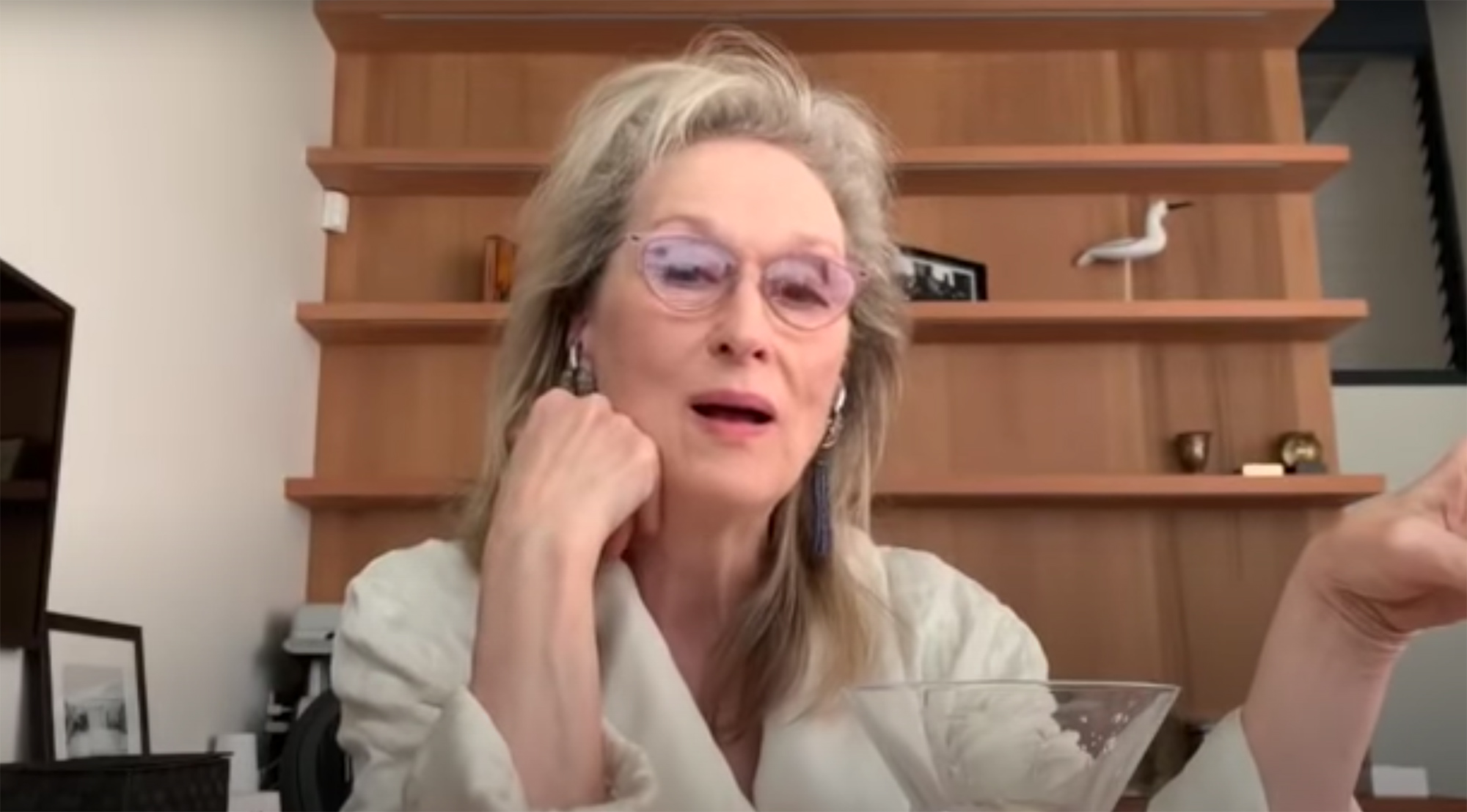 At one point during the rousing rendition of the popular tune, Streep looked as if she were about to pour some scotch into her now-empty martini glass. However, she then decided to cut to the chase and swigged the booze straight from the bottle instead.

Later, as the ladies sang the line, “I’ll drink to that,” they each raised their respective glasses in salute to Sondheim, who has been nominated for 11 Tonys (and won seven) for his work on musicals such as Follies, Assassins and Into the Woods. Streep played The Witch in the 2014 film adaptation of the latter work.

“We love you, Steve!” the Oscar winner declared during the song’s final bars.

For many, the tribute (and specifically Streep’s role in it alongside Baranski and McDonald) served as a much-needed source of joy amid the ongoing coronavirus outbreak.

“I’m DYING. This is PERFECTION,” one social media user declared in the video’s comments. Added another viewer via Twitter: “Meryl Streep, Audra MacDonald and Christine Baranski singing Sondheim over Zoom in their bathrobes is, and I cannot stress this enough, the ultimate mood.”

Proceeds of the virtual concert will benefit Artists Striving to End Poverty (ASTEP) during the coronavirus pandemic, according to CNN. Other stars who participated on Sunday included Lin-Manuel Miranda, Neil Patrick Harris, Jake Gyllenhaal and more.

Given the constantly evolving nature of COVID-19, Us Weekly wants our readers to have access to the most accurate resources. For the most up-to-date coronavirus information, guidance, and support, consult the CDC, WHO, and information from local public health officials. If you’re experiencing coronavirus symptoms, call your primary care provider for medical advice.