What is EMDR? The ‘bizarre’ therapy helping Prince Harry heal

When Prince Harry spoke earlier this week about how he has undergone a controversial type of psychotherapy to heal from longstanding trauma and anxiety, the world took notice.

What exactly, we all wondered, is Eye Movement Desensitisation and Reprocessing (EMDR)? What happened when he closed his eyes, crossed his arms, and tapped his own shoulders while thinking of traumatic memories – as we saw in a scene from one of his therapy sessions in the documentary series, The Me You Can’t See? The Duke of Sussex said he has turned to the therapy to resolve fears and anxiety he’s suffered since his mother’s death in a car accident in 1997 when he was 12. (“London is a trigger, unfortunately,” he says, in one episode. “Because of what happened to my mum, and because of what I experienced and what I saw.“)

But what does EMDR, which was once called “yet another of the crazes that have always plagued psychiatry” (by trauma expert Bessel van der Kolk) – and which has in the last couple of years been labelled everything from “strange” to “funny” and “sounding like witchcraft” – accomplish? And why is it growing in popularity? 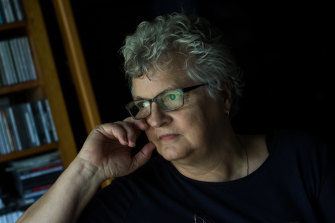 For Charmaine Belterman, EMDR therapy finally provided relief from trauma after decades of other treatments.Credit:Justin McManus

For Charmaine Belterman, the answer is simple: EMDR did what seven years of psychiatric treatment, cognitive behavioral therapy (the gold standard psychological treatment), and mindfulness training could not: put an end to decades of depression, periodically feeling suicidal, and various “breakdowns” that made her life hell.

“I test it, I bring up a trauma, and there’s nothing there,” says Belterman, a 64-year-old retired nurse from East Warburton, Victoria, by which she means that she feels “no disturbance” when she recalls the traumatic memories that used to plague her. She has lots. A survivor of childhood sexual abuse and other traumas, she spent more than five decades experiencing “a helluva lot of” restlessness, hopelessness, and self doubt. The mother of three lacked confidence, and, at one point, covered all the mirrors in her house with newspaper because she didn’t want to look at herself. Eventually, she was diagnosed with Complex Post Traumatic Stress Disorder.

But now? “I’m sitting here and I’ve got goosebumps, I’m excitedly shocked,” she says of her ability to recall a traumatic memory and feel no discomfort after three years of EMDR treatment. “I honestly believed, sincerely, I would not get over this until the day I die. I thought, you know what, this is coming to the grave with me.” 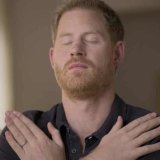 Prince Harry, practising EMDR therapy in the Apple TV documentary “The Me You Can’t See”.Credit:Apple TV

The key is the combination of a patient focusing on the crucial aspects of a traumatic memory – the picture, its meaning, and the associated feelings – while completing an additional “bilateral movement” task, says Dr Christopher Lee, one of Australia’s leading researchers of EMDR and an EMDR practitioner. Usually, this means the patient moves their eyes, from side to side, by following their therapist’s moving finger. Others, like Prince Harry, make tapping motions.

Practitioners believe that the bilateral movements disturb a person’s ability to focus on the memory – which has its roots in science. Over time, this helps the brain reprocess it as just another memory that doesn’t produce an emotional response. With the therapist’s coaching, the memory gains new, positive thoughts and emotions. (For instance, instead of horror and disgust a person might feel pride that they have been strong and survived.)

The therapy has decades of clinical evidence to support that it can be remarkably successful for treating PTSD, which is often marked by terrifying flashbacks in which a person feels they are re-experiencing a previous trauma again and again. In one recent study, published late last year in The British Journal of Psychiatry, 67 per cent of the 145 people who suffered from trauma as a result of childhood physical and sexual abuse, and who completed six to eight weeks of EMDR therapy, no longer qualified for PTSD diagnoses. A year later, 80 per cent of participants lost their diagnoses.

Many believe the positive effects of the treatment are permanent. Lee, an associate professor at The University of Western Australia, attests to its “very long term” results. “Once you start moving how trauma is stored in the brain, humans have amazing capacity to do their own healing from there.”

But, therapists still don’t know exactly why the therapy is as successful as it is.

One theory, says Lee, is that the bilateral eye movements trick the mind into experiencing a state similar to the Rapid Eye Movement (REM) sleep state, the four hours of sleep people typically get at night during which many memories are processed and no longer remain front of mind and vivid.

But this is just a theory, which goes back to why the therapy, he says, “has been considered controversial for a while”.

“It was considered a bit sceptically [initially],” says Professor Caroline Hunt, president of the Australian Clinical Psychology Association, of EMDR, which was originally founded in the late 1980s by the late American psychologist and researcher Francine Shapiro. “The story is a bit bizarre.” In a nutshell: while Shapiro was walking one day and thinking of a traumatic event, she flicked her eyes backwards and forwards and realised she felt better about the event. She used the method on her patients and found success.

But now, say both Lee and Hunt, the therapy is “mainstream” both here and overseas. In Australia, it is endorsed by the National Health and Medical Research Council, and Open Arms, the Australian Government support network for current and ex-Australian Defence Force personnel and their families, among other agencies. The United States-based International Society For Traumatic Stress Studies recommends it too.

“It’s definitely becoming more popular,” says Lee, adding that it can also sometimes be used effectively to treat other conditions like depression that’s been triggered by a recent crisis, childhood neglect, and extensive bullying, though there is less published evidence of its effectiveness to treat conditions outside of PTSD. “My books are closed. And I struggle to find [other EMDR] therapists” – for patients seeking the treatment – “who don’t have extensive waiting lists, unfortunately.”

One reason: the treatment, unlike cognitive behavioural therapy, can be quick. For a person with a single adult-onset trauma, treatment can sometimes be completed in a few hours. For people with complex and multiple traumas it can take years.

But regardless of how long it takes, Brendan Maccione can attest that, like Belterman, the impact can be life-changing.

“It’s almost as though it gives me that ability to deal with anything,” says Maccione, a 43-year-old Perth police officer, of a psychological tool his EMDR therapy gave him which has enabled him to continue his work. Maccione was diagnosed with PTSD in 2017; this stemmed, partly, from traumatic scenes he witnessed at work while tending to fatalities at car crashes and other crime scenes. Now, all he has to do is imagine himself placing white gridiron pads – those worn by American football players – on his shoulders before going to work. It is a form of “imagery rescripting”, which gives a person who has suffered trauma a new association to previous traumatic events. It immediately makes him feel calm. “The gridiron pads have become, I guess, my safety blanket, for want of a better word,” says Maccione, president of Sirens of Silence, a support group for emergency services personnel. “Now, if I go to a crash, or if I’m feeling anxious on the way to a job, I can simply close my eyes.”

It’s a long way from where he was: experiencing terrible flashbacks every time he showered or smelled paint. Furthermore, EMDR helped him to heal from unresolved traumas from his childhood.

“I tried all other types of therapies, sitting on the couch just talking about the way we feel, that’s all great, we all like to do that,” says Maccione, who no longer qualifies for a PTSD diagnosis. “But [until] I branched out [to EMDR], I realised I wasn’t actually treating the root cause.”

Most Viewed in Lifestyle