Back at the start of 2019, Britney Spears told the world that she was taking a break from performing, effectively canceling her Domination residency at Park MGM in Las Vegas in order to spend more time with her family. Spears made the announcement on social media, letting her fans know that she was heartbroken to have to cancel, tweeting “I had to make the difficult decision to put my full focus and energy on my family at this time. I hope you all can understand.” And she has certainly followed through with that plan; she has not performed nor has she recorded new music in more than two full years.

Fans have been anxiously awaiting Spears’ next move, many wondering if she will ever perform again. However, the “Piece of Me” singer has been going through a lot of personal things, particularly when it comes to her conservatorship. On June 23, Spears made a virtual appearance in open court and told the judge presiding over her case that she deserves a break — amongst other things, including that she’s been mistreated and abused by some of the people closest to her.

“Basically, this conservatorship is doing me way more harm than good. I deserve to have a life. I’ve worked my whole life. I deserve to have a two to three year break and just you know, do what I want to do,” Spears said, according to the full transcript provided by CNN. So, what’s really in store for Spears’ future?

A Britney Spears comeback could be bigger than ever before 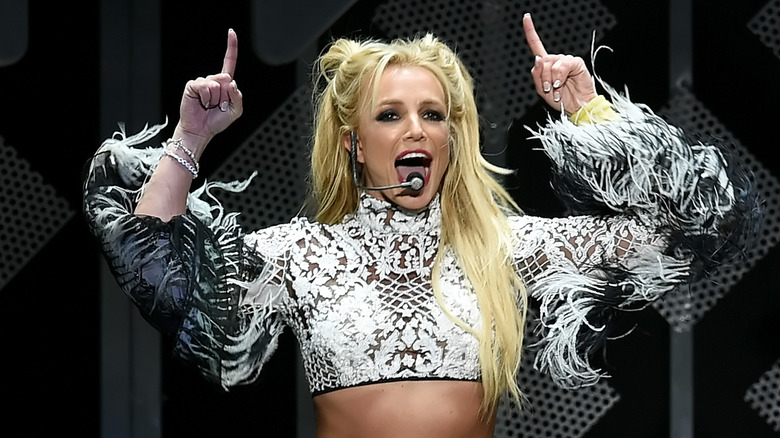 Britney Spears may not even be thinking of getting back on stage again, but if she chooses to make a comeback, it could be huge. Industry expert Ray Waddell told the Los Angeles Times that a potential Spears comeback would have her right back in the graces of hit singles and sold out shows. “I think we’ve barely scratched the surface as to how big Britney Spears can be as a live artist,” he told the outlet, adding that a Spears comeback could be “as big as she wants it to be.”

Spears is no stranger to raking in tons of money for her shows, and Waddell told the LA Times that another go around could be even more lucrative for the star. “Spears could sell out major arenas around the world, and possibly stadiums. I can’t speak to all the noise around her, but Britney Spears is an untapped goldmine as a touring artist. She could go out now and do $250-$350 million ticket sales on tour, and that’s conservative. There are a ton of variables, but the potential is definitely there,” he said.

For the time being, however, it seems clear that Spears needs to sort out her personal life and try to end her conservatorship. After that happens? The world will be her oyster.