Blue Origin will launch William Shatner, 90, into space TODAY equipped with artwork that Jeff Bezos made to ‘play Star Trek’ when he was 9-years-old, and a postcard to ‘inspire the next generation’

William Shatner will boldly go into space today on Blue Origin’s New Shepard rocket — taking with him artwork that Jeff Bezos made when he was nine to ‘play Star Trek’.

The 90-year-old actor will become the oldest person to ever go into space, and will be joined on his mission by Chris Boshuizen, Glen de Vries and Audrey Powers.

Originally set to depart yesterday, but delayed due to windy weather, the blast off from Launch Site One in Texas is now scheduled for 3pm BST (10am ET) today.

The NS18 rocket will be moved to the launch pad 7.5 hours before lift-off, will take on propellant fuel three hours before and its crew 35 minutes prior to ignition.

Its trajectory will take it more than 62 miles above the Earth — passing the ‘Karman line’ internationally considered ‘the edge of space — where the crew will experience three minutes of weightlessness before returning to Earth.

The rocket booster segment will separate from the crew capsule two minutes and 45 seconds into the flight, to touch down on a pad around two miles from the launch site some seven minutes after launch.

The capsule will parachute to a landing in the Texas desert, some 10–12 minutes after they first blasted off.

Alongside Mr Bezos’ childhood art, Mr Shatner will also carry a postcard to inspire ‘the next generation’.

Scroll down for videos 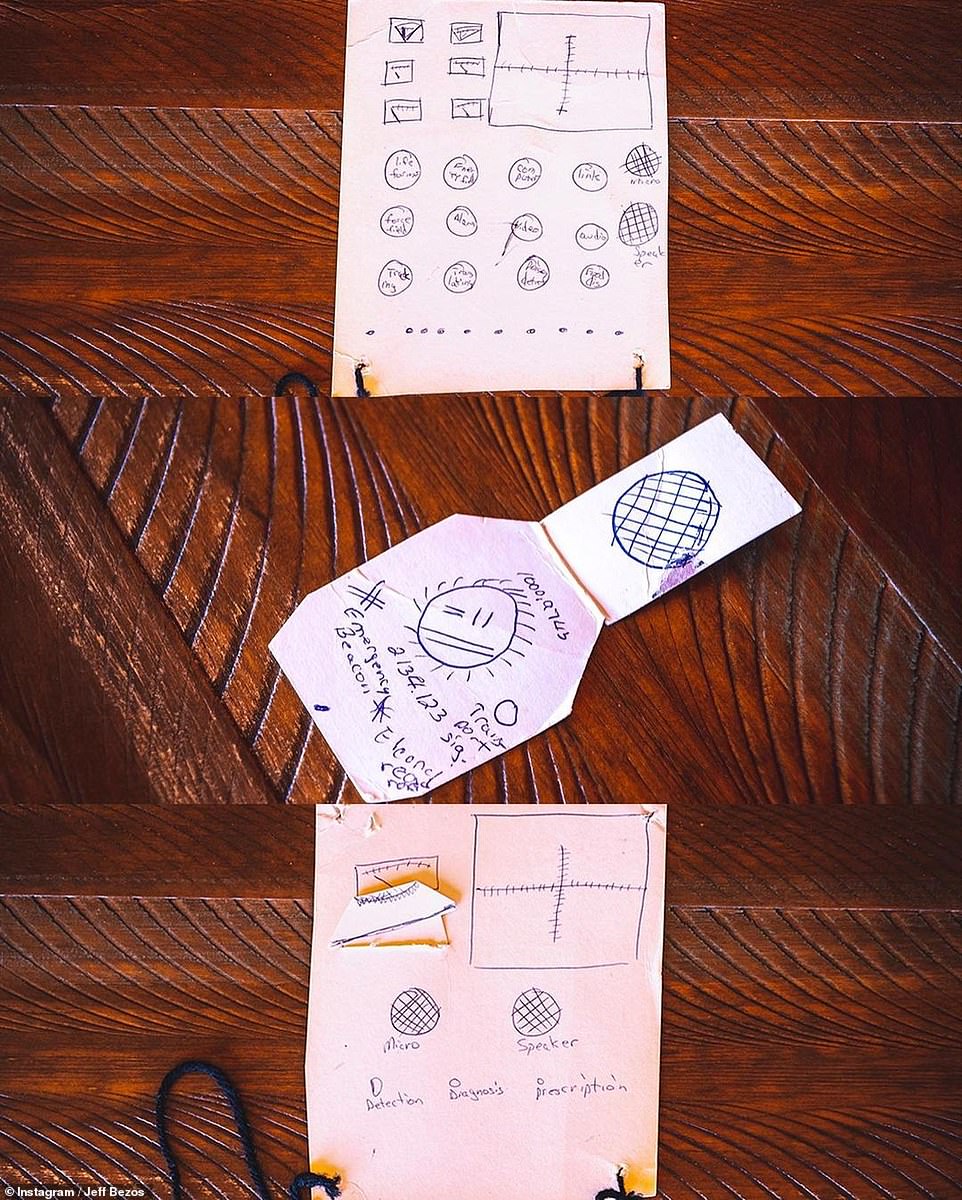 William Shatner will boldly go into space today on Blue Origin ‘s New Shepard rocket — taking with him artwork that Jeff Bezos made when he was nine to ‘play Star Trek’. Pictured: Mr Bezos’ art — with a hand-hand ‘tricorder’ device (top and bottom) and a communicator (middle) 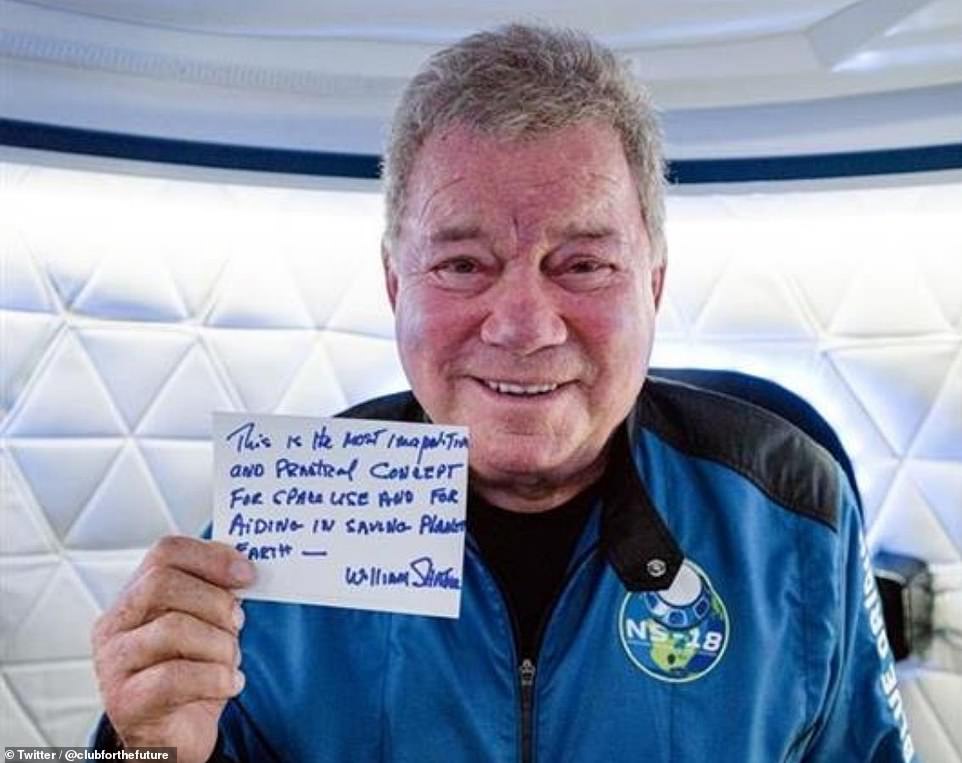 Alongside Mr Bezos’ childhood art, Mr Shatner will also carry a postcard (pictured) to inspire ‘the next generation’ as he blasts up to 62 miles (100 kilometres) above the Earth’s surface 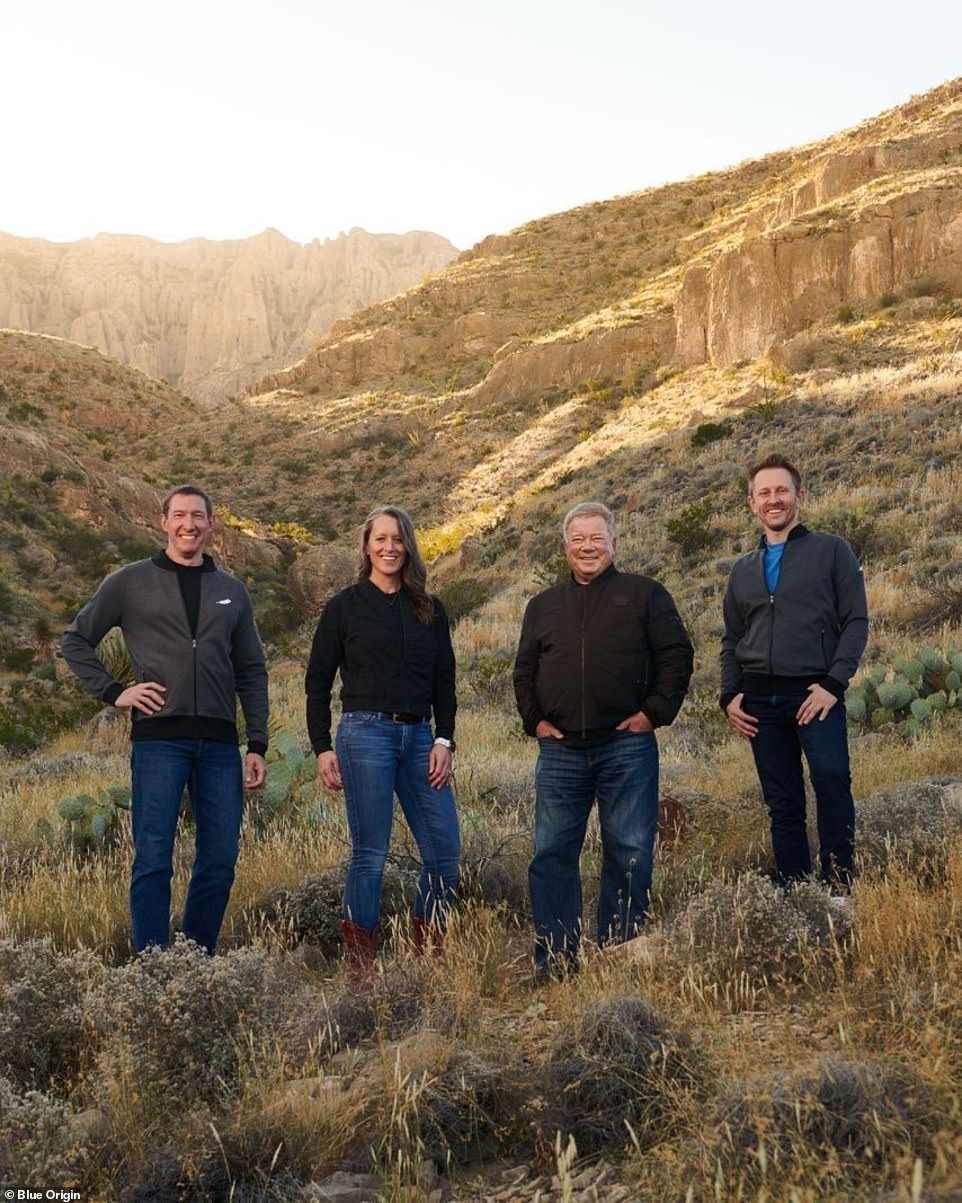 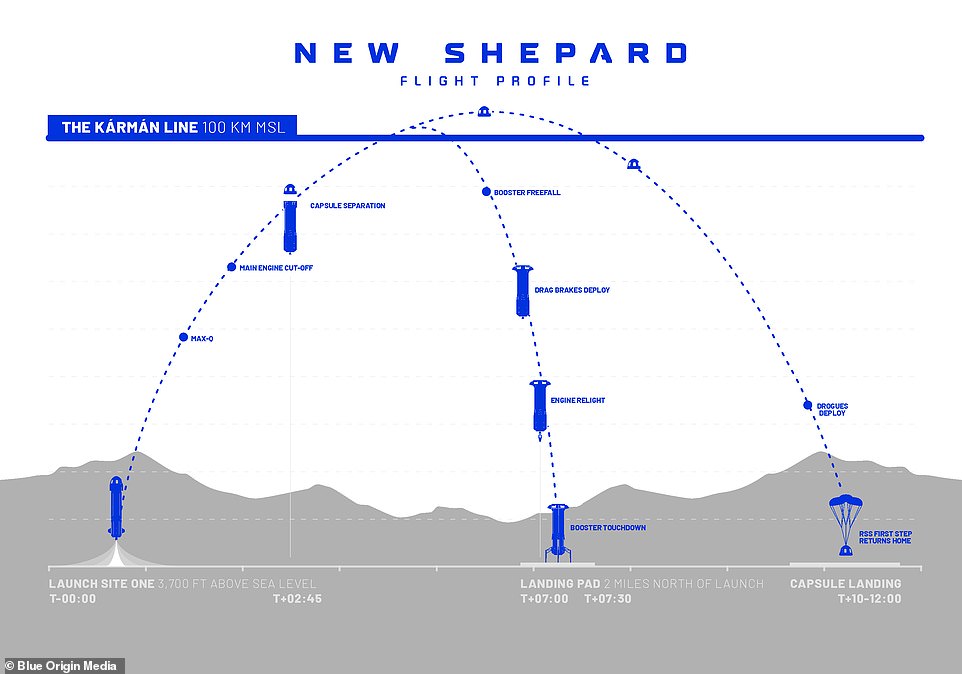 The New Shephard will travel beyond the 100km (62 mile) Karman line, defined internationally as the ‘edge of space’, where the crew will experience weightless for a few minutes before parachuting in the capsule back to the Texas desert 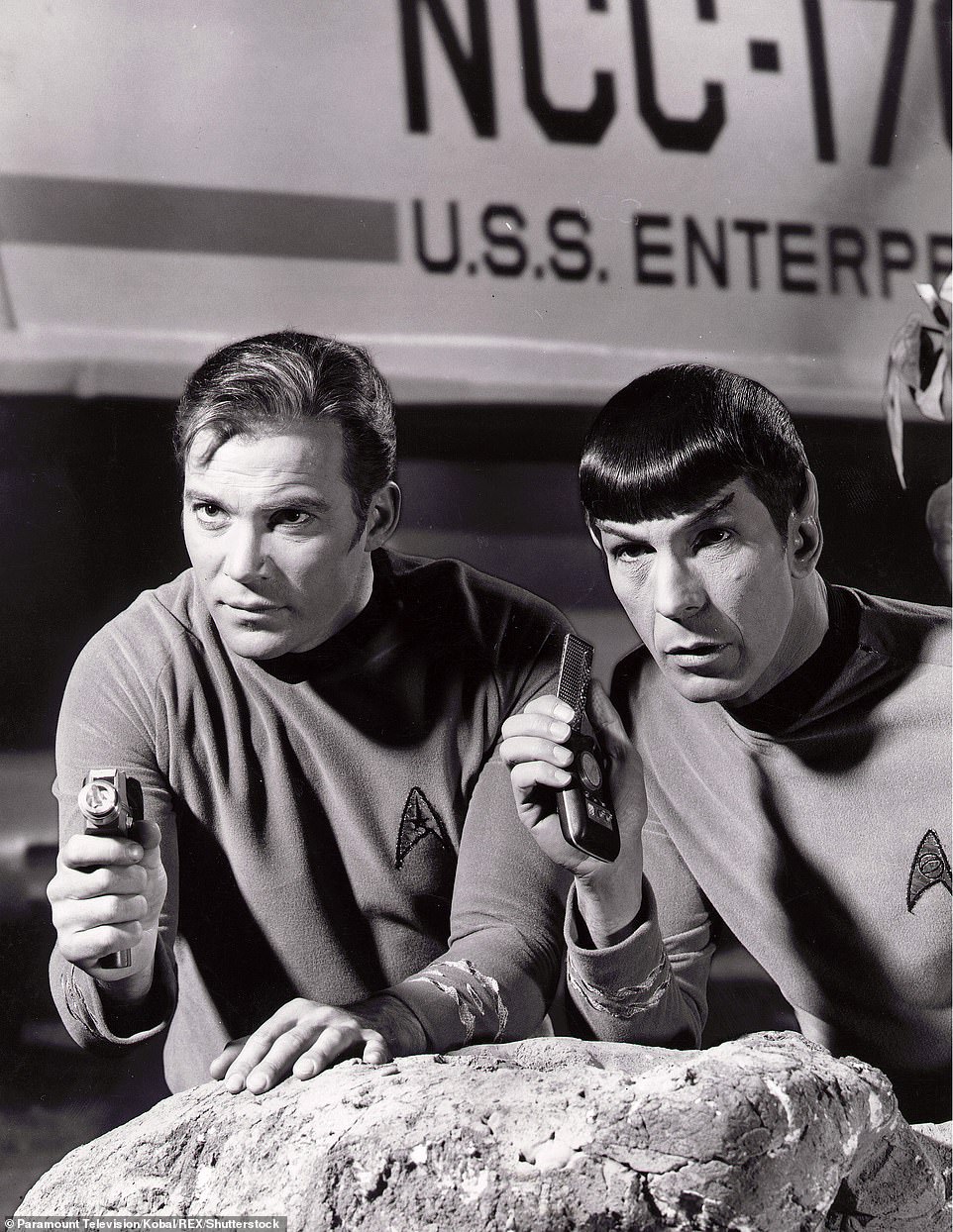 ‘I’m going to see the vastness of space and the extraordinary miracle of our Earth and how fragile it is compared to the forces at work in the universe,’ Mr Shatner told NBC’s ‘ Today ‘ program. Pictured: William Shatner as Captain Kirk in ‘Star Trek’. Leonard Nimoy’s Mr Spock can be seen holding a communicator, like the one replicated in paper by a young Jeff Bezos that Mr Shatner will be taking into space with him today

The 90-year-old Canadian actor shot to fame in the 1960s when he took on the role of James T Kirk in Star Trek the original series.

He will become the oldest person ever to travel to space when he launches.

Boshuizen is the co-founder of Planet Labs and partner at venture capital firm DCVC, and is a paying passenger.

He has a net worth of $30 million, and was Space Mission Architect at NASA’s Ames Research Center until 2012.

de Vries, who co-founded Medidata Solutions in 1999, said the spot on the New Shepard is a ‘dream come true.’

‘This is how innovation happens,’ he said in an interview ahead of launch.

‘The training itself was designed to do three things for our astronauts,’ Patrick said during a video interview.

‘The first thing is it’s designed to train them on the safety systems that we have onboard the crew capsule and the expected responses from the crew if we were to have an emergency.’

The second is to prepare the crew for the unexpected aspects of spaceflight such as strange noises, bumps and accelerations, Patrick explained.

The third part of training teaches the crew how to behave in zero-gravity inside the cabin without colliding with their flight mates, he continued.

‘I am very confident that we will learn tomorrow that this training has gone well for these four astronauts and we will be ready to launch them,’ said Patrick.

The four individuals are scheduled to pile inside a truck to the launch tower 45 minutes before lift-off.

The crew will then climb the tower, ring a bell that hangs at one end of the crossing and strap into the fully autonomous 60-foot-tall New Shepard rocket.

The will blast off from a base in the west Texas town of Van Horn on a journey to the edge of space.

‘I’m going to see the vastness of space and the extraordinary miracle of our Earth and how fragile it is compared to the forces at work in the universe,’ Mr Shatner told NBC’s ‘Today’ program.

The launch represents another crucial test of Blue Origin as it competes against billionaire-backed rivals — Elon Musk’s SpaceX and Richard Branson’s Virgin Galactic — to attract those willing to pay large amounts of money to experience spaceflight.

Branson beat Bezos to space by just 10 days, as he and an entourage soared 53 miles above Earth’s surface in July, however Bezos climbed two miles higher when he took to the skies.

Although Musk has yet to take the journey himself, his firm recently sent four civilians into orbit last moth for a three-day trip around Earth.

Musk has, however, purchased a seat on Branson’s space tourism rocket — but has yet to reveal when he will take the epic journey.

The New Shepard rocket is scheduled to rollout seven and half hours before lift-off, followed by propellant load three hours before and then the astronauts will load inside the capsule just 35 mins prior to take off 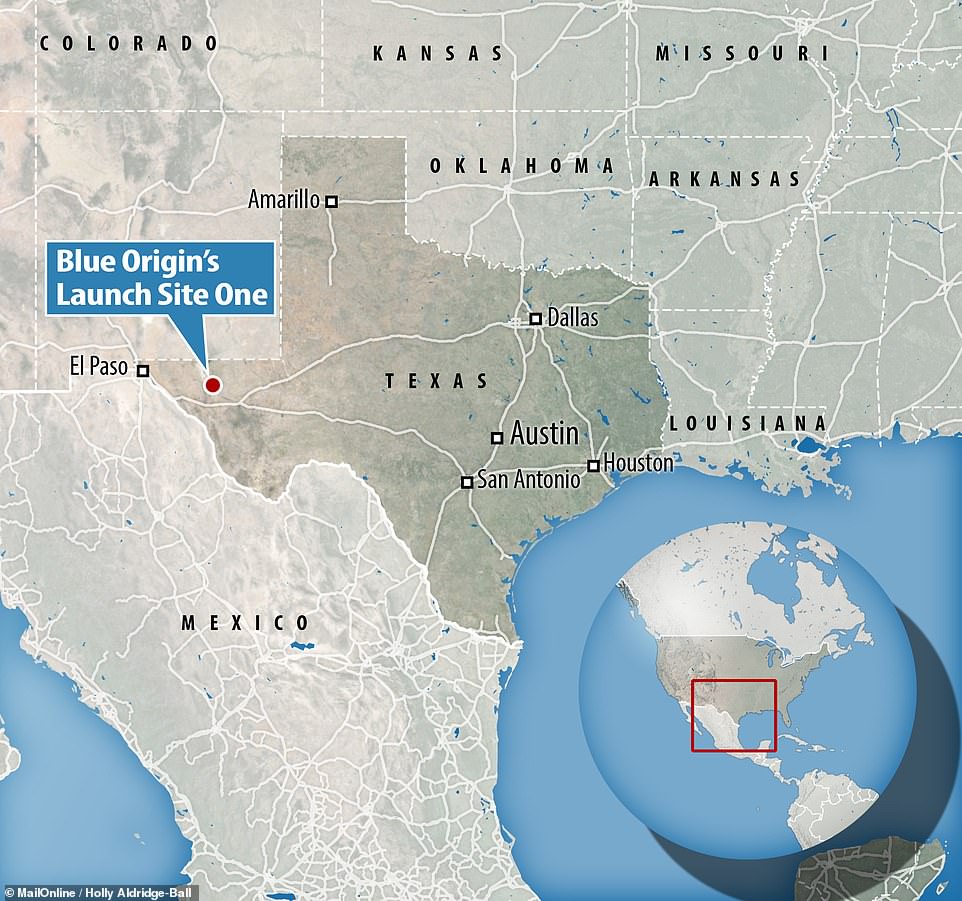 Originally set to depart yesterday, but delayed due to windy weather, the blast off from Launch Site One in Texas (as shown above) is now scheduled for 3pm BST (10am ET) today

THE BILLIONAIRE SPACE RACE: HOW BRANSON, MUSK AND BEZOS ARE VYING FOR GALACTIC SUPREMACY

Dubbed the ‘NewSpace’ set, Jeff Bezos, Sir Richard Branson and Elon Musk all say they were inspired by the first moon landing in 1969, when the US beat the Soviet Union in the space race, and there is no doubt how much it would mean to each of them to win the ‘new space race’.

Amazon founder Bezos had looked set to be the first of the three to fly to space, having announced plans to launch aboard his space company Blue Origin’s New Shepard spacecraft on July 20, but Branson beat him to the punch.

The British billionaire became Virgin Galactic Astronaut 001 when he made it to space on a suborbital flight nine days before Bezos – on July 11 in a test flight.

Although SpaceX and Tesla founder Musk has said he wants to go into space, and even ‘die on Mars’, he has not said when he might blast into orbit – but has purchased a ticket with Virgin Galactic for a suborbital flight.

SpaceX became the first of the ‘space tourism’ operators to send a fully civilian crew into orbit, with the Inspiration4 mission funded by billionaire Jared Isaacman.

His flight was on a Dragon capsule and SpaceX rocket built by space-obsessed billionaire, Elon Musk and took off for the three day orbital trip on September 16 – going higher than the International Space Station.

SpaceX appears to be leading the way in the broader billionaire space race with numerous launches carrying NASA equipment to the ISS and partnerships to send tourists to space by 2021.

On February 6 2018, SpaceX sent rocket towards the orbit of Mars, 140 million miles away, with Musk’s own red Tesla roadster attached.

SpaceX has also taken two groups of astronauts to the |International Space Station, with crew from NASA, ESA and JAXA, the Japanese space agency.

SpaceX has been sending batches of 60 satellites into space to help form its Starlink network, which is already in beta and providing fast internet to rural areas.

Branson and Virgin Galactic are taking a different approach to conquering space. It has repeatedly, and successfully, conducted test flights of the Virgin Galactic’s Unity space plane.

Branson has previously said he expects Elon Musk to win the race to Mars with his private rocket firm SpaceX.

SpaceShipTwo can carry six passengers and two pilots. Each passenger gets the same seating position with two large windows – one to the side and one overhead.

The space ship is 60ft long with a 90inch diameter cabin allowing maximum room for the astronauts to float in zero gravity.

It climbs to 50,000ft before the rocket engine ignites. SpaceShipTwo separates from its carrier craft, White Knight II, once it has passed the 50-mile mark.

Passengers become ‘astronauts’ when they reach the Karman line, the boundary of Earth’s atmosphere.

The spaceship will then make a suborbital journey with approximately six minutes of weightlessness, with the entire flight lasting approximately 1.5 hours.

Bezos revealed in April 2017 that he finances Blue Origin with around $1 billion (£720 million) of Amazon stock each year.

The system consists of a pressurised crew capsule atop a reusable ‘New Shepard’ booster rocket.

At its peak, the capsule reached 65 miles (104 kilometres), just above the official threshold for space and landed vertically seven minutes after liftoff.

Blue Origin are working on New Glenn, the next generation heavy lift rocket, that will compete with the SpaceX Falcon 9.